Purple People Mover: Sometimes a wagon is the only way to go 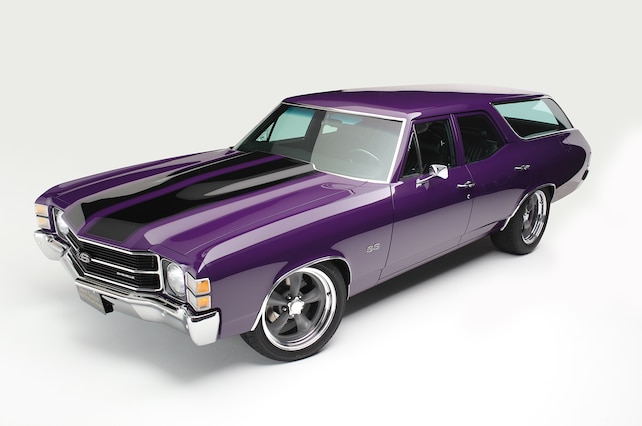 Even the most die-hard Chevelle fan has to admit that the typical array of two-door coupes and sedans tend to blend together after a while. Two-doors have always been the popular choice for classic Chevys. They carried the performance standard, from the Z-16 to the 454SS, and ruled the streets of America. So naturally everyone wanted the same.

As with any popular trend, there are always the rebels, the non-conformists, the budget handicapped A-body fans who want their car to stand out from the rest of the lemmings at a show or cruise night. These are the Chevy nuts that make us question their sanity, and our own place in the space-time continuum.

When a New York customer had a bile beige Malibu wagon shipped to his shop in San Antonio, Texas, Jeff Lilly was at a bit of a loss. Said customer had a large family and wanted a cool-looking vintage family cruiser that would light up the tires, handle well, and be a problem-free, drive-anytime, fun car.

Like most station wagons, this 1971 had seen a hard life. The first order of business for Lilly’s crew was to strip it down to its skeleton. The Nixon-era beige interior was pitched along with the front bench, which would soon be replaced by a pair of Chevelle buckets that also made room for a custom center console. Every nut, bolt, screw, and trim tab that was on the car when it left the factory, came off.

With the front clip removed and the main body stripped down, a thorough cleaning and blasting was done, taking the car down to bare metal. Once back in Jeff’s shop, all the areas needing rust repair were marked, and Nat Ramirez and his body crew quickly got to work. The driprails, in need of repair, were simply shaved off to clean up the wagon’s lines. The rest of the body was painstakingly repaired using all custom-fabricated parts and metalwork done by Jeff and his guys. The only exception was the cowl hood, which is an aftermarket reproduction.

While the body was receiving treatment, the frame was blasted clean and resealed. Once done, new suspension parts from Global West were hung up front, including 2-inch drop spindles. Binders are factory GM single-piston monsters clamping down on 12-inch factory rotors. Out back, the factory rear was pitched in favor of a Currie 9-inch unit with disc brakes on the end and 3.55 gears with a limited-slip in the center chunk.

With the body and frame ready, they were reunited so the dry building process could begin. With a fuel-injected Chevrolet Performance Ram Jet 502 destined to go up front, the factory gas tank was modified to accept a fourth-gen Camaro in-tank fuel pump assembly, along with some extra baffling welded in to keep the fuel-injection pump immersed even under hard cornering and launches.

Inside, a custom center console was made up to fit the Richmond six-speed going behind the 502, house an oil pressure gauge, and speakers for the new sound system. Because the car’s owner wanted a fold-down third-row seat installed (optional in ’71, just not installed on this particular car), a custom subwoofer box was built to fit between the second- and third-row seats.

With SS buckets and a Chevelle gauge cluster going in up front, SS-style door panels were made for all four doors. Headrests to match the front buckets were fabbed up for the second-row bench, and a salvage yard third-row seat was totally refurbished and covered in the same black material the rest of the seats were covered in after new foam was installed.

After over two years of work, the car was sprayed in a custom mix of BASF Flyin Purple basecoat then covered with clear to protect it from the sun. Everything was reassembled, and the Purple People Eater, as the guys had dubbed it, hit the streets once again. The ecstatic customer couldn’t have been more pleased, and on sunny New York days enjoys hauling his family around in the cruiser, and lighting up the tires whenever he pleases thanks to the 502’s healthy amount of torque.