Check Out this 1963 V-8-Powered Nova Sleeper

Two With A Twist: The improbable story of a V-8–powered Chevy II 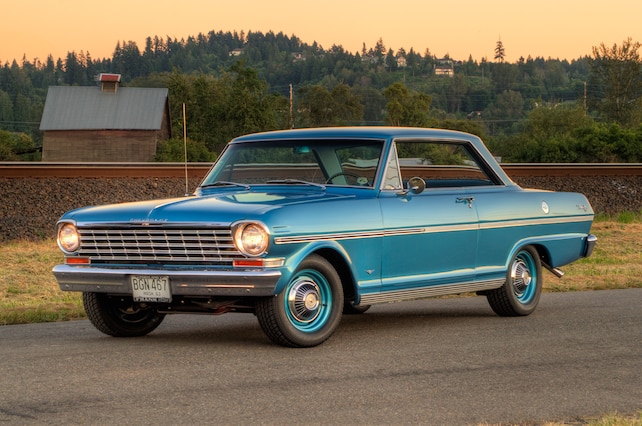 Just because GM didn’t offer a Chevy II with a V-8 before 1964 didn’t mean you couldn’t buy one brand new. Soon after the car debuted in 1962, GM started producing the parts necessary to make the non-ordained marriage possible. That the conversion more than doubled the price of the car itself means dealer-converted models were exceedingly rare even when new.

Charles Pinchak’s V-8–powered 1963 is all about rarity but it has nothing to do with the L79 wedged between its spring towers. The particular series of 327 he swapped didn’t exist until 1966 so that makes the car inauthentic, which Charles willingly admits … if asked, of course. But his Nova is far rarer than one of those documented dealer-swap cars—in fact, you could call it one of one. “It’s my first car,” he revealed.

It’s also likely more storied than any of those real examples. That Charles even got a Nova is a story in itself. He asked his grandfather, a mechanic of 40-plus years, to go car shopping with him. “He said he’d find me a nice Mustang,” Charles said.

That his grandfather turned those wrenches for Ford didn’t seem to matter before Charles explained that he rather wanted a Nova like his friend’s ’64. “His response, ‘Who in their right mind would buy a Chevrolet?’” he recalled.

They say the greatest gift one can give is unconditional love, which is what Charles’ grandfather offered the day this particular Nova turned up. “My grandfather looks it over and shakes his head and finally says OK,” Charles remembered. In retrospect, to do otherwise would’ve been foolish. Exceptional for its age, it had 93,000 miles. Exceptional for the wet side of the Pacific Northwest, it had no rust to speak of. Exceptional for anywhere in 1986 for such a solid car, the sellers were asking $900. As he was three months away from his driver’s license, his grandfather swallowed his pride and drove the Nova home for him.

Naturally, Charles accumulated stories along the way. His fondest, he admitted, began in 1995, the year he disassembled the car to restore it. What makes the chapter so special was that his grandfather, the career Fordophile who begrudgingly consented to shop for a Chevrolet, helped.

As the photos suggest, this was more than a restoration. For the five years that followed, Charles tracked down and bought all the correct parts the factory deemed necessary to convert a Nova to V-8 power. Though he swapped it out for the L79 that’s in the car now, Charles first built the car around a raised-filter 283 block, a dealer replacement engine date-coded for the period the car would’ve been converted had it really been an official V-8 swap.

The engine that replaced the 283 started as a genuine 1966 L79 327. Jack’s Custom Machine Shop in Tacoma built it to the 11:1 spec, including the correct 3863151 camshaft, in fact the first hydraulic performance grind available for Chevrolet.

Externally, the engine reflects L79 practice, from the 461-series heads to the plated stylized rocker covers bolted to them. Between those heads is the alloy Winters 3890490 manifold and the Holley 585-cfm 4150-C carburetor, both appropriate for the 350hp L79. To his credit, Charles pursued parts with a vengeance, as the seemingly insignificant vacuum-advance line indicates. “That was a lot harder than you’d think to find,” Charles admitted.

Technically, the Muncie M22 was available as early as 1965 in Corvettes but Charles outright admits the one in his is the improved version that Auto Gear Equipment offers in a lighter, yet thicker aluminum case. The shifter that attaches to it, however, is a genuine Muncie piece. Beyond the transmission is a stock driveshaft and a 1955-’64 gear case. Though he praises the Eaton limited-slip gear carrier, he admits that the combination of 3.73:1 gears and 24-inch-tall tires makes the car not-so-freeway friendly.

The Nova-only manifolds are correct for the application but the 2 1/2-inch pipes and Flowmaster mufflers aren’t. The car sits proud but it performs better thanks to KYB GR2 dampers. As Nova brakes were marginal with even four-pot power, Charles improved the system with front discs and a vacuum-assisted dual-circuit master cylinder. Discs required 14-inch wheels, so to improve the car’s traction without affecting the tire’s overall diameter he shod them with lower-profile 215/60-14 radials.

If the car’s conversion sounds painstaking, consider its reconstruction. Charles and his granddad completely disassembled the car and stripped it to bare metal. Charles tuned the panel gaps as he reassembled the body. To ensure the color’s consistency, Dan Anderson applied the basecoat of PPG Concept-series Nassau Blue Poly to the completely assembled shell. To ensure the consistency of the surface, he applied the clear only after Charles once again disassembled the car. Knowing that process, it’s no surprise that the paint chapter alone consumed nearly two years. And as the detail shots indicate, the labor was worth it.

Also worth the labor was Charles’ unrelenting search for trim. What wasn’t perfect was replaced almost exclusively with N.O.S. parts. What wasn’t available in old stock was restored either by plating or anodizing by Gordon Custom Car Care in Ruston, Washington.

Though not necessary to the swap, the simulated walnut steering wheel imparts a certain air of authenticity to the job. More than authentic, the Super Sport gauge cluster is N.O.S., a real rarity as the markings on the Sun-supplied tachometer mark it as unique to V-8 applications. And to set another record straight, yes the speedometer is in miles per hour. “This is not an export speedometer,” Charles assured us. “This is an original GM piece.”

The remainder of the interior, from the CARS Inc.-reproduced covers installed by Wayne Knutsen and the re-webbed Fisher safety belts, reflect the way the car was when new. In fact, the only thing out of place is the Custom Autosound USA-6 head unit and dual-cone drivers in the dash and Boston Acoustic 6x9s in the package tray.

Charles and his grandfather concluded the car’s painstaking restoration and its by-the-book conversion to V-8 power in a scant five years; however, their work went largely unrecognized for nearly twice as long. In fact, it wasn’t until 2009—nine years after its completion—that Charles’ V-8-powered Deuce won the Chevy Muscle Pick at the Goodguys Pacific Northwest Nationals. “That was top notch,” he mused. “My grandfather had passed away in June 2009 and after all those years of working on the Nova together, we got it right!”