This is One Killer 1970 Camaro Street Machine 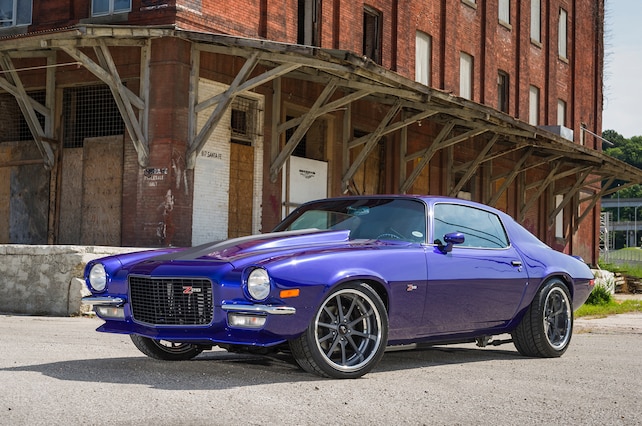 Rick Villers hasn’t always been a street-car aficionado, and maybe he still is not, maybe he’ll always be an “off-road” aficionado. On the outset he had a distinct appreciation for what a select combination of parts and a firm tune-up exploited by driver skill in an off-road setting could produce. He raced Midgets and Sprint Cars “until age stopped it.” Then he thought he’d try the dragstrip. He did and found it mushy, too boring, too short of a ride. It did not excite him.

“The car I have now was too nice for abuse. I didn’t have the heart to cut it up. So here we are: old guy with a cool street machine. The car’s been built twice and so now it has a second chance.” But that construction wasn’t always so dear or detailed. It was a real freakin’ mess that a friend of his found up in Iowa. That was a long time ago, in 2004. He gave just $400 for it and dragged the Z28 back to Missouri. Short story: Villers lauds the Restomod Store in Independence, Missouri, and craftsman Michael Mclin for making it righteous.

Rick’s been whirling in the car spectrum long enough to decide that there were already too many first-gen Camaros on the planet and he wanted to make no further contribution to that genre. He wanted to be different, so he was. Though the hapless 1970 F-body was just a roller, having neither engine nor transmission, he happily closed his hands around it.

When he opened them again, he released the Camaro for a 2-year sabbatical. Villers works as a contractor for a large company that builds things out of concrete, a stable footing if there ever was, so he didn’t hesitate in setting up the chassis in a like manner. Nothing out of the ordinary, but something all-encompassing nonetheless. While the bones were cleaned and treated, they weren’t strengthened in any way. While Rick’s charge could pass for a clean Pro Touring example, it really isn’t. With modest section-width tires and a six-speed overdrive transmission as a travelling companion, the vibe is more likely Street Machine.

The front mechanicals are not unusual: Hotchkis spindles, tubular control arms, and antisway bar work with Competition Engineering adjustable coilover dampers. A Hotchkis rack-and-pinion steering unit is in the middle of it all. At the rear, body movement is checked by Hotchkis leaves, Comp Engineering adjustable dampers, and Slide-A-Link traction bars. The venerable 12-bolt axle is buttressed with Moser 31-spline axles and a Posi-Traction differential carrying 4.11:1 gears. To burn off excess energy, there’s a Brembo 13-inch plate and four-piston caliper at each corner. Now, the Camaro was still a roller but one with a new dimension.

Where most would consider a darling LS variant under the hood, Rick stayed true to the old ways; he gave it a small-block (but were he to do it over again, he says he would go for the LS). The 1973 iron cylinder case touts a forged rotating assembly that yields 406 cubic inches. Rick Hunter at Day Automotive in Independence, Missouri, prepared it with Brodix Track 1 cylinder heads and as a nod to the old-school, he topped it with twin four-barrels on an Edelbrock intake manifold. The upshot is 535 horsepower and 487 lb-ft of grunt down on the pavement. As a complement, Villers specified a roadworthy Turbo 350 transmission, but one with a Gear Vendors planetary gearbox behind it.

Around about now, ace metalworker and paint-booth terror Michael Mclin was prepping the envelope and handforming the front spoiler. Mclin was aiming for a clear ground to showcase the PPG Super Sonic Blue. (Villers confided: “Choosing the color was my biggest concern. I’ve since discovered that women are very attracted to it.”) Mclin poured on the purple and then laid down some broad custom charcoal stripes to finish the treatment. Meanwhile, others at the Restomod Store got moving. They replaced the OE headlights with Restomod pieces and the taillights with Fesler lenses. Resto further accessorized the body with front and rear bumpers and sideview mirrors of their own manufacture.

And when Rick is in the room, his butt’s on a Procar seat covered in leather and he’s held fast by a Simpson five-point harness. Restomod removed the minimal rear seat and extended the wool loop carpeting to cover the socket. From bits of carbon fiber and leather they crafted custom door panels. So Rick pushes the ignition switch and puts his dogs on the Clayton Machine pedals. He checks out the Auto Meter Ultra-Lite dials in the Covan dash insert. He racks the B&M shifter, builds on the converter, and gets ready to eat the horizon. On the way there, he might even open up the Alpine audio.

Rick seems to have slipped seamlessly from one world to another, one where people can peruse his Camaro at leisure and he can stand back and luxuriate. “We have won almost all the shows we’ve entered. The last one was at Starbird-Devlin.” Whatever the case, it appears that Mr. Villers has finally found his warm spot.