This 8-Second 1969 Nova is a Fierce Track Competitor

A Watchful Eye: You can learn a lot by growing up in a high-performance household 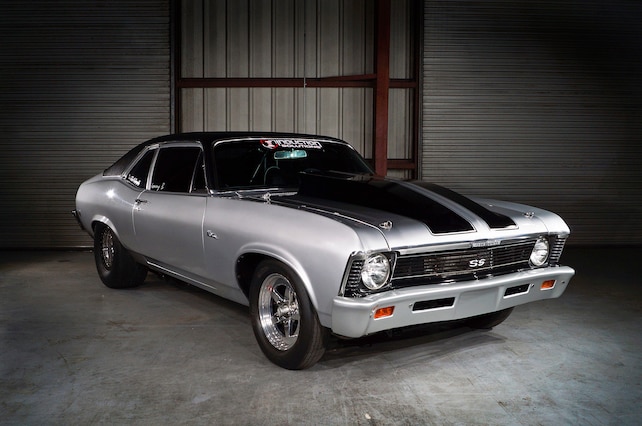 If you have a deep passion for something there’s a good chance that one or both of your parents has or had that same passion. Seeing their dedication can be inspiring, and it can also lead to a shared bond that grows stronger as time goes on. For Brooksville, Florida’s Jon Bitler, it was his father who put a carburetor in front of little, 4-year-old Jon to tinker with.

As Jon figured out how to take a carburetor apart at an early age, it wasn’t but a couple of years later that he was watching his dad, Don Bitler, assemble the 396ci big-block Chevy for his 1968 Nova. Seeing his dad have such passion for working on the family hot rod and race it at the track led to the inevitable: Jon wanted a car of his own.

No, he didn’t buy his own at the age of 8—not that this story couldn’t have gone that way—but Jon purchased his first ride much like the rest of us. Having just entered his teenage years, Jon got himself a summer job, saved up, and with a little help from his dad, he went out and bought his first car.

Of course, it was a Nova, though Jon’s is a ’69 model that was a hot street machine in its own right. The Silver Bullet, as it became known, was shod with Weld Draglite wheels, 4.10 gears in a beefy 9-inch rearend, and stock suspension with a pair of slapper bars. The tired 360ci small-block backed by a TH350 could only muster a 13.06 at 105 mph with Jon smacking the sloppy ratchet shifter for all it was worth.

Jon worked through high school and saved his pennies to afford an eventual restoration of the Nova. The renovation required new quarter-panels, rocker panels, doors, trunk pan, roof, fenders, hood, front bumper, and a rear taillight panel. Surprisingly, there was budget left over for a hotter engine combination—the 360 was chucked in favor of 406 cubic inches of Vortec-headed, solid-flat-tapped American muscle. The short-block was filled with a steel crank, forged H-beam rods, and forged JE pistons. It had to hold up to the 150-shot of nitrous that was frosting the intake charge beneath the 830-cfm Holley carburetor that Jon customized himself.

From the Jaz racing seat vantage point, Jon saw his budget-minded build put up 6.30-second eighth-mile times. And budget-minded it was—Jon only dropped $3,800 on his drivetrain upgrades. Also in the planning was a new, crisp-shifting B&M Z-Gate shifter, a 2,800-stall converter, and suspension mods in the form of 90/10 front shocks, 50/50 rear shocks, and Moroso trick springs.

After competing in a local 6.50 index class Jon realized how competitive he could be so he opted to move into another local class: Real Street.

The 406 drivetrain combo was sold to help finance the much pricier Real Street build—it was time to step up to 555 cubic inches of badass big-block Chevy. Scotty’s Racing Engines machined the Dart Big M block and Jon assembled it with an 0.800-inch lift PKRE camshaft and Edelbrock Victor heads. With the 555’s 14:1 compression ratio crackling from the 4-inch-diameter Flowmaster mufflers, Jon was now playing in a different league. The stock suspension was ditched in favor of Calvert Racing split mono-leaf rear springs, which were relocated to make room for 315/60R15 drag radials out back.

Even with the limited nitrous jet size, Jon’s nitrous oxide system was still adding 200 horsepower to the beastly powerplant. This enabled the Nova to stop the clocks in 5.37 seconds at 128 mph. That performance in the eighth-mile was closer to Jon’s goal.

After doing a bit of racing with this new combination, a job change had Jon put the Nova on the back burner. Not that he wasn’t making enough money to race, but he traded his dealership daily grind for a job with a well-known carburetor company, and spent a lot of time learning the product line and gathering data to continually develop the product line for improved performance. He used the Silver Bullet for development work during this time and decided he needed to go 4.80-4.90s in the eighth-mile, and 7.80-7.90s in the quarter so he could run the latest local X275 class.

“What the hell, let’s make it a 565,” Jon said. A mild rebuild was in order. The old 9-inch was swapped out for a Chassisworks Fab9 rearend, a stout BTE Powerglide transmission replaced the previous TH400 upgrade, and a weight-saving tubular front suspension from Performance Design Products dropped curb weight to a relatively svelte 3,450 pounds with driver.

While all of this was going on, Jon found himself at a new job with Steve Johnson bringing him into the Induction Solutions fold.

During his miniscule amount of free time he’s been putting his carburetor, nitrous, and chassis experience to good use by helping other racers fine-tune their combinations through his IRD Racing venture.

Jon’s quest has been to get the Nova into the 7s, and while recent progress has seen him nearly achieve that, he has been taking a look at possibly competing in the NMCA’s Edelbrock Xtreme Street class.

Once upon a time, it was a young Jon who watched as his father built his own engine and raced his own car. Now, it’s dad who keeps a watchful eye on Jon as he takes another Bitler Nova to the next level of performance.