History of the ZL1 Camaro

A brief history of ultimate performance 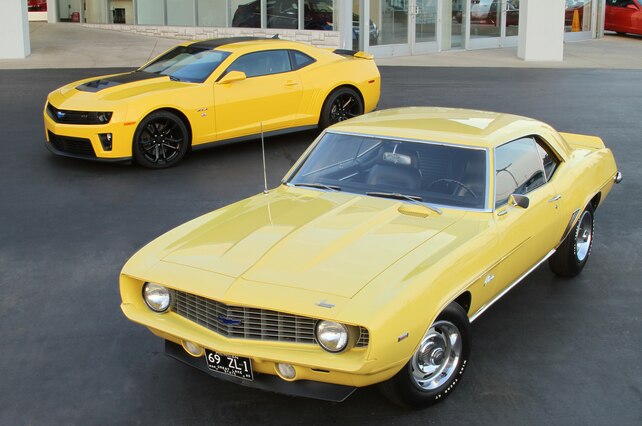 Few automotive legends live up to their mythology. The Camaro ZL1 is one that does. Conceived as a lightweight racing engine for the Can-Am road racing series (Group 7), the original 427-cubic-inch ZL1 engine was never intended for production vehicles. But Chevrolet’s motorsports engineers never counted on an enterprising and forward-thinking Illinois dealer named Fred Gibb. He used Chevrolet’s COPO (Central Office Production Order) special-order system to produce the legendary Camaro ZL1.

Nearly half a century later, the alphanumeric moniker ZL1 is synonymous with ultimate-performance Camaros. The recent introduction of the sixth-gen ZL1 takes performance to its highest plateau with a supercharged engine estimated at 640 horsepower and a suite of driver control technologies that make it a triple-threat modern muscle car: adept on the street, dragstrip, and road course.

It all started with Gibb’s COPO order #9560. He wasn’t the first dealer to leverage the COPO system—typically used for special-order paint packages for fleet trucks—to create performance models not offered through regular production. The famous 1969 Yenko Camaros were COPO cars, but used production-based Corvette 427 engines. Gibb’s idea was to stuff the all-aluminum ZL1 427, which weighed over 100 pounds less than an iron big-block, to give the Camaro a weight-balance advantage on the dragstrip. He intended the cars for Super Stock competition.

Chevrolet didn’t simply rubber-stamp Gibb’s request. It took plenty of convincing and some cajoling from Vince Piggins, who was responsible for the Camaro Z/28, to get the project approved. Here’s the catch, at least 50 ZL1s had to be built to make them competition legal—and they weren’t cheap. The engine upgrade essentially doubled the price of the car, meaning only hard-core racers and enthusiasts would likely cut a check for one. Gibb ordered the 50 cars but knew he’d have a hard time selling them all, eventually sending 37 back to Chevrolet. They were redistributed to other dealers while additional dealers got wind of the unique performance Camaro and ordered their own. When the dust settled, 69 Camaro ZL1s were built in 1969.

It was true the cars were tough to move off the showroom floor. Berger Chevrolet in Grand Rapids, Michigan, had a yellow one that took more than a year and a significant discount to finally sell. Nevertheless, the Camaro ZL1s became legends in their own time. Chevrolet recognized that and even used the engine and ZL1 name on a couple of second-generation show cars.

The ZL1’s mythology grew with the collector market for Detroit muscle cars. Its rarity and unquestionable performance credentials have made it one of the bluest of blue-chip factory supercars. Chevrolet revived the ZL1 name in 2012 as a new high-performance variant of the fifth-generation Camaro. It was technically the first regular-production ZL1 ever and set new benchmarks for performance thanks to its supercharged LSA engine. The new sixth-gen model ups the ante with more power and a lighter-weight architecture, offering capability on par or exceeding the world’s highest-performing sports coupes.

The Camaro ZL1 has come a long way from its origins as a special-order dragstrip sledgehammer, and Chevrolet has done a masterful job cultivating its legacy, with performance and a driving experience that lives up to its truly epic mythology.

An early ZL1 parts assembly shows its unique parts, including the aluminum block and heads. Compression was a stout 12.0:1, and the mechanical flat-tappet camshaft delivered gross lift of 0.580 inch on the intake side and 0.620 inch for the exhaust valves, with 1.7:1 ratio rockers. The aluminum, open-plenum high-rise intake was essentially the same as used on the L88 427 big-block and was used with a Holley 850-cfm double-pumper carburetor.

The ZL1’s aluminum cylinder block—with four-bolt main caps—was based on the iron big-block but featured thicker bulkheads for strength and cast-iron cylinder sleeves. Some of the boltholes and stud threads were longer, too, for greater clamping strength. Screw-in galley/freeze plugs were also incorporated.

The mark of a true ZL1 block is the Winters foundry “snowflake” casting logo on the front of the block.

The production-spec ZL1 engine wore heads based on the open-chamber L88 castings but with slightly larger exhaust ports that drove the higher, 0.620-inch exhaust-side lift on the camshaft. The cast-iron exhaust manifolds choked down output a bit and it was officially rated at 430 horsepower and 450 lb-ft of torque, but real-world output was more like 525-550 horsepower. A more streetable version of the engine with lower compression and a milder cam was proposed by Vince Piggins but didn’t see production.

This is Camaro ZL1 Number One. It arrived, along with car Number Two, on December 31, 1968. It didn’t have a choke so it wouldn’t start in the cold Midwest winter air, but was pulled off the car hauler and immediately sent to Dick Harrell’s shop in Kansas City, Missouri, where it was prepped for the 1969 AHRA Winter Nationals. It ran 10.41 in Super Stock guise and later converted to AHRA Pro Stock specs in 1971. Former GM engineer Bill Porterfield purchased the car in 1980s and restored it. It has changed hands a couple of times over the past decade. In 2012, it sold for $400,000.

Adding the ZL1 engine to the Camaro also added to the sticker price—padding it by nearly $4,200. That pushed the bottom line up to more than $7,000, which was more than an L88-powered Corvette. Not surprisingly, they didn’t fly off showroom floors. This one was ordered and eventually sold by Berger Chevrolet, in western Michigan. It sat on their showroom for more than a year. It remains in remarkably well-preserved condition.

Under the direction of styling chief Bill Mitchell, Chevrolet built an early second-generation Camaro ZL1 that served as an evolving design study. This iteration, which wears 1971 license plates, shows molded front and rear lower fender spats, along with a hood bulge, hood tach, and European-style foglamps, which were a favorite cue of Mitchell. The foglamps and molded fender enhancements were added after the car was initially shown.

A rear view of the second-gen ZL1 styling car shows more of the molded fender spats, which evolved into a Firebird Trans Am cue. And while it’s hard to see in the shadow in this image, there’s a badge on the taillamp panel that matches the grille badge seen in the previous photo. It shows the American and Canadian flags, along with the words CAN-AM ZL-1. Can-Am, of course, was the racing series for which the engine was originally developed.

In 1977, another ZL1-badged Camaro made the rounds on the auto show circuit and with the automotive media. It was the “Can-Am ZL-1” styling car heavily modified, including an updated roof with the later wraparound rear glass. It retains the earlier iteration’s molded fenders, but also clearly wears a unique front fascia that hinted at the Camaro’s styling update for 1978. The hood also had the same bulge as the earlier iteration, but a pair of molded-in pods supplanted the previous, singular hood tach. The hood also wore the dual-flags/CAN-AM ZL-1 badge seen on the earlier edition. One more thing: The car—repainted a very 1970s deep crimson with gold stripes—wore Berlinetta badges on the sail panels a couple years before that model replaced the Type LT in the lineup.

The ZL1 name reemerged on a fourth-generation Camaro concept built by Chevrolet’s “toy box” chief Jon Moss—the man responsible for the Impala SS concept that was so popular the car was pushed into production. In this case, the fourth-gen car was born as a 1994 model and had its exterior updated around 1999. Like the original Camaro ZL1, it featured an all-aluminum big-block, but it displaced 572 cubic inches and used a Donovan aluminum block. It originally was equipped with a pair of side-by-side intake plenums and throttle bodies but was later changed to a single throttle body-type EFI system.

Chevrolet Performance rekindled the ZL1 spirit a few years ago with the introduction of the Anniversary 427 crate engine, which was built very closely to the original ZL1’s specs, but with a more contemporary camshaft and valvetrain. The aluminum block was cast from the original ZL1’s tooling. In the early 2000s, Chevrolet Performance—back when it was known as GM Performance Parts—also offered a “Ram Jet ZL1” crate engine that used the tunnel ram-style intake plenum and the engine actually displaced 454 cubic inches. The Anniversary 427 is no longer listed in Chevrolet Performance’s catalog, but brand-new examples are still available from some retailers. Only 427 examples were built.

Power for the fifth-gen Camaro ZL1 came from the supercharged LSA 6.2L engine that was also used in the Cadillac CTS-V. The Camaro version carried some unique features, including specific plumbing for the heat exchanger mounted above the supercharger. It also used unique exhaust manifolds, accessory drive system, and an idler pulley in place of the conventional power steering pump, thanks to its exclusive electric power steering system. It was rated at 580 horsepower.

By the way, we’ve mostly used “ZL1” throughout this story for the sake of consistency, but the early engines were officially slugged “ZL-1,” with a hyphen. Chevrolet dropped the hyphen with the car’s reintroduction in 2012.

The sixth-gen Camaro ZL1 promises to set a new threshold for factory performance, with a significantly greater power-to-weight ratio—about 60 more hp in a package that weighs about 200 pounds less than the fifth-gen ZL1. It also offers an all-new 10-speed automatic transmission and more driver-control technologies. It goes on sale in late 2016.

A version of the Corvette Z06’s supercharged LT4 engine powers the sixth-gen ZL1. Only a handful of production-related differences distinguish it for the Camaro application, and it is rated at an estim9 ated 640 hp and 640 lb-ft of torque. Its 1.7L Eaton TVS blower is a little smaller than the LSA’s, but spins faster—up to 20,000 rpm—to help make power across a broader rpm range.

Complementing the sixth-gen ZL1’s powertrain is a chassis system design for curves and the dragstrip. It all meets the tarmac through 20-inch wheels shod with Goodyear Eagle F1 Supercar tires with a compound developed exclusively for the car. Behind the wheels are massive Brembo brakes, including six-piston monobloc front calipers and 15.35-inch two-piece rotors. In short, everything on the car is designed for one thing: going fast.