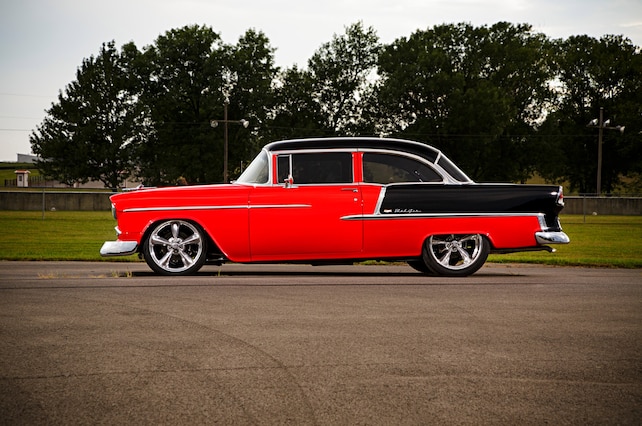 What do you get when you combine two family generations, nearly four decades, and a 60-year-old car? Among other things, clearly priceless memories and—ultimately—one priceless ’55 Bel Air.

Alabamian Jason Grimes had the distinct pleasure of growing up in an automotive-fueled family atmosphere. As a kid, like many of us in our so-called midlife years, he built plastic scale models as his father wrenched on vehicles, both as a profession and a hobby. “My dad always had a shop and he was always working on or modifying cars and trucks … he taught me a lot,” Jason recalled. But that influence extended beyond his immediate family, as well.

“I can remember riding in the [Bel Air] with my uncle when I was a kid. Back then, it had a four-speed Muncie in it. He would let me shift the gears for him when he took me out from time to time. He used to drive the car back and forth to work for years, but then he ended up with a new car so he decided to paint the ’55 and put it away. The car sat for 13 years before he finally sold it to me for $2,000 … that was a lot of money back then (1990). Since that time I have owned the ’55 for 25 years—20 of that it sat in my dad’s garage. I could have easily sold it at least 50 times but I always held on to it with big hopes of building it to the car it is today.”

So, above and beyond that brief personal synopsis of the Bel Air’s family history, just exactly how did the Grimes’ ’55 come to be the “car it is today”? Well, along with the help of his ultra-influential father, Jason also enlisted the ultra-talented Brad Cline and his shop, Thunder Valley Customs, in White, Georgia, to bring the ’55 to where it’s at today.

Morrison set the chassis up to accept Jason’s mill of a choice: a 620-horse 572 big-block direct from Chevrolet Performance, with a Holley carb, MSD ignition, and a set of Rewarder headers were added for obvious reasons. Behind the potent V-8 is a six-speed Magnum XL (same as the brute Magnum, just with a single shifter location rather than multiple). With the 4.11 gearset, the six-speed’s 0.50-OD ought to give Jason’s ’55 plenty of leg on the open highway, while still retaining the off-the-line muscle it so deserves.

Exterior-wise, though stock-ish in most respects, the Chevy is of concours-level quality … nice as they come, door handles, trim, and all. The paint is PPG Viper Red and black, applied by Thunder Valley. The interior, however, was put together by Wilson’s Upholstery in nearby Rockmart, Georgia. The all-black pleated leather ensemble is complemented with black cut pile carpet, Flaming River steering wheel, Hurst shifter with “modern” vintage (six-gear) shift knob, restored gauge pod, and Vintage Air A/C unit with custom-mounted control panel.

When asked about the project as a whole, Justin says he regrets “absolutely nothing … just that I didn’t build it sooner! And the best part about it was the first night we got the car running and me and my dad took it down the road about two miles … I was in heaven.”

This sweet 1955 Chevrolet 210 packs an LS3 engine and an Art Morrison suspension system for one killer ride.

A 1955 Chevy gasser that’s build to be driven. And even though it looks like a track-only car it’s built using modern materials and technologies so that it’s fun to cruise and easy to maintain.

If you like custom Tri-Fives then you’ll love this subtle yet stunning 1955 Chevy 210 coupe. At first glance it looks stock, but from the 1 1/4-inch chop to the shaved bits there a ton of changes that makes this one of the cleanest we’ve seen.

» Read More
This 1,300hp Beast is Not Your Father’s Shoebox

No video games to be found here, just two tons of steel, aluminum, and horsepower. It's Not Your Father’s Shoebox.

Craig Crawford went with a tried and true old-school recipe when he built this 1955 Chevy 210 complete with a big-block and 15-inch American Torq Thrust II wheels.

After watching his car sit in the garage for years, Greg Land hatched a plan to bring his 1955 Chevy 210 hardtop back to life with a host of custom touches.