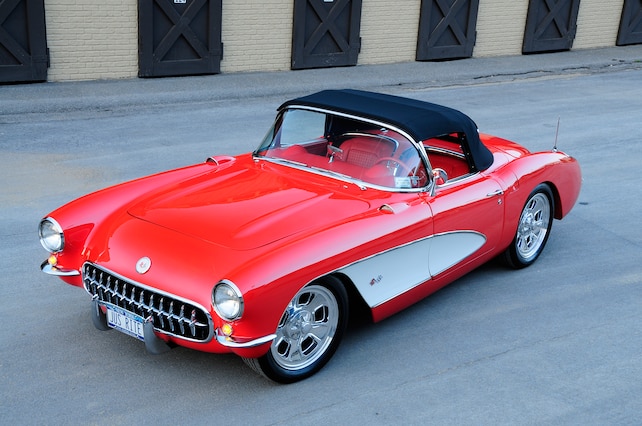 There are deals to be found every day in the automotive world if you take the time to allow for just the right prospect to make itself known. Regardless if you are trying to find vintage parts, a deal on wheels and tires or even a complete project vehicle there are plenty of opportunities out there if you’re willing to scour the Internet. Dave and Sue Ciappa of Lockport, New York, are no strangers to hot rods and custom cars as the pair have completed an endless stream of builds over the years, having owned or raced over 30 Corvettes spanning years from 1953 to 2013.

A few years ago they came across an ad for a 1957 Corvette project car listed online and decided to see if they might be able to swap their 1966 big-block coupe project in the deal. The plan was to meet the sellers, with each of them trailering their personal cars, at a designated area and see if the deal would be viable. Each seller scrutinized the other’s car and a trade was made with each party leaving with a new build in tow. Let’s not get too far ahead of ourselves as there’s plenty to know about what led to Dave getting involved hard-core in the Corvette scene.

Growing up, Dave was fascinated by everything automotive and by the time he was 16 he would regularly borrow his dad’s 1957 Plymouth for secret trips off to Niagara Raceway Park to run the car down the quarter-mile. This hunger for performance eventually led to a 20-year career in drag racing, starting in the early ’60s where he campaigned his first Corvette: a 1966 model in the E/SP class. As the years passed he would move up in classes and speed thanks to his razor-sharp reflexes to where he would field a B/Econo dragster that ran in the 7s at over 170 mph. Once he was done with racing, he moved on to building hot rods and customs full-time with Sue.

With the newly acquired project back at their home shop the pair took time to review the car and get an idea of the path it should follow. Since it was non–numbers-matching the opportunity to take a refreshing approach with the build was calling. Dave looked to his past as a drag racer and wanted to blend the car’s classic styling with that of his time spent as a racer fused with cutting-edge technology for the ultimate in handling. To get started he made a call to Progressive Automotive of Baltimore, Ohio, for one of their chassis featuring their new boxed framerails constructed from 10-gauge sheet steel. The new frame follows the original contours, width and shape for a perfect fit, and also features a tubular crossmember for added strength. In back, a rebuilt original 1957 rearend was packed with 3.36:1 gears and hung in place by Progressive’s triangulated four-bar suspension combined with Aldan American coilover shocks and heavy-duty sway bar. Up front is all business with Progressive’s exclusive IFS featuring their very own tubular upper and lower control arms deftly matched to Heidts 2-inch drop spindles, Aldan American adjustable coilover shocks and heavy-duty sway bar. When you need to cut the speed, a CPP dual master pushes fluid through stainless lines to 11-inch drilled and vented discs with four-piston calipers from ECI anchored at each corner. To dial in a perfect stance, a set of 18x7 Billet Specialties Legacy wheels capped with BFGoodrich rubber seals the deal.

Seeing the engine included with the car was barely clinging to life, Dave opted to freshen it up with a speed shop full of go-fast goods. The 1971 400ci block was massaged to 406 ci and filled with a forged steel crank linked to Chevy rods and topped with a set of TRW forged aluminum pistons. For plenty of thump, a stick from COMP Cams sets the beat while plenty of power comes from a pair of World Products Sportsman II cast-iron cylinder heads. Up top, an Edelbrock dual-quad intake wears a pair of matching 500-cfm carbs that spark to life through an upgraded Hypertech HEI ignition. Spent gasses dump through a set of ram’s-horn manifolds to a custom-fabricated 2 1/2-inch stainless exhaust with stainless bullet-style mufflers for a mellow tone. To move the goods, a warmed-over Hughes Performance Powerglide trans meets a custom driveshaft to complete the package.

If you’re going through the trouble of building a top-notch roller, the rest of the car had better be equally impressive. To bring the weathered body back to life the pair enlisted Brian Volker of 5-Star Collision in Medina, New York, to work his magic. Volker prepped the body and went to work painstakingly preparing it for paint as well as setting all the gaps and making it all perfectly straight. When everything was blocked to concours standards, he loaded his spray gun with PPG Venetian Red and laid down a decadent coating to bring it all to life. He then followed by adding the finishing touch, classic ivory gloss to the coves. Once the paint was dry, Dave got busy on the reassembly process utilizing fresh brightwork from Corvette Central and Trim Parts, Inc. A black Haartz convertible top from Coffman Corvette adds plenty of allure to the exterior.

Focusing on the final details of the interior, Dave wanted to retain the classic good looks designed by the factory with a few personal touches. The stock dash was retained and once again filled with stock gauges that were painstakingly restored by Dave, who also rewired the car. For added comfort, the steering column was moved forward 3 inches while a custom Lokar shifter was added to pull the gears. To complete the interior, Wise Guys of Elkhart, Indiana, supplied the custom 3-inch lowered vivid-red seats with factory-style material while the door and related panels are by Al Knoch Interiors and carpeting is by Corvette Central with custom updates by Rose Spitzer. This is one fine 1957 Corvette with loads of style and plenty of performance and handling infused into one bitchin package putting down plenty of miles across New York.