Mission Critical: Redline is set to blast off with its twin-turbo, 427ci Sixth-gen 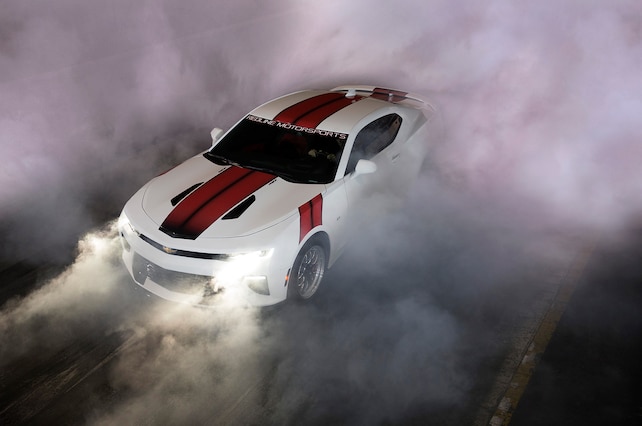 Perhaps the toughest thing to do as a business owner is to look past the money coming in today and figure out how you are going to sustain yourself over the next 5 or 10 years. And, of course, you have to do that while still keeping the lights on. Every time I speak with Howard Tanner of Redline Motorsports, he is in the midst of this juggling act. For the past year, his sights have been set on the sixth-generation Camaro. His order for a 2016 Camaro SS was placed in the summer of 2015 (September, officially), and it was just a matter of playing the waiting game (not one of Tanner's strengths). In the interim of course, he's been sharpening his knives on some boosted C7 Corvettes.

"We knew from the minute they were ready to release the GEN 6 that we were going to develop a twin-turbo system and stuff a 427 in it. We actually had the block out to Steve at RED [Race Engine Development] six weeks before the car was built to get the sleeves installed. It looked like Christmas at the shop as we had a pile of parts for both the engine and the turbo system." On November 12, 2015, Howard took delivery of his 2016 Camaro SS, equipped with an 8-speed automatic, from Jon Hall Chevrolet in Daytona Beach, Florida. He put a scant 25-50 miles on it before going to the track. With every intention to modify it he wasn't too concerned with a solid baseline, but figured why not. After running a handful of 12.40s at over 113 mph, he headed home to pull the exhaust off and start fabrication.

Howard mapped out a plan with fabricator Roy Balseiro to mount a pair of Comp 66/71 turbos low in the exhaust path. The stock exhaust manifolds were retained as a reliable tool for spooling the turbos. Meanwhile, the section of exhaust from the manifolds back (including the cats) was removed. This would be the new home for the Comp turbos. "Mounting the turbos low on the bottom is the right place to be. It is 6-10 inches away from the exhaust port. And there wasn't a lot of room under the hood anyway, which would turn into a heat sink." The Comp turbos are oil-less, which means they don't require tapping the oil pan or using a scavenge pump. It also means they can be oriented however the builder chooses, which has some real packaging advantages. These turbos are water-cooled, however, so some consideration needs to be taken for plumbing. Redline tapped coolant from the sides of the block. Upstream of the turbines (on the fabricated 2.5-inch stainless steel piping), Redline mounted a pair of TiAL 44 wastegates and routed all exhaust into 3-inch tubing where it mates to the factory NPP dual-mode exhaust. On the compressor side, Wiggins clamps are used for reliability going into and out of a 6-inch-thick air-to-air intercooler, which will support 1,400 hp.

"This is a bigger version of what we plan to offer to customers. Since it was for the shop car, we pulled all the gloves off. We are going to be working with SEMA on a certified, CARB legal version with cats." Howard added that the lower horsepower kits would be able to upgrade to the bigger intercooler and turbos easily since the kit is modular.

Though the turbos were oversized for the stock engine, Redline decided to dyno tune and track test the setup as-is before moving forward with the build. The stock LT1 fuel system was good for about 657 rwhp, which occurred at just 9 psi of boost. A quick swap to a '15 Corvette Z06 LT4 fuel pump supplied the injectors with enough fuel for 725 rwhp. All this occurred in a little over 10 days. And somewhere in the mix, Howard, who clearly doesn't sleep, worked with his friend Kris Horton from Cars By Kris on a rendering of the 2016 Camaro. The folks at Big Shot Creatives used this as a template for the graphics that currently overlay the Summit White paint.

Before heading to the track, Redline made sure the chassis was in order. The stock wheels were swapped for Weld Racing S77s in 17x10 rear and 18x5 front to clear the stock Brembos. Not only would these help shed weight, but also mount a set of Mickey Thompson 295/45/17 drag radials for optimum traction as well as M&H Front Runners to reduce rolling resistance. Since suspension upgrades weren't available yet, Redline went ahead and fabricated its own parts using 1 1/4-inch chromoly tubing and Heim joints. Though not ideal for a daily driver, the hard-core upgrades to the rear toe rods, trailing arms, and control arms would provide the stability for the Sixth-gen to go well into the single digits. Redline even swapped out the factory shocks and springs for custom coilovers, using double-adjustable AFCO shocks, and worked with The Driveshaft Shop on some custom axles.

After clicking off a few 10-second runs with a best of 10.55 at 137 mph, it was time to strip it down again. Redline was on a mission, and they weren't wasting any time. The re-sleeved LT1 block from Race Engine Development was paired with custom Manley 4.130-inch dished pistons, 4.000-inch stroke crankshaft, and 6.125-inch forged rods. Redline went with LT4 casting cylinder heads, which were already built for boost, to squeeze the combo with a 10.5:1 compression. The heads were modified, though, using Redline's template, to accept the LT1 intake manifold bolt pattern. Brian Tooley Racing valvesprings, trunnion upgrades, and a Comp Cams 232/248 duration bumpstick with 0.635/0.660-inch lift and a +38 percent fuel lobe completed the valvetrain. The engine was sealed up with Total Seal rings and a Katech valley cover (to negate DOD).

Even with the LT4 fuel pump and upgraded fuel lobe, the much larger 427-cubic-inch engine was out of fuel at the same 9 psi. Thankfully, Redline had planned ahead. The new engine was put together with an MSD Atomic intake manifold plumbed with eight 950cc injectors from Fuel Injection Connection. A stand-alone fuel system with an in-tank pump, dedicated PTFE -8AN fuel line, and Aeromotive regulator supplies up to 600 hp of supplemental fueling. Redline has its own control box to activate and modulate the system via boost pressure. PLX wideband O2 and fuel pressure sensors were tied into an AMS-2000 boost control to push the turbos beyond the 9 psi wastegate springs with some measure of safety. At its last session, Redline hit 915 rwhp at 6,250 rpm and 880 lb-ft of torque at 5,200 rpm at 16 psi.

While those peak numbers sound plenty healthy, Redline is far from finished. On its first trip to the track the turbos were much more happy, yet still didn't build boost until Third gear. It clicked off a rather lazy 9.95 at 148 mph with a 1.82 60-foot. Step one is going to be swapping out the exhaust housings on the turbos for something with a smaller A/R ratio to help them spool faster. Step two is a new converter. "The stock converter locks up almost immediately. So the trick is going to be getting a converter that will slip enough to build boost but not piss off the electronics."

Tuning the new 8-speed has required a steep learning curve, and it has taken quite a bit to get it to cooperate. Throw in the supplemental fuel system, AMS-2000, and E92 ECM, and it is a marvel that Tanner can juggle all of these variables. But this sort of challenge is exactly the reason he started this project. By pushing the envelope, Redline is moving forward into the next generation with guns blazing. Direct-injection and sophisticated 8- and 10-speed transmissions are just the next frontier to be conquered in the hot rodding world. Thankfully, we have a few brave souls willing to step out into the unknown.