What Happens When You Mix an Artist with a Car Guy? This 1956 Chevy Bel Air

A Work of Art: Retired art teacher Richard Fisher’s 1956 Bel Air hardtop is the completion of his artistic vision 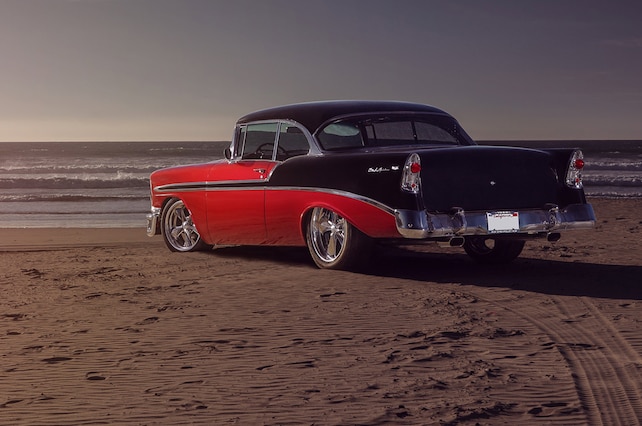 There is no denying the artistry involved in a custom car build. Between the colors, working with—and enhancing—the factory lines, and achieving the desired overall feel of the vehicle, a finished car truly is a work of art. However, when you take the passion of a dyed-in-the-wool car guy and combine that with a formally trained artist you get Richard Fisher, from Santa Maria, California. “I’ve been drawing since the age of five,” said “Fish,” as he’s known to his friends. “My father started me off by encouraging me to copy characters from the Sunday comics. Teachers throughout my early years encouraged me with art materials and gave me my first ‘one-man show’ in the third grade.” As he grew up, Fisher won multiple awards along with an art scholarship. In college, Fisher not only got his art degree but a teaching credential as well in order to pass along his talent to the next generation.

After spending 37 years with the Lompoc School District as an art instructor, District Art Coordinator, and Performing Arts Department Chair, Fisher hung up his teaching robes and focused solely on subjects which were near and dear to his heart. You see, throughout his career as a teacher, one of Fisher’s greatest passions were classic cars, with his roster of classic vehicles owned in the past five decades numbering in the triple digits. Fisher elaborated, “I have always been a car nut. Ever since I graduated from high school in 1956—which happens to be my favorite year—I have owned hundreds of classics.” So really, it’s no surprise that his latest classic is none other than a 1956 Chevrolet Bel Air.

For this project, Fisher teamed up with Chris Jensen of Central Coast Hot Rods to do the full frame-off restoration and build. Fisher had the ’56 hardtop for four years before seeking out Central Coast Hot Rods for some relatively minor work. “Originally, I went to see Chris about a disc brake and power steering conversion. I got to the shop and saw all the cars he was building, some with the body completely off and I said, ‘That’s what I want done to my car,’” said Fisher of the start of the project. At first glance, the ’56 is only subtly different than how it rolled off the showroom floor—other than the 4-inch drop.

Robert Boudesseal at Central Coast Hot Rods lovingly restored the stock bodywork with a subtle shave on the hood. Beautifully rechromed bumpers accent the Black and Inferno Red DuPont (now Axalta) paint Jensen applied to the exterior. To get the mean stance of the car, Superior 2-inch drop spindles and 1.5-inch lowering springs coupled with Monroe shocks and stock A-arms get the front end nice and low. Out back, 2-inch lowering springs coupled with 2-inch drop blocks get the rear stance where it needs to be, and Monroe shocks keep the ride nice. Polished Foose Nitrous II wheels (18x7 front, 20x8 rear) wrapped in Nitto rubber adorn the car to give it just the right look. Williams side motor mounts, transmission crossmember, and rear shock mounts were utilized, and the frame and all of the remaining suspension components were powdercoated. All of the old rubber bushings were replaced with polyurethane versions. To improve and update driveability, power steering and power disc brakes were added.

Providing the muscle for the ’56 is an Edelbrock 350-cubic-inch crate engine with an Edelbrock Durashine Performer intake, topped with a 600-cfm carburetor and Edelbrock air cleaner. A Mahson aluminum radiator keeps the engine running cool, while a Classic Auto Air air-conditioning system keeps Fisher and company cool. A March Performance serpentine kit keeps the engine bay looking pristine. An MSD Ready-to-Run distributor keeps the fires lit, while Sanderson ceramic-coated headers feed into a 2.5-inch aluminized exhaust, fabbed up by Central Coast Hot Rods. A 700-R4 transmission sends the power back to a 10-bolt rearend built by Central Coast Hot Rods with a 3.73:1 gearset and limited-slip differential.

Moving inside the Bel Air, the most apparent modification right off the bat are the seats. Coming from a Lexus SC300, they have been reskinned in black vinyl to match the custom door panels and carpet from Adam’s Upholstery. Central Coast Hot Rods fabricated and painted the console and the one-piece headliner, which has become a hallmark of Central Coast Hot Rods’ Bel Airs. A chrome tilt column houses the column shifter and reproduction ’56 Chevy steering wheel. All the instrumentation was sourced from Classic Instruments, and an Alpine DVD head unit and speakers provide entertainment for Fisher.

“I can’t say that there is anything that I would do differently with this build,” Fisher said, reflecting on the 4-year process. “I’m very happy with the way it turned out. The color combo is outstanding and the stance is just right. I love the overall look of the car.” That’s saying something, coming from someone whose entire life has revolved around aesthetics. “The plan for the ’56 hardtop was to be my last project,” Fisher explained. “Once you are bitten by the classic car bug, it’s really hard to turn off the itch to build one more,” he laughed. Since Fisher is firmly embedded with the creative spirit, in addition to his artistic talent we’d be willing to bet that his illustrations will only hold him over so long before he gives in to the classic car itch once again.