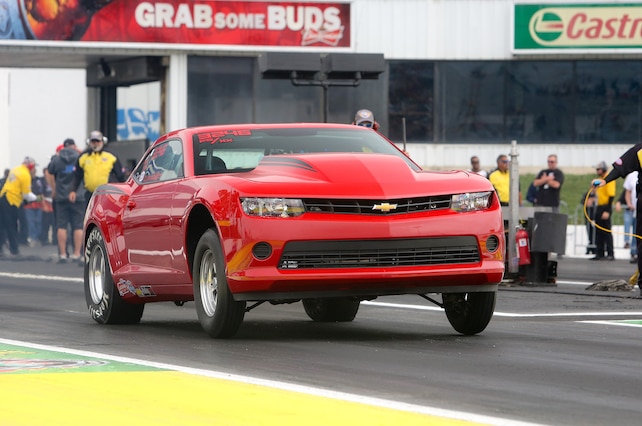 According to NHRA, the supercharged engine in Clay and Thomas Arnett's 2014-spec COPO Camaro makes 530 hp. The physics, however, tell a far different tale as the Camaro's race weight is 3,550 pounds (with driver) and Clay Arnett has gone as quick as 8.323 at 165.80 mph in NHRA Stock Eliminator competition. A quick run through our calculator pegs the supercharged 350-cid engine around 1,200 hp in order for the father/son COPO Camaro to run those kinds of performances.

That is impressive when you stop and consider NHRA has strict guidelines that racers must adhere to when competing in its Stock Eliminator category. Arnett made a name for himself last year when he paved the way for Factory Showdown cars to get into the 8.40s and, ultimately, the 8.30s. He briefly held the title of “World's Quickest Stocker” last summer with an 8.389 performance during the NHRA national event tour stop in New Jersey at Old Bridge Township Raceway Park. He has since traded that title back and forth with a rival Ford Cobra Jet Mustang.

The car is technically a 2012 COPO Camaro (No. 65), but the 327-cid-engine package has been replaced with the larger 350-cid combination from the 2014 model. Arnett competes in the Factory Showdown segment of Stock Eliminator and is classified in the FS/XX category. Backing the engine is a TH350 transmission that was built at Arnett Racing Transmission. An ATI Performance torque converter has been placed between the transmission and the engine.

Induction
A Whipple 2.9L supercharger is the main ingredient in the induction department. NHRA restricts the blower speed, but the engine still sees a maximum of 15–16 psi, depending on the weather conditions.

Cylinder Heads
The LS7 cylinder heads come directly from the Z06 Corvette engine program, which are CNC-ported from Chevrolet Performance. The intake valves measure 2.205 inches and are made from titanium. The exhaust valves are sodium filled and carry a 1.615-inch diameter. NHRA prohibits additional porting or major work, but racers are allowed to do a multi-angle valve job.

Camshaft
Good luck getting a camshaft profile from a class racer, especially when the engine is very restricted due to class rules. NHRA allows Stock Eliminator racers the freedom to do anything in regards to the cam specs as long as it carries the stock valve lift. The supercharged 350-cid COPO Camaro engine has a maximum lift of 0.630-inch on both intake and exhaust. The father-and-son Arnett team worked with SRS Race Engines to come up with a custom profile.

Short-Block
Chevrolet Performance specs its LSX engine block for the supercharged engines, and it carries a 4.065-inch bore size. That combines with a 3.370-inch stroke on the Callies Dragon Slayer billet steel crankshaft to achieve the 350 cid. Callies Ultra 4340 steel rods connect the crank to the custom pistons (NHRA specs).

Fuel System
All COPO Camaros come standard with a complete Aeromotive fuel system from the trunk-mounted fuel cell to the Eliminator fuel pump, fuel filters, and fuel pressure regulator and the lines to connect it all. A set of 85-lb/hr fuel injectors delivers the VP Racing Fuels' C16 fuel.

Engine Management
All COPO Camaros come standard with Holley EFI Dominator systems, and Arnett continues to employ its services. The Dominator EFI system has special provisions for NHRA tech to monitor and prevent traction control and other illegal digital functions.