Ramos Rolls His Own: No excuses, no trailers, no regrets 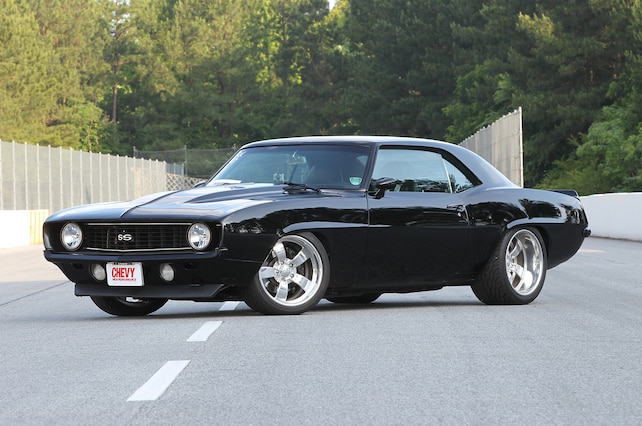 In this rude season of entitlements, it does a heart good to see someone taking control of their situation … and the responsibility for its outcome. No help wanted; no one to do it but him. If he didn’t know how to do something—major acts like welding and painting—he learned it on the fly. It was a matter of pride, and at the very least, a sign of respect for his parents.

Had Tony Ramos been able to pony up for everything, we still think he would have done the beautiful chore himself. He likes the intimacy of working with his charge, putting hands on everything twice, maybe three times before deeming it worthy. And luckily, he found a willing accomplice. Seems that his wife, Nicole, is a trooper, too; helped him install the heavy items … and then camped out by the car and water-sanded the body for three days running on just bread and water.

Tony’s statement out front: “This car was built entirely by me. There were no checks given out to professional shops to build the car. It was built and painted by me in my garage. This car isn’t a trailer queen. I drive it to every event.” Which is to say the ’69 wasn’t built to a particular discipline; it includes notions and equipment from several different categories that reflect Tony’s desires. Most of all, it was built as a driver, one that Tony could actually drive to autocross extravaganzas.

“Having never done a restoration before, I knew I wanted to do everything myself,” he offered. “After taking my plain Jane ’68 Camaro to a show, I saw a stunning black Pro Touring ’69 and knew I had to have one.” He bit down hard and bought locally, a rolling, rotting atrocity for $4,000. Then the fun began.

Tony never imagined that he wouldn’t be able to do it. He tore the thing down to nubbins, but had never touched a welder in his life, so he got one and learned how to use it to renew the floors, the quarters, and the rocker panels. With the car so disposed, he erected mini-tubs and modified the fenders and quarters around them to accommodate the wider wheels that danced in his mind’s eye.

The mechanical recipe was a lot simpler. Tony secured an LS6 and had it hopped up a little at Rolling Thunderz (Toronto) with a Howards cam, the preferred 243 cylinder heads, and a brace of Stainless Works headers trailed by a 2 1/2-inch MagnaFlow stainless steel system. As grand touring and lots of highway miles would be the plan, Tony would abide nothing less than a clutch pedal and a double-overdrive transmission.

To mow through the autocross course and avoid grazing those pesky point-penalty cones, he brought the suspension down to basics. The RideTech TruTurn steering kit (2-inch drop spindles, steering arms, drag link bracket, and tie-rod assemblies) was combined with Speedtech upper and lower control arms, RideTech air springs, adjustable shock absorbers, and a 1 1/8-inch antisway bar that operates in concert with a Speedtech torque arm fixture, RideTech coilovers, and a Panhard rod. With this setup, total body drop is 3 inches. Good for the stance and even better for bringing the center of gravity that much closer to the ground. Adjunct to this, 275/35 and 335/30 BFG KDW stickies ride on 18x10 and 18x12 Rushforth Fuel light rims.

Tony didn’t need anything more than the basic interior layout but he departed from the norm with a fabbed instrument panel and—get this—BMW M3 Vader bucket seats. He made the mounting brackets and set them in, then looked behind him and decided to customize some more BMW buckets for the rear so that the interior would be proportional. He joined both pods with an artful custom console.

“I figured since I could learn how to weld, I would be able to tackle the paint. I looked at a few tutorials and videos online and decided to buy what I needed. I went to Home Depot and got $40 spray gun. I had to make a spray booth in my garage by putting up sheets of plastic and flooding the floor to keep the dust down. Considering it was my first time and that I did it with a cheap spray gun, the paintjob turned out great!” Well, of course it did.

“I take it on long trips across Canada and the U.S. After attending a Goodguys event three years ago, I got hooked on autocross. I’ve been to the Motorstate Challenge three times; the Optima Faceoff at Road Atlanta and Daytona; the Commerce, Georgia, Chevy High Performance Nationals; and the Muscle Car Challenge in Aurora, Ohio.”

Anything cool happen along the way? “One of the most memorable times I ever had in this car was at the CHP Nationals when Brian Finch jumped in the driver’s seat and we went around the autocross a few times. The other was driving the high banks of Daytona under the lights!”

What would you do differently were there a next time? “I would definitely have a Detroit Speed subframe, a 315/30 front tire, bigger brakes, and Forgeline wheels,” he said. “The car has never let me down. It is more reliable than any other car I own. In conclusion, my dream was to build my car from A to Z and not write a check to get it done. I am fulfilling the dream by driving my car to all events with no trailer and not have to worry about anything going wrong. After all, I have touched and worked on every component. It would be easy to fix.”