The Second Coming: This is the pro street ’55 Chevy 150 that almost wasn’t 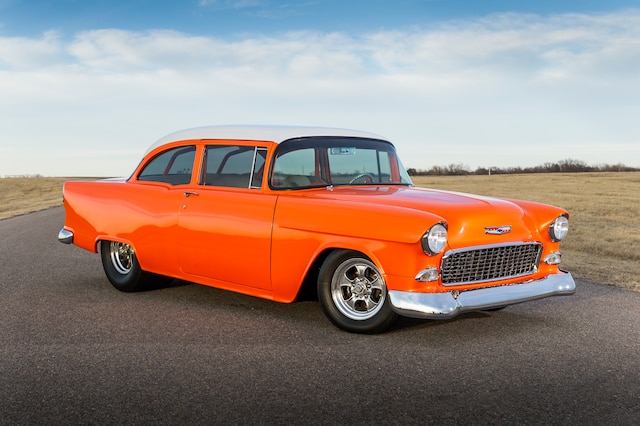 A lifelong dream has become reality for Randy Wagoner with the completion of this beautiful ’55 Chevy. The project almost didn’t happen, as he owned the car once previously before selling it to a friend and moving on to a different project.

“It was a running, smoking, rusty old ’55 Chevy that needed everything. I wanted to build a Pro Street Chevy and didn’t want to cut up a good one so we settled on a price of $2,100, and I took it home and put it into the garage,” says Wagoner. “But, between work and my boys in school and playing sports I never had time to work on it. After a year and a half I sold it for $3,500 to a friend of mine and told him if he ever decided to sell it I wanted to be the first to be able to buy it back.”

A year later, Wagoner located another running ’55 that had an older restoration performed so that car was purchased and taken home, and the family had quite a bit of fun with it for a while. It still wasn’t the Pro Streeter Wagoner craved so he sold it off and put his money in the bank.

Fast-forward 4 years. The phone rings and on the other end of the line was Jack, the friend to whom he had sold the first ’55, with an offer for Wagoner to buy it back.

“I went to look at it, and he had started working on the car but lost interest. He offered it to me for $2,000, including all of the parts he had for the car, so I loaded it up and took it home—and said to myself, ‘It’s not leaving again. I’m finishing this car into a Pro Streeter,’” says Wagoner.

Remember the first time around, Wagoner described the car as a “rusty old ’55 Chevy,” and that hadn’t changed while Jack owned it. The entire body needed resurrection. Wagoner started working long nights and long weekends; every chance he could carve out some spare time he was working on the car.

First, the car went to Bruce Philbrook’s to weld in a new S&W Race Cars back-half frame kit, which was subsequently painted for rust resistance. New floor braces were installed, along with patch panels to replace the rusted-out sections. From there it went to another shop, owned by Mark Garringer, and with his help Wagoner installed all-new sheetmetal. The car needed new doors, quarter-panels, fenders, rocker panels, and even a trunk floor. Not unreasonable for a car boasting well over a half-century of history, but Wagoner was still in the infant stages of the 150’s resurrection.

“After taking the six-cylinder engine out and trying to install the big-block, one problem arose—the engine hit the firewall. So I cut the firewall out and moved it back 1.5 inches to accommodate the new 427 engine,” says Wagoner. “Then it was off to Dennis Rief’s shop for more help with the bodywork, panel fitment, and the final firewall fitment.”

Once all of the body modifications and finishing was complete it was off to Rob Blagg’s shop for a new hue.

“I told him to paint it orange and tan. He said, ‘Not tan. It needs to be white and orange.’ I wasn’t sold on that but trusted him, so I went with it. He wouldn’t let me see the top until everything was done, but he was right. It turned out awesome!” says Wagoner.

With the paintwork complete, final assembly began back at the Wagoner home base. In addition to his own labor, he enlisted both sons—Cory and Ryan—along with wife, Shelly, to perform much of the labor in the home garage.

“We started putting it together piece by piece. Every bolt is new. There were many late nights and lots of scraped knuckles, but we got it done,” Wagoner explains.

The chassis is based around the aforementioned S&W Pro Street back-half weld-in kit with a 9-inch Ford rearend housing that’s stuffed with a Detroit Locker diff, Strange 31-spline axles, and 4.11:1 gears. The 32-inch ladder bars are from S&W, as is the Panhard bar, and the rear rides on a set of QA1 coilover shocks and springs.

In the front, there’s a set of Fatman Fabrication A-arms that have been narrowed 1.5 inches, Heidt’s 2-inch drop spindles, and another pair of QA1 coilovers. Four-piston Wilwood brakes featuring 12-inch rotors are at all four corners.

The exterior has been modified with a chrome grille and one-piece bumper from Danchuk. The rear bumper from California Bumper Boys has been adapted from a ’55 wagon, and Classic Xenon hi-lo headlights have been installed. The outside mirror is from a ’58 Impala. House of Kolor Tangelo Orange and Snowflake White pigment covers the ’55’s flanks. The hood bird has been removed and a Rocky Hinge fuel door hinges behind the taillight.

Ross at No Coast Customs in Wichita, Kansas, was responsible for preparing the interior. A set of Dodge Intrepid bucket seats covered in tan leather hold Wagoner in place behind the wheel, and the same upholstery was employed in covering the door panels and console. Rex at Affordable Street Rod Wiring set up the harness and installed a set of Auto Meter gauges into the car. Eric Sisks at Tornado Alley installed an eight-point, mild-steel rollbar. Lokar accelerator and brake pedals are onboard, while steering is controlled through one of ididit’s polished steering columns and an American Racing Hopster steering wheel.

The 433-cubic-inch L88 engine between the framerails was machined by Chet Wilson and assembled by JR Strom. An Eagle 3.750-inch-stroke crankshaft and 6.135-inch H-beam connecting rods combine with 12.0:1 Ross pistons and a Lunati Special Grind camshaft to provide the Pro Street-style pop and cackle. Flip Williams assembled the Turbo 400 transmission, and the power flows through a 10-inch, 3,500-stall Neal Chance torque converter.

“We had the engine for a few years before I bought the car back so we had some fine-tuning to do,” says Wagoner. “We took it to the shop owned by Mike Martens and Jim Higbee, where we had more late nights to wrap up the project. With the help of Mike Martens, Jim Higbee, and Rick Martens, we fired it up and my wife drove it for the first time. I was in heaven—my dream came true; owning a Pro Street ’55 Chevy. I couldn’t have done it without the help of my wife, kids, and many friends.”

Reach for the sky. Preston Carden’s 1956 Chevy gasser has a perfect stance and an injected small-block V-8.

Jason Chinn bought his 1957 Chevrolet 150 at a Mecum auction in Florida and wanted to make some changes of his own to it after bringing it home.