Project Orange Krate, our 1971 Camaro, Debuts at the Boston World of Wheels 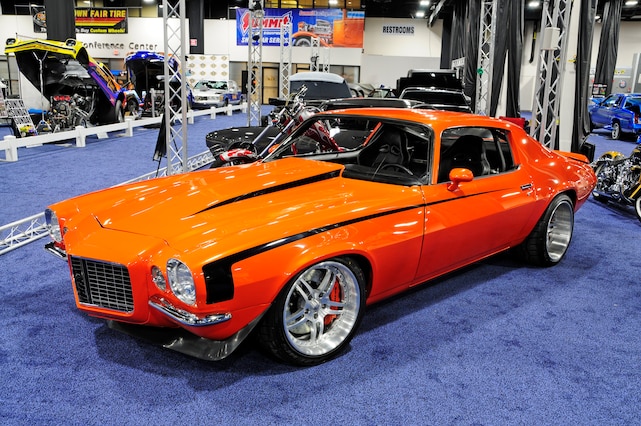 It started out as an idea for a magazine project car a few years ago. In fact, it was back in the days when Camaro Performers was still being published (RIP). We had driven the Detroit Speed Inc. second-gen Test Camaro owned by Kyle Tucker and instantly fell in love with how that car handled. It stuck in our heads that we should build a magazine project car just like it, or at least one as close as possible.

Peter Newell, owner of Competition Specialties in Walpole, Massachusetts, caught wind of what was swirling around in our brains and wanted to be part of the mayhem. It was one of those phone calls we never expected to get but were thankful we did. Pete basically said “if you can ship that car and all the parts to my shop, I’ll build and paint it for you guys.” Needless to say, Project Orange Krate, our 1971 Camaro, was on a hauler heading eastbound for a full rebuild. Of course, after the body was mediablasted quite a bit of sheetmetal damage and rust was exposed, but these days that’s par for the course with just about any old muscle car.

After years of busting knuckles, and the loss of his best friend during the build, Pete hung tough and charged through in his one-man shop. Basically by himself, he filled, cut, chopped, replaced, gapped, prepped, primered, sanded, welded, bolted in, then painted what you see here: The Chevy High Performance 1971 Camaro project car. The car made its debut at the 2016 Boston World of Wheels show on April 1, and east coast editor Chuck Vranas gathered a few photos from the show as a little teaser of what you’ll see once we do a full feature on this amazing car.

Yes, there are quite a few companies that contributed parts, and if not for them this project would not have been possible, but for the purpose of this mini-feature, we are giving full props to Peter Newell at Competition Specialties. His talent and numerous all-night thrashes are what made it all come together. As you can see, this is one outstanding Camaro. Man, getting that first rock chip is going to suck!