Could This Be The World’s Coolest Vega? 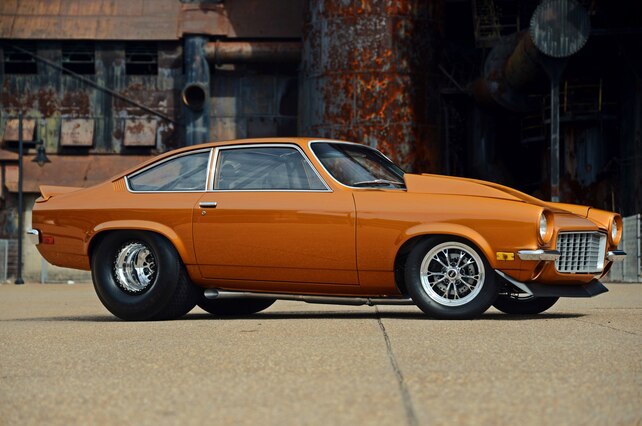 Dave Haney is used to crowds. Big crowds. And, interestingly enough, he’s not from the big city. Nope, not at all. Just a small-town kinda guy with a lust for something different. But the funny thing is, whenever he shows up with his all-out, built-to-the-hilt Pro Street Vega, a crowd of Chevy fanatics just seems to appear out of thin air. It’s a case of motorized magnetism to say the least.

Dave was born and raised in Norristown, a suburb on the outskirts of Philadelphia. His neighborhood was upper-middle class, and while the local kids were out getting involved in bad stuff and spending all their money on having a good time, good ol’ Dave was hard at work at the local gas station, saving his hard-earned cash for some choice American muscle. By the time he was 16 he had not one but two classic Chevys to call his own. It seems the Bow Tie brand steered him in the right direction in life, and Dave’s never once looked back.

The first car he found to call his own was a sweet ’66 Chevelle SS, a pretty nice score for a kid who was just old enough to get his driver’s permit. That would be his mode of transportation for a few months until Dave spotted yet another killer ride. “I spied a ’72 Chocolate Brown Z28 sitting in a gas station nearby and I knew I had to have it. So I hit my dad up for the cash to buy it, and then paid him back,” states Dave. You’ve got to hand it to Dave; he not only had good taste, but the determination to match.

Dave was infatuated with the fast cars of the local street scene from the get-go. Deep down he knew he had to be a part of it so he started getting involved with street racing in his locale. On the weekends, he and his buddies would head down to Philadelphia and hook up with other racers to run some quarter-mile challenges. Dave remembers how droves of hot cars, ranging from ’50’s to ’70’s era muscle cars, would congregate on the straightaways in and around Philly looking for a quick race. Good times were had by all.

About 10 years ago Dave got bit by the Pro Street bug and soon got the itch to build a racer. He started checking out the local ads, looking for a donor car to make into his new ride. He soon spotted an ad for a Vega not too far from his home; a car that in a previous life had been a Pro Streeter. He was intrigued. He liked the styling of the Vega, as to him it just looked like a smaller version of a Camaro. He decided to go take a look.

The car had been raced up till recently and was now just a rolling chassis. But Dave saw a lot of upside to buying a car that had a lot of the modifications done to it already, even though he knew this was going to be his own build. A deal was struck and Dave had his starting point: a highly modified ’71 Vega.

The project got off to a rough start. Firstly, the car was shelled and taken down to its bare bones. However, a year into the build Dave was diagnosed with cancer, and an already shaky start to this build got even worse. Then he had two strokes and went blind for a period of time. Needless to say, the project was shelved while Dave recovered from the trauma.

Dave shifted gears and enlisted the help of Ted Monsell at Trick Works in Telford, Pennsylvania. Dave was happy to hand the project over to the shop as they had a great reputation in the car community. The two men then sat down and decided on the correct path to take to build the ride of Dave’s dreams. And what he wanted was something out of the ordinary.

“I wanted to build a Pro Street-styled ride right out of the ’70s that would not only kick ass at the major shows, but also be a car I could put on the street and use it for what it was intended for,” stated Dave. It was going to be a ride that would blur the line between Pro Street and show car. With that, Ted assessed what needed to be done and the two agreed on a game plan to build the best Vega in the country.

Ted took the chromoly chassis and did a lot of updates to it. A Chris Alston’s Chassisworks frontend was mounted, as was a Ford 9-inch rear. A Moser centersection is stuffed with a healthy set of 3.73 Motive gears, and a 32-inch ladder bar suspension with Koni coilover shocks handles suspension duty under this ride. Lastly, a set of Wilwood brakes helps this Vega stop on a dime.

The body has loads of upgrades, and the exterior sheetmetal was massaged to perfection. In the engine bay, welds were ground and seams smoothed. A custom firewall was also installed. The front wheelhouses were removed to give an open look under the hood. Doorjambs were molded, smoothed out, and cleaned up. The split front bumpers were made from two original bumpers, cut and welded together, and the rear wheelwells were stretched to hold the massive meats out back. To top it off, a custom cowl-induction, fiberglass hood was built by the shop. Overall, the car has a modified look without losing any of the factory Vega styling.

The engine build started off with a Chevy small-block punched out to 355 ci. Next, the cylinders were stuffed with Lunati 10.5:1 pistons. Dart 225cc aluminum heads along with a Dart intake were sourced and added to the mix. A Lunati cam with 0.552/0.570-inch lift gets the valves jumping. To further clean up the look of the car, all wiring to the engine is hidden through framerails and under the dash. A handmade velocity stack, with over 25 hours of metalwork, covers a 750-cfm Holley Dominator carb.

A custom engine plate holds this motorized piece of art all together. Sanderson Street Rod Shorty headers get the spent gasses out, and an ATCO radiator helps keep this ride cool, even during those stifling East Coast summers. An MSD box handles the spark. All brackets, even the hood hinges, are custom-made from scratch! The engine set back is 12 inches for better weight distribution. To top it off, over $3,500 worth of ARP fasteners adorn this ride; from the engine bay to the wheels. Believe it or not, all the screw heads are indexed for conformity!

The interior is a work of art, being custom-made from fabricated sheetmetal. The only fabric in the interior is on the seats. Floors, door panels, and dash are all handmade from aluminum. Even the shifter case is a custom piece. The gauges are Auto Meter, the steering wheel is a removable Mark Williams piece, and the shifter is a Hurst Pistol Grip Quarter Stick. The Kirkey seats, laced with Deist belts, are backed by headrests made from driveshaft loops. The chromoly rollcage is another work as stylish as it is safe, and is finished off in gloss black. All interior tinwork was done by East Coast Muscle Cars in Craley, Pennsylvania.

An ATI Turbo 400 trans and 10-inch 3,500-stall converter get this ride into gear. At the corners, Weld V-series wheels shod with 155/R15 Firestone rubber up front and 33x19.5x15 Mickey Thompson Sportsman Pro rubber out back get the power to the pavement. Last but not least, the paint is PPG Fusion Orange, which was a factory color on Avalanches, Cavaliers, and Hummers. Dave decided to add more pearl so this Vega’s skin tone would “explode” out in the sun.

Today, Dave is enjoying the fruits of his labor. After a rough start, the Fusion Bomb is now hitting the show circuit and racking up points wherever it goes. It was up for the Ridler Award at the 2015 Detroit Autorama and has already won too many trophies to list. Dave would like to thank all that have made this possible: his family, Meguiar’s Car Care, Trick Works, Paul Z, Pat Fox, Larry Roberts, Tri City Plating, Bux Customs, PJ Autoworks, and East Coast Muscle Cars for their help in making this dream become a reality.