10 Years of The Rarest Early Corvette Colors and Options! 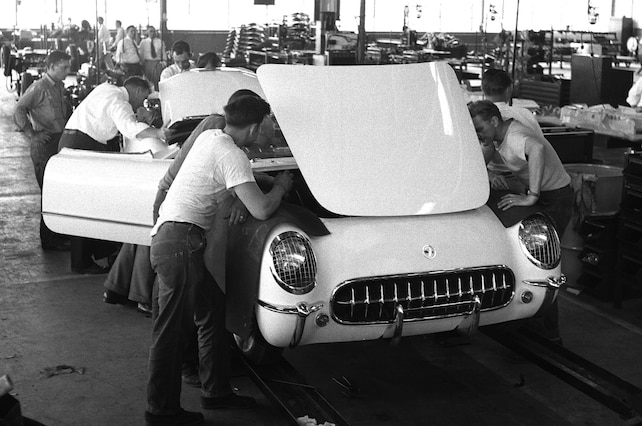 From the Corvette’s earliest origins—the first was completed on June 30, 1953—to the current model year, there have been rare examples produced. Some so rare that although an RPO number was listed as an available option in the order book, no customer checked the box to have his or her Corvette equipped that way. Take, for example: there weren’t any 1970 Corvettes produced with the 450hp, 454ci LS6 option. Look to 1971 and there were only 188 LS6 Corvettes made. Note: in 1971, the LS6’s compression ratio was lowered and consequently horsepower dropped to 425.

Life for the fiberglass-bodied Corvette began with Harley Earl’s 1952 excursion to Costa Mesa, California, where he witnessed firsthand how the Glasspar boat company was utilizing fiberglass to produce its G2 sports car. Harley shared his findings with GM brass and the decision was made to manufacture the Corvette body out of fiberglass.

For 1953, Flint, Michigan’s Factory 1 was where the first 300 Corvettes were built. Since all 300 cars were equipped exactly alike, the only difference is the VIN number.

In 1954, Corvette production moved to St Louis, and of the 3,640 ’54 Corvettes made that year only four were painted black. 1955 was the only year the Corvette was available with either a V-8 or a six-cylinder engine. There were only seven ’55 Corvettes sold with a six-cylinder engine. For 1956, only 111 Corvettes left the factory with the “special high-lift camshaft.” I could be wrong, but I think that particular cam was known as a Daytona grind.

In 1957, only 51 cars were made with the RPO 684 Heavy-Duty Racing Suspension, and although the RPO 679 Positraction with 4.56:1 gears was available, none were ordered. All of the Corvettes produced in 1957 were painted in nitrocellulose lacquer with of the exception of 65 cars that were painted with Inca Silver acrylic lacquer. In 1958, all Corvettes were painted with acrylic lacquer with solid Inca Silver the least produced production color with only 193 units sold. Even scarcer yet was Inca Silver with black coves at 36 produced; but the rarest-of-the-rare 1958 colors were the four cars that left St Louis in an unrecorded, non-production color of which one was left in primer.

The rarest convertible top color in 1959, at 217 issued, was turquoise and it was only available for 1959. The year 1960 was the first time for aluminum heads with five sets produced for Briggs Cunningham’s 1960 Le Mans effort. And, they were the only 1960 heads made with staggered valve cover boltholes. In 1961, 17 Corvettes were painted a nonstandard color, color combination, or left in primer. Jewel Blue, at 855, made was a one-year only color. In 1962, RPO 242 signified positive crankcase ventilation (PCV) and was added to an un-kept number of California bound cars at $5.40 per car.

The Corvette Sting Ray, first produced in 1959 as a race car, appeared in 1963 as a production model, with only 12 cars receiving RPO P48 Cast Aluminum Knock-Off Wheels. From 1953 until 1962, not one Corvette left the factory with a paint code anywhere on the car. The only way to tell if a 1953-’62 Corvette came factory original in a certain color is if it is unquestionably original paint, or there are traces left of the original paint remaining somewhere on the car.