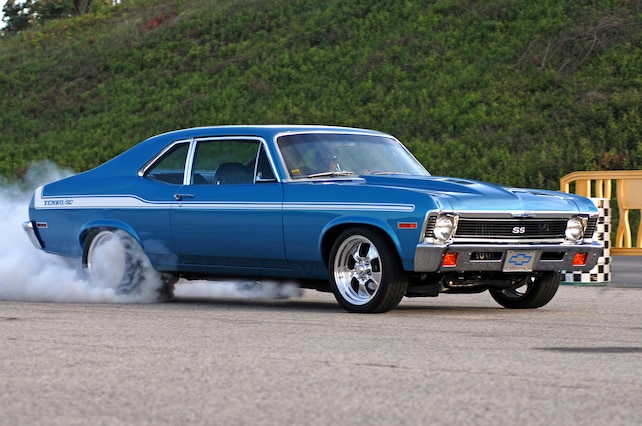 As most of us know, the muscle car era came to an abrupt end around 1971 or so. Once the ’60s were over it was time for the “me” generation to sell out, get rich, and watch the “cool” blend into polyester suits, political correctness, and disco balls. Oh well, it was fun while it lasted. And perhaps nobody had as much fun when it came to Chevrolet supercars than Don Yenko.

Yenko, whose Canonsburg, Pennsylvania, Chevy franchise is now legend, had begun his foray into the world of performance while road racing Corvettes in the late ’50s and early ’60s. After ordering and building a batch of SCCA-legal Corvairs under his own Stinger brand in 1966, he decided to go big with 427ci conversions on the just-released Camaros the following year. By 1969, the factory was doing these same L72 transplants for Yenko and other performance-minded dealers right on the assembly line via the COPO process. But the Yenko crew went one step beyond and offered that engine in a dealer-converted Nova. Suddenly, a 427ci Nova became a very serious car; only 7 of the 37 built are known to have survived the era, and Don himself—in an interview with author Greg Rager for Musclecar Review magazine in 1987 (shortly before his death in a plane crash)—questioned the sanity of that program, grimly calling his 427 Novas “almost lethal.”

And then came 1970. Sure, you could get a 454 in Chevelle, Corvette, and later, a second-gen Camaro, but Don Yenko was not putting his name beyond a dealership deck tag on those. The insurance adjusters had made it almost impossible to own a big-block Yenko anything. Don instead decided to pull a literal fast one by putting 350s into Novas. Not any old 350, but the new LT-1 360-horse model designed for the Corvette and Camaro Z28. When the Vega was announced, Yenko decided that he would return to road racing-type stuff, and Yenko V-8 car production from that era ended.

So let’s just say the world was perfect at that time. What if things had continued on? What if Don had decided to tell the insurance guys to “shove it” and pushed forward undaunted? Well, Yamil Fonseca, a car painter by trade for Atlanta Street Rods in Commerce, Georgia, decided to do just that with a budget 21st century re-creation of what might have been. What you see here cost just under $20,000 and took seven months to complete, with Yamil’s ASR pals helping him do the work (thanks to bossman Carlos Sanders).

He will tell you flat out that the condition of this car when he bought it was bad; poor use and storage had left it suffering from body rot. The metalwork included new floors and quarters, plus a replacement 3-inch cowl hood, but once it was respectable again, he shot the Southern Polyurethane Systems (SPI)-supplied Pro Spray code 26 LeMans Blue paint himself, adding Yenko SC graphics as a final touch. Inside, the Nova was returned to its as-built form, with a Grant steering wheel, some dash-mouthed gauges, and a B&M shifter were the only additions to the cockpit.

Meanwhile, with the chassis gone over, Pro-Shock front shocks and disc brakes were added up front. Since the idea was to keep it similar to the 1970’s version, no major changes were done to the rear suspension. The final touch was using new-generation 17-inch American Racing wheels on all four corners with BFGoodrich rubber connecting it to the ground. Even with the sticky, wide rubber, the 10-bolt factory differential, stuffed with 3.31 cogs, has so far handled the task.

By 1971, no longer was the 427 king of the hill; the 454 took honors as the big dog. Needless to say, Yamil went with the larger cubic inches. The engine is still available in salvage form thanks to the 1980s Chevy truck applications. The replacement was left in a fairly mild form (after all, Yenko wasn’t doing L88 Novas, either). A rebuilt stock bottom end was topped off with 9.0:1 Speed Pro pistons and Sealed Power rings—it won’t spin to 7,000 rpm but makes lots of bottom-end torque. Crane supplied a 0.515-lift hydraulic street cam, 1.7 ratio rockers, and tighter springs. The heads are stock 454 units. Meanwhile, upgrades include Hooker headers, a Weiand intake, Edelbrock Performer carb, a ProComp distributor, Moroso wires, and a Holley fuel pump. The transmission also got a little help via a street-stall B&M converter.

And with one foot hammering down on the pedal, you begin to realize perhaps Yenko’s reflections were right. This thing is almost lethal, indeed.