It’s Not Easy Being Green: How Evan Mathieson made a frog prince from one of GM’s toads 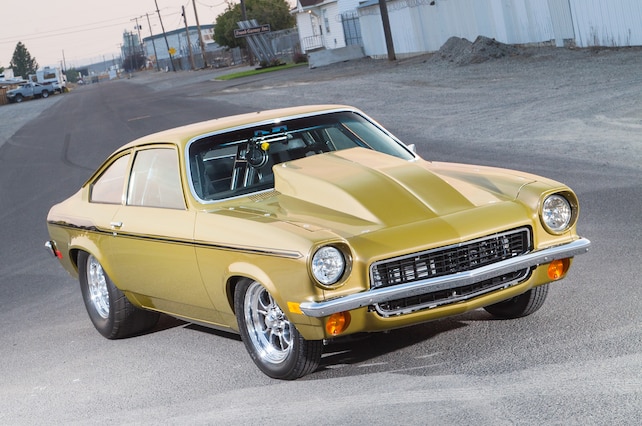 Woe betide the Chevy Vega. A handsome car cast in the likeness of its big brother Camaro, it suffered about the worst domestic engine in modern automotive history. They were cheap on the lot but pretty much worthless the moment the ink hit on the sales sheet.

But not even the Vega would trade spots with Evan Mathieson. His Vega is one of the coolest built, but its story is as troublesome as GM’s open-deck aluminum block. And we couldn’t tell it half as well as he can.

At 18, he swapped an engine in a Nova in exchange for the orange ’71 he and his dad tried to buy six years earlier. But, “I ran into money trouble and had to sell it.”

“About two years after that, my dad bought a full-race 1980 Monza and gave me the 1973 Vega that we bought together when I was 12. I had plans of building the ’73 into a race car but had to sell it because of running into financial issues once again.”

See where this is going?

“In the meantime, my friend Bill Spurgin had a 1973 Vega that we worked on. One day I went over to Bill’s garage and he had a gutted, purple 1972 Vega sitting there.” He bought it the next day. Though a roller, the only things good were the fenders, roof, doorjambs, one quarter-panel, the front control arms, and the rear axle.

“I bought a Jegster front clip, a Checkered Racing ladder-bar back-half, a Jegs cage kit, and several chunks of 2x3 steel tubing,” he says. He assembled it in the driveway at Spurgin’s house. It was November. All he had was a couple of tape measures, a square, a protractor, and a level. “It definitely was more of your back-to-basics hot rod-type build,” he says.

It took about 2 1/2 weeks to get the chassis rolling again and another few months to mount various parts of the car. “And at this point, I pretty much ran out of money, but rather than selling the car as I had with (the) other Vegas, it went into storage for a couple of months.”

Mathieson took the opportunity to finish the car in his dad’s newly expanded garage. Around that same time the local track went NHRA. “I knew my rollcage would not pass, so I cut out the ’cage and ordered a Funny Car kit,” he says. He fit the ’cage—this time notching the joints rather than piling beads in the corners—and took it back to Spurgin’s shop for welding.

“Over the next three years, I built the firewall, floors, and mocked up every component you need to make a car work, which sometimes took two or three tries,” he admits. Then things took another turn. “While I was painting the chassis, a friend was building a really nice show car. I kept thinking, ‘Maybe I should try to make my car a little nicer and not just a race car.’ Plus, I had just gotten a new set of rear Aerospace Engineering brakes that seemed too nice to just half-ass the car.”

“I ended up painting the rearend body color because for the last four years we had all tossed around so many color ideas,” he says. He kept coming back to the factory Oasis Green Poly. “But I couldn’t just paint it a factory color,” he notes. Inspiration turned up in an unlikely place: a Jeep. He bought some and shot the rear axle, thereby locking himself in. “(I) was stuck with it because I didn’t want to pull it back out from under the car to repaint it.”

The gutted doors and hatch didn’t fit the car’s new direction. “It took about a year of looking and three other Vegas to get all the body parts and interior pieces I needed,” he says. He prepped the body at his parents’ place but took it to Spurgin’s place for color. “(This) would never have turned out as good as it did without Bill’s help,” he praises. Mathieson took the car back to his folks’ place where his friend Tony Evans wired the car.

And that was just the body. His dad runs a nasty 12.5:1 468 in that Monza—a car that runs 9.49-9.60 e.t.’s at 140-145 mph. Though a great template, it isn’t an inexpensive engine. “I collected engine parts for five-ish years,” he recalls. Friend Mike Cofini helped him assemble it but something happened during tuning. “I had about 50 to 60 miles on it when it started to squeak really loud.” The squeak turned out to be a roller tappet that stuck in the block and broadcast its needle bearings through the rest of the engine.

Bear something in mind. Still in his 20s, Mathieson is a kid. And when he started down the path with this particular car, he made only $10 an hour. His folks also pushed him out of the nest at one point during the build. “(They) had enough of me living there and spending on the car rather than moving out, which was understandable,” he admits. But he’s no dummy; he invested in a house of his own, even though it put off finishing the car a little longer. Case in point, “It took me about 2 1/2 years to put the engine back together.”

He’s also wise enough to understand that he’s not the only one who sacrificed. “Without the help of friends and family and a really understanding girlfriend, I probably wouldn’t have the dream car I always wanted,” he says. “I tried to build most of it (but) I understood when I needed help and I’m glad I have a group of great friends to help when I needed it.

“Even though there are things that I sometimes want to change, the car turned out exactly how I wanted it to,” he notes. “So to be blunt, I wouldn’t do anything different because I wouldn’t have ended up with the car that I now have.”

Leave it to Motion Performance to Pack 454 Inches of Pavement-Pounding Power in a 1974 Chevrolet Vega!