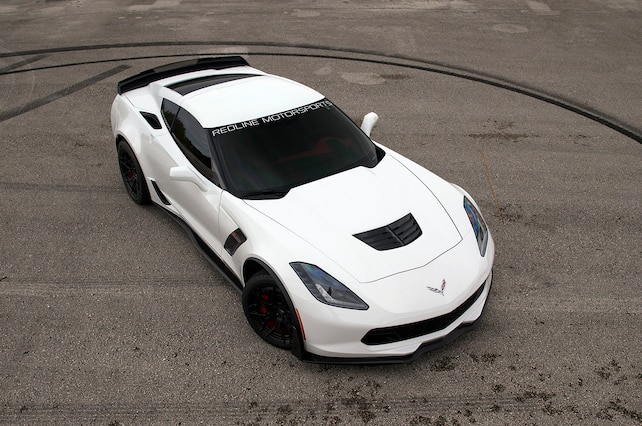 From the second the C7 Z06 hit the market the knock from builders and tuners was the hot-air factory for a supercharger. The tightly packaged blower was near its max already with little ability to turn it up. The crew at Redline Motorsports has been hard at work on its alternative to the tiny 1.7L supercharger, engineering solutions for a variety of problems that limited the LT4’s potential. Having intimate experience with East Coast Supercharging’s Corvette kits—including the Stingray kit used on Howard Tanner’s other C7—that was to be the basis for a brand-new, intercooled compressor system.

“ECS set us up with the 2200R and brackets off the LT1. They sent the kit but we sent almost everything back but the head unit, pulley and bracket,” said Tanner. ECS’s dedicated 10-rib drive with an ATI balancer and green Kevlar belt replaced the factory 8-rib. “We’ve had zero issues with slip; even at 21 psi. The curve goes right up and never skips a beat.” Rather than go with the standard air-to-air, front-mount intercooler, Redline designed this system to be the ultimate street race weapon with an air-to-water intercooler. “It is a closed system with its own reservoir. We actually use the factory heat exchanger, pump and reservoir plus another to fill and let the system burp.” By not blocking the radiator, Tanner said the car is ideal to drive at low speeds, with no ill effects. It even has antifreeze in the system so that he can bring the car back up to New York when Pompano Beach, Florida, gets a bit too steamy. But the ultimate goal, he says, was more stable intake air temperatures.

Redline was eager to retain many other factory features, while still getting more functionality out of them for the higher horsepower goals. For example, the 2015 Corvette Z06 mule has a legitimate air filter inside a fabricated airbox that uses the factory inlet pressure sensor to keep all factory controls working. Howard said many tuners simply turn this off, but it is a great sensor to tell you how much air is coming in. To keep the MAF sensor happy, Redline used two red TiAL blow-off valves, which keep idle airflow near stock. The torque based control of the ECM was killing the timing at idle since it was seeing a lot of airflow.

Turning their attention to the vacant spot atop the cylinder heads where the Eaton 1.7L supercharger once sat, Redline decided to use a factory LT1 intake. “You can’t bolt an LT1 intake on LT4 heads, and the LT4 heads are better between the material and the chamber, so we didn’t want to swap the heads. Instead we re-machined the cylinder heads for the LT1 pattern.” While the heads were off, Redline swapped the exhaust valves for larger versions and installed a Brian Tooley Racing LT4 spring kit. The new valvesprings and retainers were needed to handle a healthier camshaft with a +38% fuel lobe from Comp Cams. Rather than limit the cam phaser, “we redesigned the upper cam gear so that it is fixed like an LS3.” Not only did Redline delete variable valve timing, but cylinder deactivation (DOD/AFM)—using a Katech valley cover to seal up the engine (along with the factory seven-layer LT4 head gaskets and ARP 2000 bolts). “This is not for the faint of heart. This thing is built for kill mode.”

The keystone to the entire build was a supplemental fuel system that could match the tremendous airflow of the supercharger system. Redline machined a 5/8-inch aluminum plate to house two Injector Dynamics 850cc squirters that sit between the intake and throttle body, just like a nitrous plate. “We use a proprietary controller and separate fuel pump in the tank to spray 300hp worth of fuel. It has separate fuel lines and kicks on at a certain boost pressure. Putting fuel on the back of the intake valve is beneficial for power. It adds torque.” Using this fuel system, Redline forgoes the band-aid of multiple methanol nozzles that C7 tuners have been forced to employ. Instead, he can simply dump a pale of C16 in the tank and go.

Breathing through a set of 2-inch long-tubes from American Racing Headers, the Z06 has put down 931 hp with over 834 lb-ft of torque on Redline’s chassis dyno. That’s on a completely stock bottom-end! It made 750 hp at just 12 psi. Tanner had his work cut out for him in tuning the factory E92 computer and supplemental controller. Tuning a direct-injection engine at this power level has taken some adaptation of thought process. “Traditionally, we add fuel like you were making lemonade. To make more, you add more water and sugar.” However, as you add more fuel to a DI engine within that short window of time, it isn’t necessarily combusting all of it. Further complicating the matter, injection timing is everything with DI. And throwing in an aftermarket cam completely throws off the stock injection timing. “I had to make a spreadsheet to find a correlation and know where to move the injection timing.”

A stock converter and 8L90E eight-speed transmission are still employed, which has held up to dyno pulls and awaits its first trip to the track. Traction is aided by Mickey Thompson 345/35/18 ET Street drag radials mounted on custom 18x12 wheels. Redline worked with ADV.1 to design a wheel to clear the massive Z07 carbon brakes, including an 18x6 front that would mount an M&H Front Runner. The goal was to have a wheel that not only fit dimensionally, but also made sense on a six-figure supercar. “I have been wanting to do this for a while,” Tanner told us, who intends to sell more of these to high-end C7 customers. From the side it looks like a high-dollar supercar, but on an angle you can see the bigs and littles befitting a single-digit drag racer. Though this car was built for the street (aka Mexico Racing League), we have no doubt it will make a few mid-9-second passes at over 150 mph at Palm Beach International Raceway in due time.

There are certainly easier aftermarket solutions now, but Tanner’s C7 Z06 afforded Redline the opportunity to innovate solutions and work on the bleeding edge of C7 modifications. The crew will employ the data and experience learned on this build to continue pushing the envelope. That’s what having a test mule is all about.

An anonymous source reports a lap time at the famous German road course that will put the 2015 Corvette Z06 in the pantheon of production supercars.