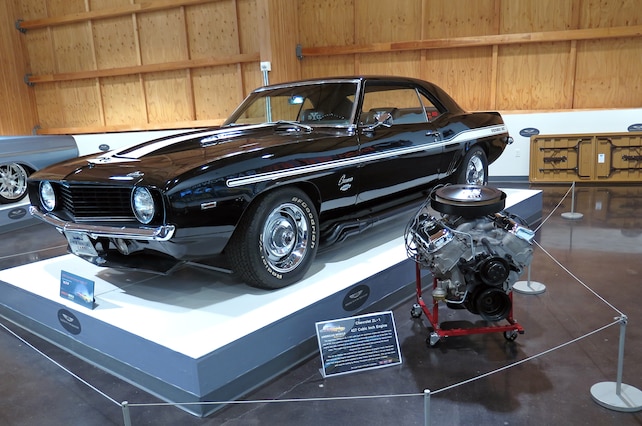 As far as automotive museums go, America’s Car Museum in Tacoma, Washington, located next to the Tacoma Dome, is a relative newcomer to the game. Yet, heading into just its fourth year in existence (opened June 2, 2012), it is the largest in North America and features some of the most iconic and rare cars in the world from a plethora of genres. Many of the 280-300 cars on display are from the extensive collection of the late Harold LeMay. The city of Tacoma donated the land for the museum, while Harold’s wife, Nancy, put $15 million into the project.

But what brought us to the northwest part of the country were the performance, muscle car, and racing exhibits. For horsepower enthusiasts, the American Muscle – Modified Madness exhibit features a great gathering of restomod cars from 1964-1972. Most are donned with Pro Touring and Pro Street influences flexing their muscle on the main floor. You’ll need to spend a little extra time here to soak in the meticulous craftsmanship on many of these cars. You may even recognize one or two from past issues of Chevy High Performance.

The American Muscle: Rivals To The End exhibit spotlights the factory muscle car battle of the late ’60s and early ’70s. Ford, Chevy, and Chrysler fans were deeply divided with the only means to settle their differences being a trip to the dragstrip. We’re talking 40 years before the brand faithful would use the Internet to express their opinion on why theirs was better than the others. With that said, there’s a good chance one of your favorites is here.

The Legends of Motorsport: The NASCAR Story exhibit features some of the most relevant race cars from NASCAR’s long and storied history—some from the distant past and others from the not-so-distant past. This exhibit was an added bonus to our trip.

With the number of rare and important cars on display in this comprehensive car museum, it takes two floors and over 165,000 square feet of exhibit space to show this extensive collection. Whether you are into street rods, muscle cars, or historical vehicles rising from the early 20th century, the America’s Car Museum is one stop to put on your automotive-fueled travel plans.

For more information go to americascarmuseum.org.