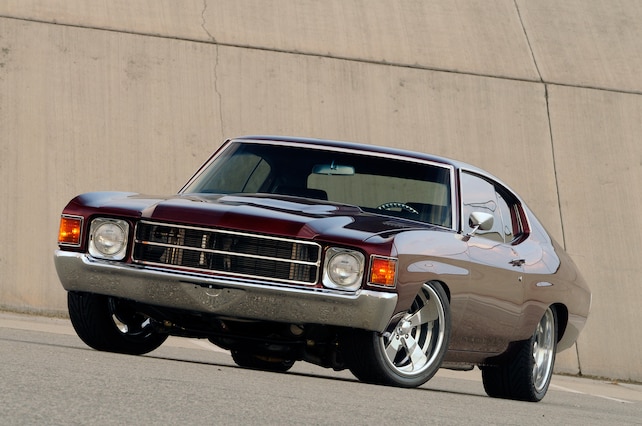 Many of us remember the first car we built, and it will always hold a special place in our heart. Generally, it isn’t because the car was all that great but because it was our first shot at turning a collection of parts into a fire-breathing muscle car. Sometimes, however, a builder tries to go for the “brass ring” on his first build. Such was the case with Chris Gordziel and his father, Steven’s, 1972 Chevelle. Chris recalls, “I’ve always wanted to build a car with my dad, but I never thought it would be something this involved. I was attending Wyotech in Wyoming with a focus on collision and paint refinishing. I really wanted a project car to work on at school so I called up my dad and pitched him the idea. To my surprise he actually said OK. After a quick search on eBay we found a starter car near San Diego, where my parents were living.”

Chris had seen pictures of the car but had no idea of the condition it was in. The ’72 was shipped to Chris at Wyotech and immediately realized he was in for a huge challenge. “On the Friday it came off the truck I drove the car for about an hour, and by Sunday afternoon my buddies and I had the car stripped down to the last nut and bolt,” remarked Chris. The more they disassembled, the more problems they uncovered. With all-new sheetmetal ordered, Chris and his friends Tyler Ewing and Andrew Hurvey hung new quarters, doorskins, tailpanel, and outer wheelhouses, and patched the typical rust found in the lower cowl area. All of this was done with a small compressor, basic cutting tools, and a MIG welder in a 30x30-foot storage unit. While the trio was doing the bodywork, the bent and cracked frame was sent over to Frontier Rod in Cheyenne, Wyoming, where Kim Kollar massaged it back to its original specs. For extra strength, he boxed the ’rails. For looks, he made the frame smooth as glass.

After graduation, Chris moved to San Diego and brought the unfinished Chevelle along. While working on the car in his parents’ garage, Chris made great strides in finishing up the bodywork. Eventually he landed a gig at Best of Show Coach Works (BOS) in San Marcos, California. Chris told us, “I never knew how nice paint could be until seeing what they had accomplished at BOS. I decided to make this car a statement for the shop—and myself—and to prove the quality of work we were capable. We spent a lot of time paying attention to details on the car: panel fitment; smooth, tight lines and gaps. It was all especially important.”

To save his dad some cash, Chris spent a lot of time doing work off the clock. He put in over two weeks of labor getting the rear bumper just right. While it would have been easier to just narrow the bumper, Chris thought it would look better to widen the back of the car. Dick Kvamme and Jon Lindstrom gave Chris guidance but allowed him make the big decisions and do the lion’s share of the work. Once the body was prepped just right, Chris again took over and sprayed the car himself. After going over paint chips with his dad, the pair decided on PPG Cabernet. “I had painted a couple of cars prior to this one, but nothing as nice, and I had never used paint this expensive. I was nervous because I had zero experience with three-stage paint and have heard horror stories about how difficult it can be to apply. I spent a Saturday in the booth for about 12 hours. Before locking up to go home, I took one more look at the car and knew it was going to be killer.”

Going that extra mile, Chris added rally stripes. They were created by laying down two fewer coats of the mid-tone paint in the stripe area. At first glance many people don’t even notice they’re there, but once they do Chris gets bombarded with questions about how it was done.

While the body was getting picture-perfect, Chris was also working on the drivetrain for the heavy Chevy. His dad knew that a big car like the Chevelle needed an equally massive mill under the hood. Soon, a 540ci big-block was sitting in the shop. Unfortunately, Chris found that the big-block was full of metal fragments and his warranty was worth only a bit more than the paper it was written on. Rather than waste time fighting that battle, he sent the engine over to Don Lee Auto in Rancho Cucamonga, California, where Tim Lee tore it down and replaced the scarred crank along with all the bearings. Tim also found that the cylinder walls were damaged, so the block was bored and new forged Mahle pistons were added. They also decided to move from a hydraulic flat tappet to a full roller valvetrain. The 9.5:1 pump-gas friendly mill consists of Merlin 345 iron heads, a Comp valvetrain, and a Holley 870-cfm carb sitting on a Merlin single-plane intake. Spark from the MSD lights the fire while a Ron Davis cooling system keeps the temps in check. The headers are 2-inch Doug’s units modified by Jimmy Warner of Warner’s Performance in Oceanside, California. Jimmy also fabricated the coated 3-inch exhaust system and made the mufflers tuck up neatly under the body.

It’s a torque monster that chassis dyno’d at 469 rear-wheel horsepower and a stump-pulling 550 lb-ft of twist. Backing up the big-cube engine is a TKO 600 five-speed and a bulletproof 12-bolt posi rearend.

Both Chris and his dad agreed that stance was key to the Chevelle having the right look, so an order was placed to RideTech for one of their complete ShockWave kits. To counteract the forward momentum of the Chevelle, Chris added massive Wilwood six-piston brakes to the front of the car and matching four-piston binders to the rear. Rolling around these big brakes are Bonspeed Huntington billet wheels in 18x9 front and 18x10 rear with Michelin Pilot Sport rubber in 275/35 and 315/30, respectively.

The interior is decked out in factory flair with just the right amount of modifications. Autos International in Escondido, California, re-covered the stock seats in black leather for a richer look. With the seats installed, Chris then moved forward with new door panels, a smoked glass kit from Prodigy Customs in Orlando, Florida, and a new set of Stewart-Warner gauges housed in a Covan’s dash.

Since Chris had wired the whole car, including the air system, he decided to tackle the audio system as well. An Eclipse CD5000 head unit controls the Rockford Fosgate amp and the four-pack of Focal speakers. It’s a combination loud enough to be heard over the raucous big-block under the hood—not an easy task.

As far as we can tell, the only problem for Chris and this build is that he’s going to have a hard time topping it. After all, it’s rare that anyone’s first attempt at anything turns out this sweet.