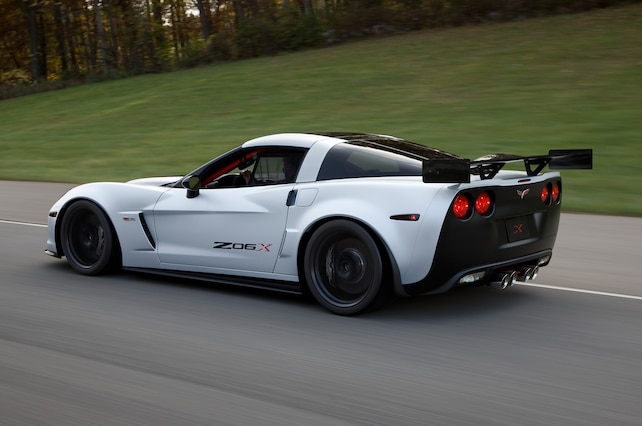 There are many different and interesting subcultures within the larger Corvette hobby. Some feel that Corvettes should stay as they were when they rolled off the assembly line. Others can’t “not” personalize their Corvette. A few make their own signature versions, such as the Baldwin-Motion Phase III Corvettes or the Guldstrand and Callaway Corvettes. And then there’s the racer crowd that’s been lusting for a club racer since the 1960s. While Duntov’s racer kit “off road” options were a big help, the concept of a “club racer” is all that, plus a lot more—just a few ticks away from “race car.”

Thanks to the success of the C5-R and C6.R Corvette Racing Team, as well as the dozens of competitive independent late-model Corvette race cars, the “club racer” issue was heard more and more at Corvette clinics. Corvette product planners ask for plenty of feedback from customers and fans: “What do you like? What don’t you like? What would you like to see?” Fans and owners love being listened to and it’s obvious that the C7 is as good as it is because of this measure of the Corvette product planner’s inquiries.

The Corvette Racing Team and Doug Fehan were the guests of honor in November 2012 at the Corvette Racing Legends event at the Simeone Museum in Philadelphia. Fans tried in vain to pump Fehan for info about the C7. All he’d say was, “Let me tell you about those taillights. A lot of Mustang owners are going to be looking at them for a long time!” Doug is such a kidder. Then he was asked, “Why don’t you offer a club racer Corvette?” Doug answered, “Yes, we could do that. The cars would cost over $200,000 and we might sell 100 units. Look, we’re in business to sell cars—lots of cars. However, we have thought about it.” That last part was said with a big grin.

Up until the successful launch of the C5, Corvette designers had enough to contend with just keeping the car alive. But the C5 was a game changer. The basic structure was designed with over 1,200 fewer parts and by 1999 engineers were telling Chief Engineer Dave Hill that they’d pretty much taken the C5 as far as they could and it was time to start working on the C6. So, with some time flexibility, Corvette engineers and product planners started working on a strippo Corvette, one that would be easier to make into a club racer. The end product was the 1999 Fixed Roof Coupe Corvette that only cost $394 less than the base model. They also calculated that the reduction of amenities left the car with little curb appeal and not much savings. But the bright side was that the Fixed Roof Coupe became the Z06 in 2001, the unofficial Corvette “club racer.” As astonishing as the C5 Z06 was, the C6 Z06 was a quantum leap and as close to an off the showroom floor Corvette race car as was ever offered. But don’t we all like “more?”

With the C6 Z06 being closer to a track car than a street car, Corvette designers gave the car a little push. While work was progressing on the C7, product planners had some fun with the parts bin and dished up a set of club racer concepts at the 2010 SEMA Show. Since Pratt & Miller is the brain trust behind the ultra-successful C5-R and C6.R race cars, it made sense to bring them in to help create club racer versions of a “possible” 2011 Z06X Corvette and the Camaro SSX. All you can really say is, “It’s about time” and “When can we get one?” Chevy wasn’t saying “Yes,” but they weren’t saying “No.” The concept is simple since Chevrolet already makes plenty of parts for “heavy-duty” applications; wouldn’t any red-blooded car guy love a design task such as this? Corvette product planners and engineers came up with a package of off-the-shelf hardware, along with some genuine racing goodies that are sure to raise your blood pressure and temperature. In one respect, it shows just how out front the Corvette team really is. Except for a few parts, almost everything presented is mass produced by Chevrolet.

Designers started out with a basic Corvette Z06. While the C6.R race cars are built on the base Corvette’s steel chassis, the Z06X would have the benefit of the C6 Z06’s all-aluminum chassis—a key feature to one of the lightest Corvettes produced in decades. While the supercharged LS9 monster motor might seem like the engine to use, the 505-horsepower LS7 is durable and race proven. Not that the 638-horsepower LS9 isn’t durable, but a supercharged engine for racing is a whole other animal. The factory parts in the Z06X include the Z07 Performance Package Brembo carbon-ceramic brake rotors and special brake pads, the ’11 CFZ carbon-fiber package that has the front splitter and side rockers, the carbon-fiber raised hood from the Z06 Carbon Edition, the ZR1 carbon-fiber roof panel and B-pillar and the racing pedal kit from the Corvette Accessory catalog. You could buy a new Z06 optioned out as outlined above (for the most part), but you’d only be half way there.

The Pratt & Miller side of the project includes more carbon-fiber parts added and others swapped out to reduce weight, such as an adjustable carbon-fiber rear wing, carbon-fiber headlamp buckets and a lightweight polycarbonate rear window. Like any serious race car, all of the sound-deadening material is removed. An SCCA-spec rollcage and window net are installed, along with a racing seat with five-point safety harness, a fire suppression system, a driver’s drink system and a video camera mount. Other goodies include a low-restriction air intake, a high-capacity radiator and cooling package, painted black lightweight racing wheels (19-inch in front and 20-inch in back) shod with Michelin racing tires, a mono-ball control bar bushing, adjustable stabilizer bars and adjustable camber plates for the coilover struts. The entire package was finished off with low-gloss Icy White Metallic paint with exposed carbon fiber, red accents, and a sinister-looking Z06X logo. Could they have added more? Oh, sure, but the objective here isn’t to build and offer a turnkey race car. No, in the tradition of the original Z06, L88, ZR1 and ZR2 Duntov racer options, the point is to offer a car that’s a few ticks away from being an all-out racing machine. They have to leave “something” for the racers to do, besides drive.

Overall, the Corvette Z06X and Camaro SSX are stunning examples of just how far GM has come in embracing something that fans have known for years—that Corvettes and Camaros make for fearsome race cars. Unfortunately, the Z06X never made it onto the option list for the 2011-’13 Corvettes. As beastly as the C6 Z06 was, the C7 Z06 is even more so. We’ve never seen Chevrolet push the performance envelope this hard. The Grand Sport will be available as a 2017 model and the mid-engine “Zora” is around the corner. The C7 Z06 is still young, so it wouldn’t be a stretch to see a C7 Z06X. Chevrolet seems to be full of surprises these days.

K. Scott Teeters has been a contributing artist and writer with Vette magazine since 1976. You can follow his work at www.illustratedcorvetteseries.com.

Check out the rest of the final installment of our Trend Setting series:

The horsepower masterminds at Lingenfelter Performance Engineering have just introduced a beefy package to add plenty of pony power to your C6 ZR1 Corvette. Designed for the General’s factory potent LS9, the Lingenfelter package increases horsepower to 750, with 730 lbs-ft of torque. Yes, 750 horsepower.

Michael Bayley's 2010 Chevy Corvette ZR1 is his project and he doesn't care what you think about his one-of-a-kind automatic ZR1. Bayley built this Corvette for himself and uses it for whatever he wants, be it track days, car shows, or street driving in either sunny South Florida or in his hometown of Selkirk, NY.

King of the Hill. it can mean many different things, but to Corvette owners and enthusiasts the world over, it only has one meaning - the ZR1.

In this feature article VETTE takes a look at the Chevrolet Corvette Z06X Concept, which debuted at the 2010 SEMA show and showcases how to create a full-on C6 track car - Vette Magazine

» Read More
The 6 Hours of Laguna

Laguna Seca has a new place in the American Le Mans Series schedule and a new race format and Corvette Racing was there in 2010.