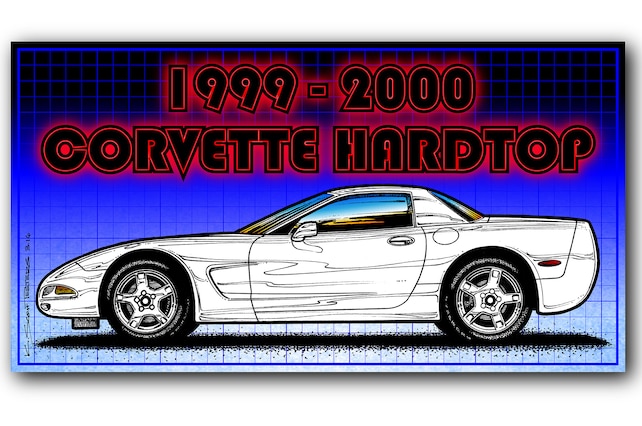 It is interesting how “time” changes perspective. Corvettes have always been performance sports cars. The first Mustangs were not “performance” cars; they were “sporty” cars that were later made into performance cars. From 1956 to 1980, Corvette buyers that wanted more grunt always had optional performance engines to choose from but there was never a separate performance model until the arrival of the ZR-1 in 1990. All of the legendary performance engines—fuelies, 396, 427, 454, LT-1, etc.—were engine options, not separate models. And from 1981 to 1995 there wasn’t a performance engine option at all! The LT4 performance engine was available in all 1996 Corvettes as a last hurrah for the C4. This would be the last time customers could order a performance engine in a basic Corvette. But when the 2001 Z06 arrived, it was like a bolt of lightning on a hot sunny day that no one was expecting. The moniker “Z06” hadn’t been used since 1963 and was mostly forgotten. Ever since 2001, except for 2005 and 2014, the mighty Z06 has been as track-ready as a production Corvette model ever has been. How we arrived there, was via a most unusual route—the longtime lust for a strippo Corvette.

In the car industry, if you don’t sell enough of a particular model it won’t be around for long. When the C5 Corvette was being planned, Corvette sales were dismal. The sales record holder was the ’79 Corvette coming in at 53,807 units, with the ’84 model coming in second at 51,547 units. Despite consistent improvements in the C4, as the years rolled on, sales were in a steady decline. When the new C5 was being developed, management issued a mandate—“25,000 units per year, or else!” Fortunately, Dave Hill and his team had a three-prong plan for the Corvette to hit its sales numbers. 1997 sales came in at 9,752—not good. But then again, the car wasn’t introduced until January 1997 instead of in the autumn of 1996 along with the rest of the 1997 Chevrolet models. But with the introduction of part two—the new convertible—in 1998, sales rocketed to 31,084 units.

Part three was supposed to be an “inexpensive” fixed roof, hardtop version. Almost from the beginning in 1953, there has been a contingent of management in GM that wanted the Corvette to be something other than what it was. (Remember the proposed four-seater ’63 Corvette?) The planning days of the C5 was no exception. In an attempt to boost sales, a “cheap” Corvette was seriously considered. The strippo model was to have a smaller 4.8- or 5.2-liter engine, cloth seats, roll-up windows, smaller wheels and tires, and an automatic transmission only. Sounds exciting, doesn’t it? (NO!)

A few prototypes were built and marketing tests were ordered. Fortunately, the strippo didn’t light anyone’s fire. Those surveyed felt that a $32,000 Corvette would cheapen the entire line. So the final decision was to make the hardtop a performance model with a manual transmission only and the Z51 suspension. The hardtop would be slightly cheaper with limited options, weigh a little less and be faster, but not by much. This was the pathway to the C5 Z06—but the cake wasn’t yet fully baked.

The engineering department had a surprise that the product planners hadn’t anticipated. Starting with the convertible body and chassis, the hardtop was permanently bolted and bonded in place. The net result was a 12 percent increase in chassis stiffness, making the new hardtop the stiffest production Corvette ever! Then they added the Z51 suspension, and took out 80 pounds of standard items. Car magazines since the ’50s have been complaining about the Corvette’s squeaks, rattles and lack of structural rigidity. No more! With 345 horsepower, this was a setup the magazine guys loved.

The GM bean counters must have hated this project. In order to keep the package cost below the 1999 Corvette base price of $39,171, they had to limit the availability of many options. The $38,777 hardtop model included the standard 345-horsepower LS1 engine, the six-speed manual transmission, the Z51 Performance Handling Package, a black interior with black leather seats and a choice of six exterior colors. What you could not order with the hardtop included an automatic transmission, magnesium wheels ($3,000!), power sports seats, an interior color other than black and Selective Real Time Damping. Interestingly, the Active Handling Suspension option was available on the hardtop.

The basic Corvette comes with more horsepower than most people will ever experience. The Fixed Roof Coupe allowed the suspension to better handle all that 345 horsepower with racer-like response thanks to the 12 percent increase in structural rigidity. This was the beginning of the Corvette engineers push to make the car’s structure more rigid. Racers do this by adding steel tubing that ties the front and back of the frame via the cowling and rollcage. Building this kind of structure into mass-produced cars is another challenge; one that the Corvette engineers have made successively better with each generation Corvette.

Once the 2001 Z06 was released, the C5 hardtop was not at all missed. It is still an excellent package and from an enthusiast’s standpoint, a cut above the base model. But without the serious performance goodies included in the Z06, the hardtop never developed much of a following. The extras included in the Z06 were very formidable: LS6 engine, titanium exhaust, FE4 Suspension upgrade, unique manual transmission, wider unique wheels shod with Goodyear Eagle F1 Supercar tires. Plus, there were the external visuals: mesh screens in the front grille and side vents and the rear brake scoops. The old saying about first impressions applies here—the press and buyers knew in an instant that the 2001 Z06 meant business. And remember, the FRC started out as a “cheap” Corvette, but when the Z06 arrived, it cost $47,500—$7,025 more than the base 2001 Corvette. Customers thought it was worth every dollar because in the first year Chevrolet sold 5,773 Z06s—that’s just 348 less than the total number of 1999 and 2000 FRCs sold.

So, while the 1999-2000 Corvette Fixed Roof Coupe quickly became yesterday’s news with the arrival of the 2001 Z06, the production numbers are still pretty low—4,031 in 1999 and just 2,090 in 2000. The 2000 model is arguably the nicer-looking version thanks to the new five-spoke wheels. Perhaps if the hardtop had something that was more unique besides just the top, there might have been some collectability there. But, we have to remember that the hardtop model was supposed to be the cheap Corvette. Fortunately, now that the Corvette is GM’s flagship performance car, Chevrolet and Corvette product planners are over the “cheap Corvette” thing. You can almost hear the C5 FRC’s soul crying out, “Don’t hate me because I was supposed to be a cheap date.” It’s OK C5 hardtop, we love you, too.

About the Author: K. Scott Teeters has been a contributing artist and writer with Vette magazine since 1976 when the magazine was titled Vette Quarterly. Scott’s Corvette art can be seen at www.illustratedcorvetteseries.com. His muscle car and nostalgia drag racing art can be found at www.precision-illustration.com.