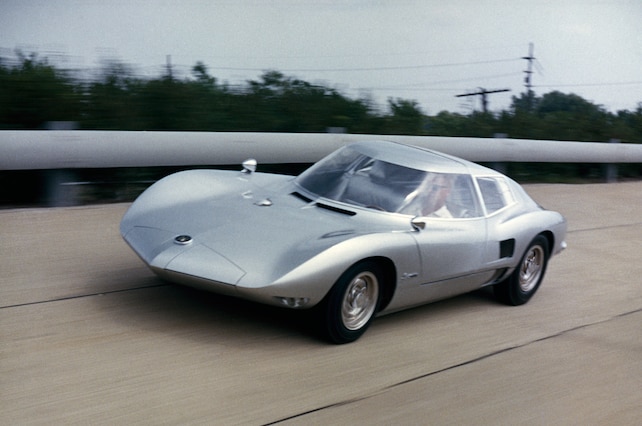 Father of the Mako Shark-II?

Concept cars are exactly what they are called—just a “concept.” Don’t look too closely at the details of how producible the car is because it’s just a concept of a car. What typically survives from any concept car is styling and design elements. The Monza GT and the Monza SS roadster were never intended to be replacements for the Corvette. After all, the basic platform was the rear-engine Corvair. Now, before you go, “Puke! Puke!” let’s go back to 1957 for a brief look at Chevrolet General Manager Ed Cole’s aggressive and innovative Q-Chevrolet line of cars.

Cole was a car guy that happened to be an engineer. His first big success was as lead designer of the Cadillac OHV engine that was later used as the basic design platform for the small-block Chevy engine. Cole loved new mechanical innovations and technology. After becoming General Manager of Chevrolet, he wanted to do something really big. He envisioned the entire 1960 Chevrolet line of cars being equipped with a “transaxle” and he called the new line the “Q-Chevrolet.” With the transmission hump eliminated, the interior could be opened up—especially on the fullsize Chevrolet. “Roomy” was a marketing position in the 1950s. Since the Corvette was part of the Chevrolet line, designers worked out the basics of a “Q-Corvette.” In hindsight, this was a prehistoric C5 Corvette. Imagine a 1960 Corvette wearing a “Sting Ray” like body, with four-wheel independent suspension, disc brakes, an all-aluminum fuel-injected engine, a dry-sump oil system, and a transaxle. Yes, it was a C5, 37 years early.

The entire Q-Chevrolet concept collapsed due to cost, but the transaxle survived and went into production in GM’s new VW Beetle-fighter: the Corvair. From the timeframe of 1960, the little Corvair was a pretty cool car—rear-engine, four-wheel independent suspension, a transaxle, and an all-aluminum opposed, flat-six engine. Styling was definitely late ’50s and sold fairly well from the start. In 1960, Chevrolet produced 253,268 Corvairs. 1961 turned out to be the Corvair’s best year with 337,371 units built, followed closely in 1962 with 336,005 Corvairs sold. 1963 to 1966 was a downward slide: 288,419 in ’63, 215,300 in ’64, 247,092 in ’65, 109,880 in ’66, with the bottom dropping out in ’67 with just 27,253 cars, ’68 saw just 15,399 Corvairs, and the final year was a paltry 6,000. Even the restyling of the ’65 model didn’t help. But at the height of the Corvair’s popularity, V.P. of Design Bill Mitchell saw potential in the Corvair’s unique platform and set two of his sharpest designers—Larry Shinoda and Tony Lapine—to work on a radical Corvair. Two cars were built; the Monza GT was a mid-engine coupe and the Monza SS was a rear-engine open-roadster. Neither car looked like anything else on the road, let alone a Corvair.

The Monza GT coupe is arguably the more interesting of the two concepts because of its mid-engine layout. The Corvair drivetrain was turned 180-degrees so that the engine was behind the driver and in front of the rear wheels—just like an exotic European sports car. The powertrain consisted of a stock Corvair engine (148 cid/102 hp) and four-speed manual transaxle. Since this was just an overall concept, the engine wasn’t enhanced for performance. The Monza GT had four-wheel independent suspension, four-wheel disc brakes and alloy wheels. This was pretty heady hardware for 1962!

About the body design; WOW! Where did Shinoda and Lapine come up with this one? This is 1962, three years before the debut of the Mako Shark-II. The family resemblance is obvious. Also, by this time, Shinoda most likely completed the design of the new Sting Ray, so he’d spent several years styling what was to become an American automotive icon. So he was used to drawing bold, swooping shapes that were dynamic. Coupled with Bill Mitchell’s affection for crisp, sharp lines (like a freshly pressed men’s suit), surface breaks with long, smooth curves, blended with sharp edges in the front and back. Even the windshield has a crease down the center. The curves and creases are so beautiful it’s easy to not notice that there’s no A-pillar. Now, unless they were planning to use “transparent aluminum,” this was never going to happen in a production car. But, that’s what concept cars are all about.

Getting in and out of the car was sci-fi show biz. The entire roof section, wraparound windshield and sides (where the doors should be) hinged forward and lifted up in one piece. You “stepped into” the car and sat on a single, fixed bench seat with a padded center divider/console. The struts that held the top up had an accordion-like pleated cover that looked sci-fi-like. The gas, brake and clutch pedals were adjustable. The dash had a tach and speedometer, and the console gauges were angled toward the driver. The steering wheel looked a lot like what we would later see on the ’63 Corvette. To access the engine and four-speed transaxle, the entire back of the car was hinged from just in front of the rear wheels and tilted back—again, just like an exotic European sports car. The rear window had adjustable louvers, a styling element that was later seen on the Mako Shark-II. The back-end styling angled forward and was scooped in with Sting Ray-like dual taillight clusters. This back end shape later influenced the 1965-’69 Corvairs. The fiberglass body was reinforced with plastic panels and since there was no structural B-pillar, there was a built-in rollbar, just like a race car.

The Monza GT was a startlingly little car. The Monza GT had a 92-inch wheelbase, was 162 inches in length (13.3 inches shorter than the Sting Ray) and 42 inches in height (7.8 inches shorter than the Sting Ray). Now, the ugly part: the headlights. They hadn’t yet figured out the flip-up or the flip-around style hidden headlights. Instead, they designed what they called the “alligator style” that had upper and lower doors that split open at the forward leading edge. As beautiful as the car was, the exposed headlights are that bad.

So, what happened? The car was never road tested or developed; it was just a concept car. Roger Penske once drove the car and said that he liked it better than the then-current Porsche. But as they say, “Timing is everything.” Fitting a small, Corvair-based sports car into the Chevrolet lineup was not likely. After all, Chevy only sold 21,513 ’63 Corvettes. So, from a bean counter’s perspective, that’s not much of a market. It is written that the Monza GT “came close” to production, but “how close” could have been weeks, days or hours. But when Ford unleashed the Mustang and started the Pony Car Wars, a pint-sized Corvette didn’t stand a chance. The same thing happened to the Monza GT-inspired ’64 Pontiac Banshee, which looks even more like a C3 Corvette. Eventually, the Monza GT “theme” was picked up by Opel, styled by Erhard Schnell, and produced as the Opel GT from 1968 to 1973. The Monza SS was similarly styled, but in an open roadster configuration and no top whatsoever. Unlike the GT, the SS was closer to its Corvair roots and was a rear-engine layout. Both cars toured the car show circuit for several years. After the C3 Corvettes came out, the Monza GT and SS weren’t seen much.

The good news is that both cars survive and are now part of the GM Heritage Collection of cars that are parsed out to special car events. While the Monza GT never arrived in Chevy dealer showrooms, it is obvious that if there hadn’t been the Monza GT in 1962, there might not have been a Mako Shark-II in 1965. And if there had been no Mako Shark-II, what would the C3 have looked like. The entire “Shark” profile might not have happened! Or, here’s another possible path; a Monza GT, enlarged enough to fit a big-block in place of the Corvair flat-six, then the C3 would have been a mid-engine. That’s an interesting notion as we wait for the mid-engine Zora Corvette.

K. Scott Teeters has been a contributing artist and writer with Vette magazine since 1976. You can follow his work at www.illustratedcorvetteseries.com.

This is the last installment of our 17-part series highlighting what we think are 51 of the most interesting and unique experimental, prototype, engineering study, and show car Corvettes ever built. Aside from the 1957 Q-Corvette, every one of the cars we presented were handmade, one-of-a-kind cars (except for the five-of-a-kind 1963 Grand Sports). Most of the cars have survived, but a few are long gone. Engineering study cars tended to never be seen again after their initial exposure, such as Duntov’s white 1969 ZL1 set up like an A/Production racer. After the studies are completed there’s no need to keep the complete car. The good parts were salvaged and the rest was trash. They can’t keep everything.

One car I wish had survived is the 1963 Four-Seater Sting Ray Split-Window Coupe. It was an interesting concept that, at the time, “made sense” to Ed Cole. A “Thunderbird fighter Corvette.” And since he was the General Manager of Chevrolet then, the designers and builders got it done. If it weren’t for the few surviving photos, we wouldn’t even have known about the study. The car was never road tested so we have no idea what such a Corvette would be like.

I suppose we could chalk it up to a different corporate culture, but clearly Chevrolet isn’t producing anywhere near the number of “experimentals” today as they did in the ’60s and ’70s. From 1960-1969, 19 experimentals were produced. The number dropped to eight from 1970-1979. And from 2000-2016 only two experimentals were built: the 2009 Stingray Concept and the 2010 Z06X Concept (both featured here).

I have to say, it was very exciting growing up in the ’60s and ’70s when it seemed that Chevy was just cranking out these unique experimental, prototype, engineering study, and show cars. It kept us all stoked in anticipation of what the heroes—such as Duntov, Mitchell, Shinoda and the rest of the super-creatives—that designed Corvettes had sketched-out on a folded-up piece of grid paper in their shirt pocket, right behind their mechanical pencils and slide rule.

Check out the rest of the final installment of our Trend Setting series:

Paul Brown , owner of some of Doug Thorley’s Funny Cars, brought his Corvair and Chevy 2 Much Funny Car re-creations to show at the NHRA U.S. Nationals.

JB Granger set out to build the baddest 1966 Chevy Corvair on the planet, and it looks like that’s the case with the car he calls FnNader.

How many Chevy guys can say they’ve never bench raced about building a V-8-powered Corvair? We’ve all thought it, but few have made dream reality.

As one of the oldest shows on the Super Chevy circuit, Maple Grove has a storied past of a diverse and plentiful show car field. Check out the 2013 Super Chevy Show Event at Maple Grove Raceway! Follow along with some of the event highlights as well as the AMSOIL best of the best winners!

Check out the 10 Cool Bow Ties inside the 2013 SEMA show. There is a full selection of muscle cars here along with even a few Vans.

» Read More
1962 Chevrolet Corvair - Engine In The Front, Party In The Back