From the Archives: Sport Truck vs. The Real Thing 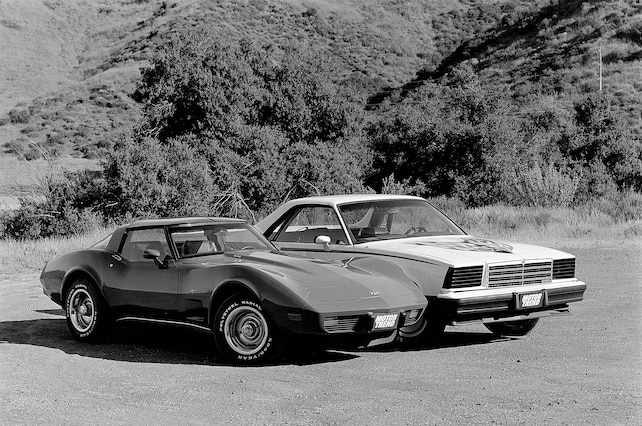 Corvettes have appeared frequently in Motor Trend magazine, often as the subject of comparison tests. In the Vette’s earliest years the magazine liked to compare it with the other two-seat personal car on the market, Ford’s Thunderbird. Later, as the Vette became a serious performance car, MT matched it with other serious performance cars, including the Shelby Mustang, Pantera, and various Porsches.

In the July 1979 issue, staffer Jim McCraw produced one of the magazine’s more unusual comparison tests, pitting an L82-powered Vette against a GMC concept truck called the Diablo del Calle.

“By traditional standards we are on shaky ground here,” McCraw admitted in his opening paragraph, questioning why anyone would compare “the pre-eminent American expression of the modern sports car, revered by maybe millions as the baddest car around” with “a variant of the El Camino concept that is over 20 years old….” But, he pointed out, both V-8-powered two-seaters could be viewed as “direct competitors for the enthusiast drivers of the 1980s.”

McCraw’s Vette was “about the nastiest thing you can buy from a domestic manufacturer.” It was equipped with the L82 engine, rated in 1979 at 225 hp at 5,200 rpm and 270 lb-ft of torque at 3,600 rpm; a gymkhana suspension package (bigger front and rear sway bars, “matching springs, shock absorbers, and bushings” and “fat 255-series Aramid-belt tires on one end and a fairly quick 17.6:1 overall steering ratio on the other”); and “every one of the power assists offered.” The fully loaded Vette “flirted with $14,000, even though your basic, strippo Vette lists at $10,515.”

The GMC Diablo that was the Del Calle’s foundation started at $5,089, though when GMC was done with the prototype, the parts added almost doubled its cost to $9,608, still far shy of the gymkhana Corvette but very close to the Vette’s base. Most of those parts improved the truck’s traction: F41 suspension package, 3.23 rearend with limited slip, and then a visit from Herb Adams, “former Pontiac engineer and suspension expert, and builder of some of the prettiest and most improbably racing cars around,” McCraw wrote. Adams refitted the truck with bigger sway bars, a battery relocation kit (from under the hood to behind the driver’s seat) and a swap to GR70-14 Goodyear GT Radials.

“There was no way that the glamorous sport truck was going to be quicker and faster than the Corvette,” said McCraw. The biggest engine you could get in the truck, the 49-state, 350-inch LM1 V-8, was rated at 170 hp and was driven through a three-speed automatic. The best 0-60 time the truck could muster was 9.6 seconds, compared with the Vette’s 7.3 seconds; and the fastest quarter-mile was 17.3 seconds compared to 15.74 seconds for the Vette.

The divide could have been greater, said McCraw, had it not been for the Corvette’s balky four-speed manual transmission. “First and Second gear acceleration was excellent … but the shifter simply wouldn’t allow a clean 2-3 power shift, no matter what technique we attempted. Our loudest criticism to the Corvette group: The shifter in Corvettes hasn’t been right for years, and it still isn’t right.”

Straight-line acceleration aside, the duel at the test track was closer than you might expect. Just a few feet separated the two in braking tests, and the Vette was only about a quarter of a second quicker through the slalom, though “the two vehicles demanded completely different driving styles through the course, the Corvette being steadier and tighter throughout, while the truck, as expected, wagged its tail through the gates.”

Yet by the end of the story, McCraw’s sympathies leaned towards the GMC. He praised it for its utility, flexibility and for its economics, the fact that the pickup was lower priced and—in a reflection of the gas crisis times in which he wrote—would “get about 17 percent greater fuel economy than the L82.”

All true. But GMC built one Diablo Del Calle in 1979, while that model year proved to be a high-watermark for Corvette production, with 53,807 produced. By that yardstick alone, never mind quickness, top speed and fun-to-drive factor, the Vette wins.