This Supercharged Pro Touring 1966 Chevy El Camino Is All That, and More

Rodding at Random: Probability didn’t always work in David Roland’s favor, but when it did, he ended up with a supercharged, 740hp El Camino 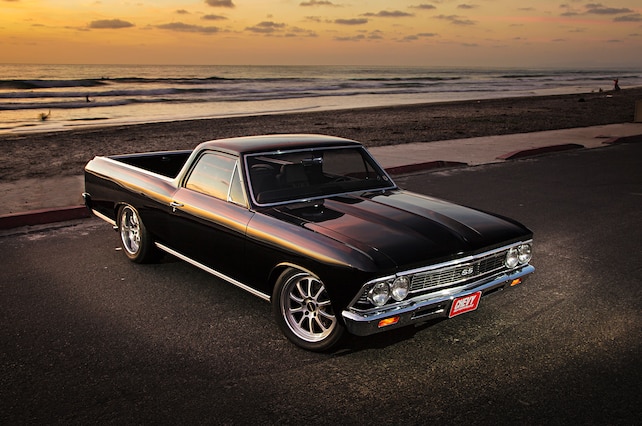 Let’s give a big shout-out to random probability. According to fossil records, Earth experiences mass extinction events every 27 million years or so. Homo sapiens just happened to pop up in between two mass extinction cycles. Lucky us. Within that last 27-million-year window, every couple in every family tree had to, um, get with each other at precisely the right time for any one of us to exist in the first place. Hip-hip hooray for random probability! Unfortunately, probability and timing don’t always yield such favorable outcomes, and no one knows this better than David Roland. All his life, he dreamed of building a kick-ass muscle car, but timing, opportunity, and desire never seemed to converge at precisely the right moment to make it happen. Then one day random probability brought this trifecta of variables together and materialized in the form of a supercharged, 740hp Pro Touring El Camino. Lucky us.

Although David Roland’s desire to build a muscle car always burned intensely from within, timing and opportunity proved more elusive. By junior high school, David was already rebuilding engines, and during high school he worked at a body shop. As a teenager with more passion than money, he had to make do with what he could afford. “I’ve loved cars my entire life, and as kids, my brother and I built several VWs and Porsche 356s,” he recalls. “Most of my friends in high school had Camaros and Mustangs. I worked on VWs and Porsches because they were cheap and plentiful, but I’ve been a Chevy guy at heart all along. I have always liked the smooth, flat lines of the El Camino.”

In a bitter twist of irony, once David had the means to build a muscle car, the timing was all wrong. “During high school, I was broke, and when I went to dental school, I was still broke. Once I finally got out of school, I moved to Hong Kong for the next 20 years,” says David. Not only were American muscle cars hard to find that far east on the globe, the briny ocean air transformed project cars into lumps of rust in no time. Consequently, he had to find other ways to keep himself occupied. “I raced go karts for a while, then I got into planes. Even though I took a long break from building cars, I knew I would get back into the hobby someday.”

That day arrived in 2006, when a five-year search for a muscle car came to an end. “Once I got back to the U.S., I started looking for a project car. I saw this clean, rust-free 1966 El Camino for sale at a swap meet, so I had to buy it,” David recounts. “It had a 350 crate engine and stock suspension in it, and I drove it around for the next year to get a feel for what areas of the car needed improvement. The car drove OK, but it didn’t corner very well and the brakes were terrible. When the front brakes started leaking, I took off the front wheels to figure out what was going on, then decided to do a disc brake swap. Since the wheels were off already, I figured that I might as well upgrade the suspension. Within a few hours, I removed the entire front clip; and within a week, I had basically dismantled the entire car. The body was off of the frame, and before I knew it, I had a full-blown restoration underway.”

For nearly three decades, David dreamed of dropping the hammer with a supercharged lump under the hood. He didn’t see much sense in building a Gen I small-block from the ground up, so he called Turn Key Engine Supply and put in an order for a supercharged LS2. As the beastly 740-horsepower small-block was coming together, David took a trip out to Global West Suspension to address the El Camino’s handling deficiencies. “Global West wasn’t too far from my office, so I took a drive out there to talk to owner Doug Norrdin,” says David. “I explained that I wanted a car that cornered well but still had a nice ride quality, and he recommended a suspension package that included new control arms, spindles, sway bars, springs, and shocks.”

After boxing in the factory framerails, smoothing out the firewall, and installing the new suspension hardware, David dropped in the fresh supercharged LS2 and matched it up with a Tremec TKO 600 five-speed trans. As the restoration progressed, it seemed like timing, opportunity, and desire had finally converged at precisely the right moment. Then all hell broke loose. “In 2007, I opened up the garage and gave a heavy sigh of relief. A series of wildfires had just rocked the San Diego area, and instead of finding a huge chunk of melted metal, my car was still sitting there just as I had left it,” David vividly remembers. “The fire came so close, in fact, that my neighbor lost seven of his classic cars. With a renewed sense of optimism, I began to really get things in motion. After finishing up most of the mechanical work in my garage, I dropped the car off at Best of Show Coach Works for paint and final assembly. Then in January of 2012, I finally got to hear the LS2 come to life for the first time.”

Maybe something beyond explanation spared the El Camino a hellish demise that day. Maybe it was just random probability. Whatever the reason, the opportunity to build an El Camino presented itself at just the right time to help fulfill David’s lifelong desire to drop the hammer in a kick-ass muscle car. Seems kind of random, doesn’t it?

After he found out his first El Camino was going to be a nightmare, Erich Monteith found and purchased a second 1966 Chevy El Camino and was ready to enjoy it. - Super Chevy Magazine

Read about how to install Billet Hood Hinges as they get installed on a 1966 Chevrolet El Camino only at www.chevyhiperformance.com, the official website for Chevy High Performance Magazine!

Our 1966 Chevy El Camino gets some much need body work. The guys at Rubio's Autobody went to work fixing every panel and installing a new hood from Original Parts Group. Only at www.chevyhiperformance.com, the official site for Chevy High Performance Magazine

Follow along as we test fit a Big Block with a Turbo 400 transmission combo in our 1966 Chevy El Camino project car, only at Chevy High Performance Magazine.