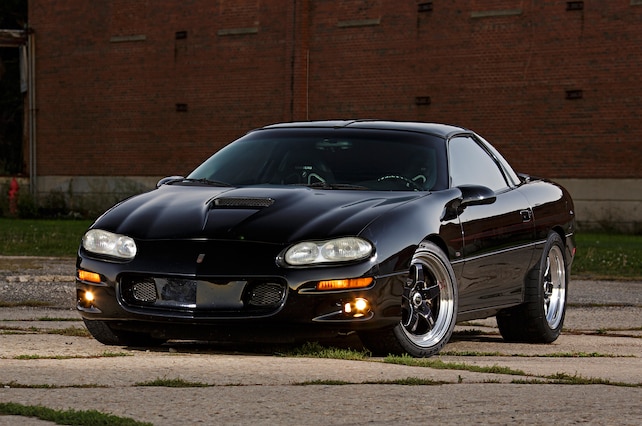 What came first, the song or the car?

There’s no doubt it was the song, but what an influence Ram Jam’s 1977 version of “Black Betty” had on us while we were starting to build our 2001 Camaro Z28. The raw sound of two Les Paul guitars scorching through Marshall amps just knocked our senses into overdrive—it put us on a mission.

“Whaddya say we build the baddest street-driven fourth-gen Camaro ever!”

Those were the words uttered when Rupp (Steven) and myself were on staff of the now-defunct Camaro Performers magazine (RIP). While discussing what the next project for the magazine should be, we wanted to keep it somewhat on the budget side—something that just about anyone could build with a little bit of extra scratch. Keep in mind that Steven had already done a 1968 Camaro (Bad Penny) and my 1971 Camaro (Orange Krate) was in the works, so we figured it was time to do something a bit more wallet friendly. The idea of finding a fourth-gen for under 8k sounded appealing.

Our search was short and sweet when Rupp came across a black, 110,000-mile 2001 Z28 on Craigslist for $7,800. I really didn’t want a black car due to my lack of enthusiasm toward keeping things clean, but the car was in great condition, so we just went with it. Besides, the song “Black Betty” was ruling the radio airwaves at the time, so choosing a name for the project was pretty much a given.

Once the car was in our hands, we laid out a basic plan of what we wanted to do with it. It came down to building a killer street machine that we could autocross, road race, and drag race. Oh yeah, and it had to be a daily driver, too.

The 110,000-mile LS1 didn’t bother us as we had plans to upgrade the mill, anyway. So we headed over to Don Lee Auto in Rancho Cucamonga, California, where Tim Lee and the crew freshened up the LS1 with better heads, a healthier cam, and shorty headers, which was just about all we could do and still pass the stringent CARB (California Air Research Board) smog laws. That little upgrade was fun for a few minutes, but we realized early on our quest for more power could only be satisfied with more cubic inches. The obvious choice was an LS3, so we got in touch with the folks at Chevrolet Performance and had them send over a crate engine conservatively rated at 430 hp. While putting an LS3 in a 2001 Camaro is pushing the limits from a CARB-legal standpoint (really, it’s not legal), it actually runs way cleaner than the LS1, so our horsepower-hungry conscious was clear since we were doing less harm to the environment by installing a later-model engine. We aren’t “tree huggers,” but if the side benefit is putting out less harmful emissions than the LS1, that’s even better.

At first, we kept the LS3 mostly stock with just a slightly more aggressive cam, Granatelli 85mm MAF sensor, JBA CARB-legal shorty headers, and a Stainless Works chambered exhaust. That round of upgrades got us to 407 hp and 420 lb-ft to the tires. Again, we had fun for a while, but we wanted more. Sound familiar? With the engine still wisping out harmful emission numbers well below CARB’s regulations, we figured to keep it that way and give nitrous a shot—a little more fire to the tires.

So we bolted in a ZEX Perimeter Plate nitrous system that got us to 511 hp and 576 lb-ft of torque to the tires. Now we’re talking. That was fine for a few months until we were on the dyno at Westech Performance in Mira Loma, California, dialing in a tune and trying to find more horsepower when the engine went lean due to a pinhole in the stock fuel pump hose. With a “nicked” piston and a bruised ego, we did what any hot rodder in his right mind would do: We took it apart and stroked it!

Back at Don Lee Auto, we showed up with the block bored out to 4.070 inches and installed a 4.000-inch stroke Lunati crank and hung a set of Lunati H-beam rods topped with 11:1 Mahle PowerPak slugs, which gave us 40 more glorious inches of displacement. We stabbed in a mild Comp roller cam that came in at 227/238-degree duration at 0.050, 0.583/0.600-inch lift, and 112 LSA. We finished off the valvetrain with Lunati lifters, rockers, pushrods, and valvesprings, and then topped the ensemble with GM L92 heads. Not wanting to leave horsepower on the table, we bolted in a set of JBA long-tubes—a move worth about 40 horsepower! With a new Aeromotive Stealth 340 fuel pump and FAST 50 lb/hr injectors ensuring plenty of swill, we were making a consistent 496 hp and 488 lb-ft of torque to the tires. Good times!

With plenty of smile-inducing horsepower at the ready, a Centerforce twin-disc clutch was the choice to take the abuse of aggressive gear changes, while a Moser 12-bolt rearend armed with 3.73 cogs and 35-spline axles offered us a bulletproof enabler for high-rpm launches.

With the power and handling dialed in, we punched up the exterior scene with some subtle graphics. Tavis Highlander (tavishighlander.com) designed the stripes and the crew at Aggressive Designs (City of Industry, California) tidied up the stock finish with Transtar Black pigment then applied the gray side stripe and blood-red pinstripe to give Betty some one-off personality. Shaun Dove at Evod Industries took Tavis’ logo design and whittled up the “Black Betty” side and rear badges. We felt an SS hood and rear spoiler would give off a skosh more ’tude. Mission accomplished.

Knowing the car would see an insane amount of track time; we hit the aftermarket for some serious stoppers. In went a set of Wilwood 14-inch rotors and six-piston Superlite binders up front and 12.88-inch rotors and four-piston calipers out back. For street situations, Weld Racing RT-S S71 wheels reside on all four corners (18x9 up front and 18x10 out back) wrapped in Falken Azenis RT615K rubber (275/35 front, 295/40 rear). On drag days the setup changes to 5-inch wide Weld wheels up front wrapped in Racemaster rubber, while a pair of Mickey Thompson drag radials provide straight-line attack out back.

The interior reflects a mildly upgraded performance scene touched off by the A-pillar gauge pod, which houses a trio of Auto Meter informants and an LED shift light from Summit Racing. A B&M shifter manages gear changes to the beefed-up Tremec T-56 trans. The red button on the white Hurst shifter ball sets the TCI F-body Roll Stop—more commonly known as “the burnout button.” A Skip 5-6 ensures Second-to-Third gear shifting stays precise. Corbeau CR1 seats contribute to the performance theme, while a duo of Corbeau five-point racing harnesses are secured to a Gen 4 Racing harness bar.

With our focus on performance, the stock sound system remained intact—cracked door speaker and all. Apparently, we just got used to the distorted bass being drowned out by the sound of the barely muffled exhaust.

While our goal of building the baddest fourth-gen ever to hit the streets is up for discussion, there’s no debating that we did build a competitive street car that doesn’t necessarily do one thing great, but in fact, does a number of things really well. It has great street manners, kicks ass on any autocross or road course, and with the influence of a crafty driver and a set of drag radials, it can get down a dragstrip in a tick over 11 seconds.

If we had the chance to do it all again, I’m afraid we’d go down the same path of performance and suspension.

Yes, this 2001 Camaro is one kick-ass fourth-gen, but we just can’t seem to get that damn song out of our head—distorted door speaker and all. “Whoa, Black Betty, bam-ba-lam!”

There it is again…

Learn two ways to keep your LS engine from going lean and get the update on our Project Black Betty, a 2001 Chevrolet Camaro Z28.