This 1,500-Horsepower 1972 Chevrolet Nova Will Knock Your Socks Off 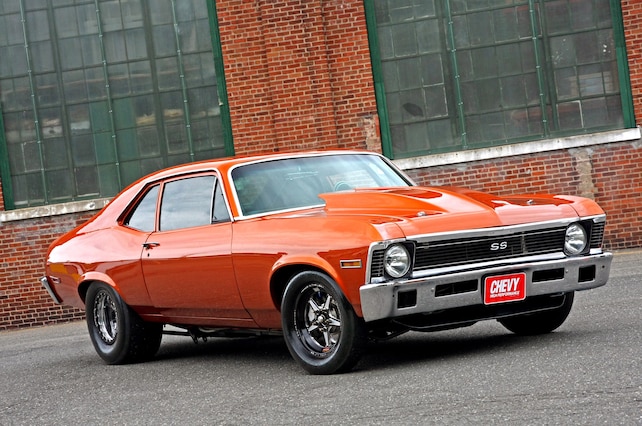 “We wanted to build a really fast car that we could drive anywhere on the street,” Matt Meissner told us. The “we” is Matt and his twin brother Kevin; 26-year-olds who were exposed to the hot car aberration when they were 12. Their father would take them to the shows in his unlikely 1956 Buick Special. Let’s say that the attraction never faded.

OK. These guys weren’t rookies. By the time they touched the curling remnants of this 1972 Nova SS, they’d already been through some hardware. They knew the drill. What did they mean by “a really fast car?” The thought of power in the hundreds didn’t move ’em. No. They were thinking like a lot more than a thousand the hard way; by a badass small-block harboring a badass belt-driven compressor. More on this later.

These lads had just offed their latest rant, which was some kind of Mustang, and had eyes peeled for the next diversion. They found it just across the border in upstate New York, claiming a patch of weeds behind an old gas station. It was stripped-out blue with a tarpaper roof. “Turns out the car was a real SS. We had to have it,” said Matt. “We spent the next three years building it through several different stages and engine combinations.”

As to the most challenging part of the undertaking, Matt confirmed that building the streetable 1,500hp small-block was at the top of their list and that being employed at Ceralli Competition Engines (Paterson, New Jersey) made it easy for him to keep an eye on the project. The brothers’ 414 is prolific. At just 4,700 rpm, it produces 730.2 hp and 816 lb-ft of torque—and that grunt stays pretty flat from 5,000 to 7,200 rpm—we think more than enough to lift the wheels way up and smoke the tires for about a quarter of a mile. Final dyno proofing at Fonse Performance in Sicklerville, New Jersey, revealed 1,520 hp at 7,700 rpm and 1,063 lb-ft at 7,100 rpm. Alrighty then!

Down in the heart of Paterson, engine man Bill Ceralli did the machine work and the balancing. Matt and Kevin did the building, outfitting a high-zoot Callies crankshaft, steel connecting rods, and Diamond pistons with a Dart Iron Eagle cylinder case. Ceralli’s own Revolution 23 aluminum castings are on top, bridged with a Super Victor 2 intake manifold. The terrible twins got Anthony at 16w Fabworks in Clifton, New Jersey, to build the engine plumbing (hot side blower; cool side intake) for the ProCharger and ran those fat tubes through the cockpit race car-like to the space behind the seats where they intersect the intercooler.

To disseminate this considerable output, the Meissners went with a fluid coupling, a Powerglide built by Steve’s Transmissions (Stillwater, New Jersey) that includes a hefty Reid case, a 9-inch converter with a wicked 6,200-stall, a full manual valvebody, and a transbrake. A 3.70:1 gearset spins the spool and the 40-spline axleshafts inside the Moser axle. Getting a bite with the M/T Pro Bracket radials is easy with the Calvert springs and CalTracs bars. Since the 15-inch diameter race wheels can’t accommodate big stoppers, the boys posted an 11-inch Stainless Steel Brakes Corporation rotor and four-pot caliper at each wheel.

When asked what they would do differently had they to do it all over again, Kevin said without hesitation, “we’d build it lighter.” The Meissners selected suspension components for their lightweight and established quality—Smith Racecraft upper and lower control arms capture the Moroso drag springs and AFCO dampers work within. A Racecraft rack steering unit replaces the bulky, heavier recirculating ball.

Remember that bit about the car being little more than a scabby shell when they found it lurking behind the abandoned gas station? They could have relieved some of the heft with some fiberglass/carbon construction, but now the only thing that isn’t steel is the 4-inch Glasstek hood. Matt and Kevin got on it, doing the smoothing and blocking the bodywork until it came out clean and without a ripple. They didn’t remove anything. They worked with what they had. They got an enviously clean envelope on which to apply paint so incendiary that it would burn into people’s brains. They dragged the Nova to Martens Body & Fender just down the path in Glen Rock, and Martens bombed the crap outta that baby with Sikkens Atomic Orange. To define the work a tad better and put some sparkle to the overall package, the brothers put Auto Metal Direct glass in every port.

Though the drag racer part of the Nova is obvious, the brothers well-managed to include a proper interior treatment: no bare metal, real seats, full upholstery throughout. It all looks copasetic, almost stock except for the pesky intercooler ducting and that 10-point rollcage. Aside from the Auto Meter gauges, the Grant Challenger GT steering wheel, the B&M ratchet, the Procar Sportsman seats, and the five-point RJS Racing straps, there’s little left to the imagination. There’s no audio, no cool air option, no Navi, no cup holders. This is about stinging, sweaty, adrenaline-spiked lunacy and putting the pedal down on 1,500 freakin’ high-rpm horsepower. Hmmm, how long could you hold that thing flat to the floor? The upside is that if you didn’t, you’d see more than 18 mpg on the highway.

So all youse can just forget about it—this Rottweiler ain’t gonna blink.