Eye For Design: An eye-catching C5 Z06 that’s been tearing up the USCA 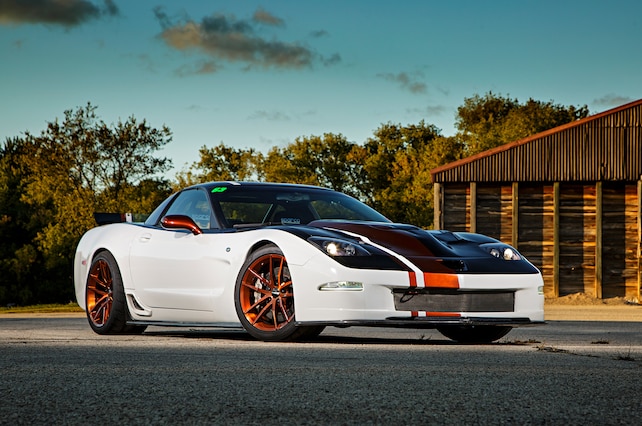 If you have been to a few Ultimate Street Car Association (USCA) events, or own a TV then you might have seen Randy Johnson’s 2002 Corvette Z06. It gets around. The owner of D&Z Customs has been responsible for quite a few award-winning Pro Touring classic Chevys, but he quickly found out, like many in the USCA series, that the C5 Z06 was a home run of performance and affordability. Instead of dropping over six-figures into making a one-of-a-kind classic perform like a late-model, the C5 Z06 allows you to select from a host of readily available upgrades to the stock architecture and compete instantly. But how do you separate yourself from the dozens of other late-model Corvettes at these events?

Randy’s answer was to build something truly unique, which has managed to capture first place in design at every event it has been to. “Being a car builder, having artistic vision inside you, you want to make it that much different. I was happy with the results, but you are always curious how it will be taken or perceived by other people. Sometimes what I think is cool everybody else doesn’t.” When you look throughout the build, it is clear that Randy has extreme attention to detail. He had his hands on every part. Even the exhaust system is completely custom. “We powdercoated the valve covers and shifter knob to match the wheels. I wanted to bring the colors all the way through the car. The engine, tranny and torque tube are gunmetal gray. The cradles are satin black. I painted all the suspension. I like that kind of stuff. I don’t care if anybody else sees it, I know it’s there and I am content now.”

The build started with about as blank a canvas as you can get. “A friend of mine had it. The car was a theft recovery—no motor, brakes, seats.” Randy said he got it at a “good price,” which was helpful given how much time and money was about to go into it. The unique look, which confuses some—not sure if it is a C5, C6 or all of the above—began with Extreme Dimensions front and rear bumpers along with Lewis 5 Motorsports fenders and quarter-panels that have all been heavily worked. “The only panels not touched were the roof, doors and trunk lid. Those are factory. The front fenders are 3/4-inch wider, and 1 1/4-inch in the rear. The 2-inch [panel] was way too wide and would hurt the lines of the car. I wanted to keep the Coke bottle shape. There was a body line over the wheelwell opening, and it didn’t make sense to me, so I smoothed it out.” The front directional lights are narrower, the third brake light has been removed, and the fixed headlights are from Radio Flyer Innovations. The hood is carbon fiber, straight from Carbon Concepts. The spoiler was completely made in-house, inspired by the C7 Z06’s Z07 package. Randy used Lexan for the center section, which is supported extensively by aluminum and fiberglass. By building up the underside of the rear, it is able to handle the downforce generated from the 5-inch tall spoiler. At long last, all of this work was covered with a combination of PPG Speedway White, Black, and a custom copper candy. He credits painter Mark Klos at D&Z for doing such an amazing job.

Form and function combine at the rolling stock. The copper color carries over to the wheels, which are Forgeline AR1. Measuring 18x11 front and 19x12 rear, these are no pizza cutters. The Forgelines wear meaty 295/35/18 and 335/30/19 Nitto NT05 rubber. Under those candy-colored wheels lie Wilwood six-piston binders and 14-inch rotors up front, four-pistons and 13-inch rotors out back. The hidden RideTech triple-adjustable coilovers, splined sway bars, CMP tie rods, and Delrin bushings are pure function, however. These items Randy continues to refine as he gets more seat time. Getting the alignment right, he says, is crucial. “I am still tweaking the rebound and compression, always messing with the brake pads. At one place you want a more aggressive pad, and less at another. I’ve changed the spring rates a few times to see what it likes. It’s maybe 700-pound front and 600-pound rear now.”

Speaking of function, Brian Thomson at Lingenfelter built a stout LS7 with a Callies crankshaft, Molnar connecting rods and JE pistons. The 11.5:1-compression engine has a slightly larger 4.130-inch bore and 4.000-inch stroke. Lingenfelter’s GT-19 camshaft and stock rockers with trunnion upgrades command the LS7 heads. The LS7 uses a stock oil pan with Aviaid baffle and Peterson Fluid Systems oil tank that holds 14 quarts of oil. Randy said he chose to stick with the stock pump and pan because he wanted to keep the A/C. After all, it is a street car, right? A stock LS7 intake manifold, throttle body, and Halltech Killer Bee II air intake top off the engine, which makes 630 hp and 580 lb-ft of torque.

Given the car’s future on the road course, autocross and street, heat was a big concern. The hefty oiling system was meant to keep temperatures down, as well as keep the bearings happy, and a DeWitts radiator was added with similar intentions. Switching from a bottom-feeding radiator to a front-feed also helped. “Having that Ram Air through the front, it has no issues with temperature. The car can run as long as I want to out there.” Kooks stainless steel 1 7/8-inch long-tube headers were treated to some titanium heat wrap, too. “In my experience, the engine bay builds a ton of heat, and I wanted to keep the temps down and thought it looked killer.”

To handle the added power of this new powerplant, Randy looked to the C6 for upgrades. “The transmission and diff is all C6 Z06 stuff. A buddy was selling a C6 cradle and rear diff, and I’ve been working closely with Tremec for so many years. They had a TR-6060 trans from a Z06 in the warehouse.” It all came together with a set of billet aluminum offset mounts from RKT Performance with urethane bushings to match the C6’s cradle to the C5 frame. The C5 torque tube, halfshafts (G-Force upgrades) and hubs were maintained albeit with SKF bearings. For its intended abuse—I mean use—Randy called Centerforce for an upgraded clutch and B&M for a shifter to complete the drivetrain.

The interior was certainly not overlooked in the shuffle, as Randy put a good deal of time into a custom rollbar. His buddy Nick Gaylord at Topline Design & Speed helped complete it after Randy’s tubing bender broke right in the middle of the project. Randy chose to do this himself because he would not be able to get the fitment he wanted otherwise. The finished product ties into the frame and stays tight to the B-pillar and roofline. Prior to the final welds the bars were painted to match the exterior. “I welded it in while trying to control the heat. We wound up having to go back and spray it. We managed to blend the candy paint from where I messed it up with the heat.” A set of RideTech/Crow harnesses, Sparco seats, quick-release steering wheel and color-matched shift knob finish off the racy interior.

What’s next? Randy says he plans on keeping the C5 and using it, of course. He knows this isn’t the type of build where you might get the money back that you put into it, but he didn’t build it just to sell it. “It is unique enough to keep me happy. Nobody else will have one like it when I show up to an event.” No kidding.

We decided to make the move and install 50-state emissions-compliant shorty headers from JBA Headers onto Project Twitch, our 2002 Corvette C5 Z06.

In this month's Technically Speaking a reader's 1985 Chevrolet Corvette is running rich. We explain the Field Service Mode that provides additional information.

This 2002 Corvette Z06 is quite possibly the loudest LSX Drag Radial car ever built, and once the 427 cubic-inch LSX engine fires up and the fender well mounted headers start screaming, you can pretty much forget about talking within a two-mile radius of this beast.

If you could have changed one feature on the fifth-generation Corvette Z06, what would you have done? How about a convertible version, like Anthony Graziano’s 2002 Caravaggio Corvette Z06 Convertible?

Regardless of the powerplant you're into, a good exhaust system will do a number of things. This is why we swapped out the exhaust in our '02 C5 Z06 Corvette with a new Borla Cat Back Exhaust system. - Chevy High Performance Magazine

This wide-body 2002 Z06 Corvette packs an awesome 590rwhp punch.We look over the finer points of Corry Tsang's Z06. Click here for more details or check out the September 2012 issue of Vette Magazine.