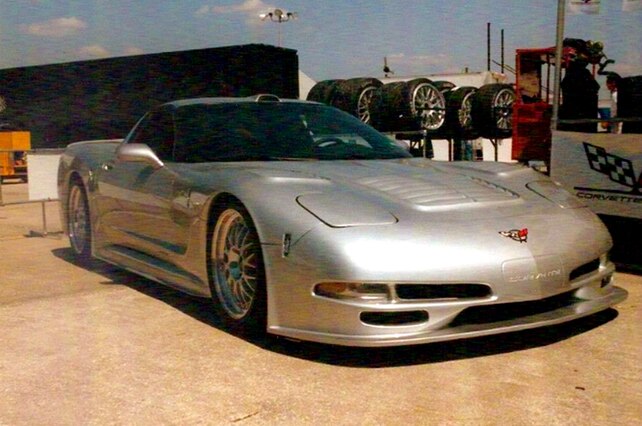 Automotive journalists are well known for their enthusiasm. Sometimes elements come together and the conclusion looks like a no-brainer. The Corvette Racing team and the C5-R made their debut at the 1999 24 Hours of Daytona, but initial development work started on the C5-R shortly after the 1997 C5 was released. Chevrolet engineers and Pratt & Miller knew that it would take at least two years to sort out an all-new GTS racer. A stock 1997 Corvette coupe was delivered to Pratt & Miller where the car was disassembled and rebuilt as an all-out race car.

The 1997-based C5-R, the first development car, would eventually be used as the homologation car. These are also called “template cars.” This was no stock ’97 Corvette wearing a C5-R widebody suit and racing wheels. This was a purpose-built race car (albeit a preliminary one) with an all-out racing version of the stock LS1 engine, racing suspension, brakes, rollcage, gutted interior, and carbon-fiber widebody outfit. The wheelbase grew 0.2 inches to 104.7 inches, the car’s length was 182.8 inches—3.1 inches longer than stock, the width was 2.8 inches wider than stock at 45.8 inches, and lastly the car was 2 inches lower than stock, measuring just 45.8 inches tall.

After the basic platform was sorted out with the development C5-Rs, the real C5-R race cars were built. The C5-Rs were badass-looking race cars. Corvettes had long since been bottom air-feeders, so the center section below the front bumper was completely open with splitters on the right and left front corners. Small-diameter fixed headlights with covers replaced the stock pop-up units. The hood had seven vents to exit radiator hot air and the tops of the front fenders were vented. The side rockers were extended to cover the side-mounted exhaust and there was a massive rear wing.

After all the paperwork was completed Pratt & Miller entered the C5-Rs into five races for the 1999 season, starting with the 1999 24 Hours of Daytona, then Sebring, Road Atlanta, Laguna Seca and Las Vegas. The two-car team took 2nd place at Daytona and Laguna Seca, and 3rd at Las Vegas. This was a very good start for a totally new car and team.

As the 1999 racing season unfolded Corvette watchers began to notice the former development C5-Rs that were now being used as show cars. The 1997-based homologation car was painted silver and looked like a tricked out escapee from a road course. By early 2000, when rumors began to heat up about a new performance model Corvette, enthusiastic writers at Motor Trend connected the dots between the C5-R show cars and the upcoming 2001 Z06. In hindsight, it wasn’t a stretch to look at the silver C5-R homologation car and imagine a Z06 badge on the front fender.

Sometimes Chevrolet’s modus operandi of “Evolution, not Revolution” drives fans nuts. As cool as the production Z06 was, compared to a Corvette with the full C5-R widebody regalia, it’s rather tame. The Motor Trend guys reported that a C5-R-based street Super Vette was being given “serious consideration” for production. Of course, we’ll never know if that consideration lasted months or minutes. However, when you look at the silver C5-R homologation car, it indeed looks like, “Chevy COULD do this!” Especially when you look at the extensive aero package offered on the C7 Z06/Z07. Motor Trend’s wish list also included an updated version of the C4 ZR-1’s LT5 DOHC engine. Now that would have been smokin! They also speculated that the C5 Super Vette would be a 2003 50th Anniversary car. Again, a very cool notion, but never came close to reality.

I found a little piece of insight in Phil Burg’s 2004 book, Corvette C6. While explaining the design process of the C6, former Corvette Chief Engineer Dave Hill explained that two years after the introduction of the C5, designers were already coming up with things they wanted to do to the C5 that necessitated and justified a new Corvette platform—the C6. So, with the designers focused on the next generation Corvette, no one was championing a C5 Z06 wearing a C5-R suit of armor. What amazes me is how tuners and builders did not take advantage of Chevrolet’s decision to factory-back a Corvette racing team by emulating the C5-Rs for street use.

While the C5-R development Corvettes were not purpose-built concept, engineering, or show car Corvettes (like the Stingray III and Tiger Shark), they made it out the door and beyond the racetrack as Corvette show cars. The silver homologation C5-R was updated with the real race car’s extractor hood and for a time was on loan to the National Corvette Museum. There were several development C5-Rs, with the exact number not well known, after all, they were just a means to an end—building competitive race cars. According to Corvette Racing historian David Palmeter several of the development cars were later used as show cars, and at least one was made into a C6.R show car. However, the silver C5-R show car (the homologation car) that was at the National Corvette Museum for a time now resides at the GM Heritage Center in Sterling Heights, Michigan.

Restoring the worn seat track and weatherstrip for the C5 Corvette will enhance your driving and ownership experience.

In this feature article CORVETTE FEVER takes a look at Dave Barkus' drop-top 2000 Chevrolet Corvette, which has been converted to a C5 Z06 convertible powered by a supercharged LS1 engine - Corvette Fever Magazine

» Read More
2000 Chevrolet Corvette - The End Of The Road

In this feature article CORVETTE FEVER says goodbye to Project C5X, and we look back over how our 2000 Chevrolet Corvette has progressed during the series - Corvette Fever Magazine

In this tech article CORVETTE FEVER shows you how to replace the engine drive belt, tensioner, and idler pulley on your 1997-2004 Chevrolet Corvette's LS1 engine - Corvette Fever Magazine