Something Different: TMI Products’ 1972 Nova is a unique ride showcasing some of the company’s newest offerings 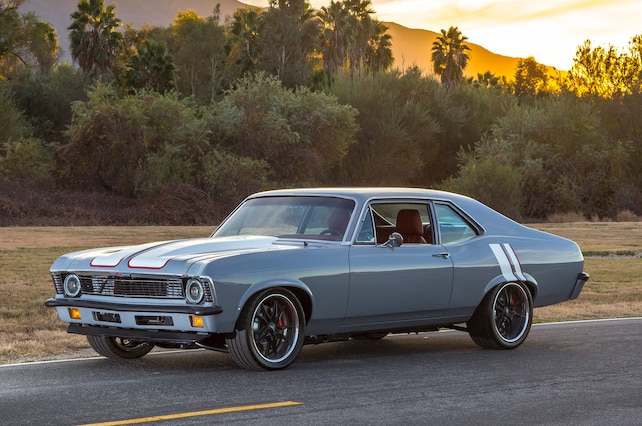 In business for 33 years, there are a number of cars that have graced the pages of magazines with interiors from TMI Products, but what you see on these pages is a first, as TMI has only recently started producing products for the Chevy Nova. Debuting at the 2014 SEMA Show in Las Vegas, the TMI 1972 Chevrolet Nova was a first for the company in a number of ways—both as a newly supported platform and carrying a completely new line of their products. “When we debuted the Nova at SEMA 2014, we were known for Camaros, Mustangs, and Chevelles,” explained Larry Ashley, Marketing Director of TMI Products. “We wanted to get into the growing segment of Nova owners, and decided to do it in a big way.”

Once the team decided to get into the Nova market, step one was to locate a car to use not only as a test mule, but also to act as a showpiece for the company. Luckily, a 1972 Nova was right around the corner, literally. “One of the owners of the company had a neighbor with the car in the driveway, that had been just sitting and sitting for years. The car was pretty beat down when we got it,” laughed Ashley. With the serendipitous Nova acquired, it was sent off to JH Restorations & Customs in Riverside, California, to transform the car from a basket case to a SEMA-quality showpiece.

After six months of hard work, TMI’s Nova emerged a totally different vehicle than what had rolled in. The whole body was straightened and smoothed, with Ground Up supplying all of the chrome restoration parts on the build. The front and rear bumpers have been sectioned and pulled in, giving the car a unique, shorter look. A Dynacorn 2-inch cowl hood was sourced and Johnny’s Auto Color and Body Werx sprayed on some PPG Scion Cement Gray paint. Under the hood, the TMI crew opted for easy power, dropping in a GM 350-cube crate engine topped off with an Edelbrock 650 carb and an AFE air cleaner. Champion Radiators supplied the aluminum four-core radiator and Eddie Motorsports provided the alternator and polished serpentine kit, while spark is handled by PerTronix ignition components. Getting the spent gasses out into the atmosphere is a set of Doug’s headers feeding into a Flowmaster dual-chamber 2.5-inch-diameter exhaust. Power goes back through a Bowtie Overdrive High Performance Street model 700-R4 with a Bowtie Overdrive 1,800-stall converter. From there power goes back to a 10-bolt rearend built by DiffWorks with 3.73 gears and a limited-slip differential. SSBC brakes front and rear rein in the Nova, while Viking adjustable coilovers with SSBC 2-inch drop spindles and Church Boys Racing tubular control arms handle the suspension duties. Budnik G10 wheels measuring 18x7 in the front and 18x9 in the rear are wrapped in Mickey Thompson rubber measuring 245/40 in the front and 265/35 in the rear.

Inside the cabin is where this car really shines. Starting with a re-covered OEM dash, TMI opted for some fancy digital gauges from Dakota Digital and a sound system from Custom Auto Sound. A Classic Auto Air air-conditioning system handles the California summers and Quiet Ride Solutions was tapped for the insulation. The front seats are TMI’s Pro-Series low-back seats with headrests in Merlot with Charcoal inserts. The door panels are TMI Sport XR panels with a TMI Center Console. The rear seats are again, TMI Sport series kit, which used the stock frame, but not much else. “The [front] seats that we used in this project actually debuted in that car,” explained Ashley. “It is a full replacement seat, bolt it in and go. We’ve always been known as the upholstery kit guys, but now we offer a complete replacement seat. Not only is it a direct bolt-in seat, but it also has recline built-in, and adds 3 inches of rearward adjustment—something the OEM seats were severely lacking.” In addition to the brand-new front seats, TMI addressed the rear seat, taking a concept usually reserved for really high-end custom upholstery shops, and packaging it into a DIY kit. “In the back, we have our rear sport seats. Basically, you take your stock frame, cut the stock springs out of it and use the foam and upholstery kit with the frame. It becomes like two buckets, with a waterfall console in the middle,” Ashley explained. “Really, the rear kit allows someone to do what used to be a pretty custom job themselves. The car also features a molded-in headliner for more headroom and a one-piece look.”

Ashley was quick to note that while the final product was far beyond their expectations, that the process wasn’t without its quirks. “It was odd. Some simple things that should have been easy proved to be difficult—like shaving the lock from the trunk. After some head scratching, we had to turn the mechanism upside down to get it to work with the popper,” he said, chuckling. “And we are still getting sand out of the car from sandblasting. We thought we got it all before we reassembled, but it’s still coming out of all sorts of places at odd times.”

As the car was designed to be a SEMA car—it excelled in that task—we couldn’t help but wonder what was next for the Nova. “It mainly stays in our showroom now, but we do take it to local shows now and then,” related Ashley. “We haven’t done any track driving with it yet, but we’re planning to. One of the big reasons we haven’t done it yet, is because we didn’t want anything to happen to the car before we got all of our photos done. With that done, we’ll probably run some autocross with the car to start and see where it goes from there.” We’re happy to hear that, a car as nice as TMI’s Nova will get to stretch its legs and be appreciated out in public.