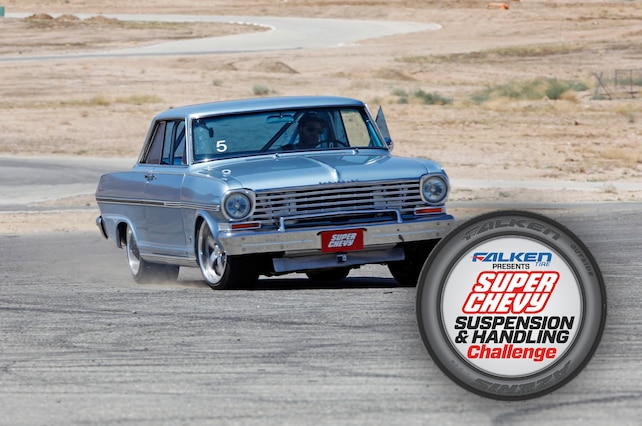 When the team from Total Cost Involved (TCI) showed up at the Streets of Willow Springs Raceway for the 2015 Super Chevy Suspension & Handling Challenge, presented by Falken Tires, they told us their light-blue 1963 Nova was nicknamed Little Sweetie. But, when the Caldwell’s Performance-built 427-inch small-block fired up for its first on-track stint, it sounded downright wicked.

Before we dive into the car’s full armament of suspension parts, it’s necessary to touch on the rich, sentimental backstory and life of the car.

“Back in the day, me and my dad were building sister cars,” said the car’s owner and TCI employee Evan Dalley. “Both of our cars were here at the shop and TCI prototyped the first four-link on Dad’s Nova.”

While the car was in TCI’s shop, things took an unfortunate turn and Evan’s dad was diagnosed with stage-four lung cancer. He was given only a few short months.

Evan took one look at the Nova up on the lift and knew it just couldn’t be finished on his dad’s forced timeline. “That car needed so much work,” said Dalley. Rather than give up on building the Nova his dad had always wanted, Evan brought home a new Nova that was closer to completion.

They stripped down the old car and transferred all the parts to the new one, which already had a paintjob. Elegance Auto Trim did a quickie stock interior on the car, and a disc brake kit was added to the otherwise stock front end. In a month, the car was presented to Evan’s dad for his birthday. “Dad drove the car everywhere and would pick my kids up from school in it. That’s where the Little Sweetie nickname came from. It was just a nice, little cruiser with a 250ci six-cylinder in it. I added a 700-R4 transmission and a station wagon rearend in it with a 3.30 gear and the thing went everywhere, great.”

Evan’s dad ended up persevering for another 2-and-a-half years, enjoying the Nova the whole time, before the inevitable happened.

“When he passed, I got the car back and just stored it for a while, then I pulled it out and started driving it again,” said Dalley. It was 8 years later that the Nova underwent the radical transformation into the barnstorming autocrosser you see before you.

The Nova is now armed to the teeth with TCI’s latest and greatest suspension underpinnings, such as their Pro-Touring independent front suspension (IFS) and their Torque Arm rear suspension setup. RideTech three-way adjustable shocks ride on all four corners and big 13-inch Wilwood brakes help rein in the speed.

Power comes by way of an AFR-headed, 427-ci, Dart-based small-block and is sent through a McLeod RSX clutch to a Muncie transmission and a Gear Vendors Overdrive.

And boy, is this car driven. In addition to the track time it garnered at the 2015 Suspension & Handling Challenge, this Nova sees quality competition time at just about any venue that will let Dalley through the gates.

“Oh, I drive the car,” says Dalley. “I go to as many autocross events as I can and I’m not afraid to drive the car on the streets. I’ve been to more events since the Challenge and finally bought a set of better seats!”

Now that we know the story, and what makes it go, it’s time to let our expert ringer, Mary Pozzi, preach the gospel of speed from behind the wheel.

Mary Pozzi From The Driver’s Seat

My trip around Streets wasn’t without some minor ergonomic concerns as the Nova’s interior wasn’t best suited for aggressive track flogging. Sporting a doughy feel in the seat that no amount of harness cinch could eliminate was the first problem, and I found it extremely difficult to position the car on-track while keeping myself solidly planted.

While this limited my testing abilities, it must be recognized that this is a street car, and on a long-distance drive I’d much rather my butt be softly nestled in the foam-lined bucket I had today than in something with a more solid, butt-numbing feel. I know I’m picking nits here but that’s my job!

With limited track laps, I concentrated on what I could glean from each. Seating and harness issues aside, I found the Nova to be pretty close to the other TCI car I absolutely love: their ’68 Camaro I tested several years previous. The ride was compliant yet provided a solid feel, and rolling into a corner brought a bit of lean until the suspension set in. Better seating would give a much sharper, knife-edged feel, and I so wished for this. The steering rack used by TCI has an excellent feel and pressure as it remained light and ready for any change of direction. Power got itself to the ground, and the Nova transitioned gracefully from corner to corner. Like most other TCI cars I’ve tested—and if you ignore the seating—all of the parts worked in synchrony making the Nova quite easy to drive. I never got a chance to really push this car to see how it reacted when stressed, but then I really didn’t want to. The Little Sweetie wasn’t built for that, and who was I to treat her roughly? My cool-down “Road Evaluation” lap was the clincher and this is a car that, in its present form, did not disappoint one bit.

Like with other interviews, I asked Evan what his “one thing” was for this car and his father. Evan thought a minute and then softly replied, “It was the Outriders Picnic and the last outing with my dad. We drove this same Nova and I’ll never forget his enjoyment of that day!”

With a true competition seat, his is a car I’d drive to events, not trailer. And once there (with a good seat, of course), I’d hammer the hell out of it and grin like the proverbial Cheshire Cat. For Evan, this is his family’s “forever car” and will always be the Little Sweetie.

We put the TCI-built Nova through the wringer on the 420-foot slalom course, the Streets of Willow Springs road course and the skidpad. And, because some of those numbers are a little ambiguous for those not familiar with the slalom or road course, we paired the car against a 2015 Camaro SS 1LE for comparison.