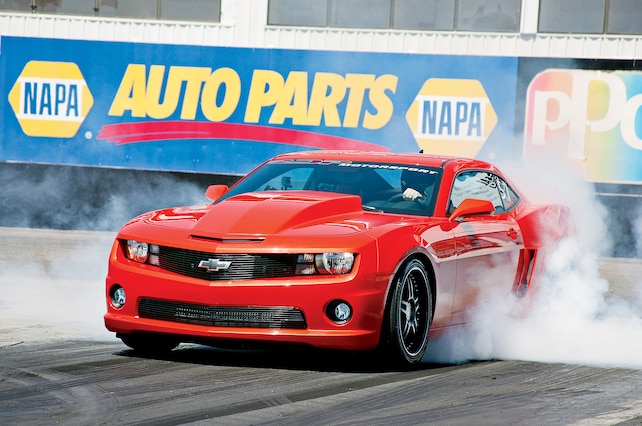 Three weeks before a major car show or event, many people are just putting the finishing touches on their pride and joy. Maybe they are waiting for a bracket or two to arrive from the powdercoater, maybe they have a full day planned at the paint shop, but at three weeks out it’s usually all about the small stuff. For many, there simply isn’t enough time to work a job and perform major modifications on the car. Unless, of course, you happen to be Steven Leerentveld, a workaholic from Perry, Ohio, who happens to consider three weeks more than enough time to build a car from scratch for one of the largest Camaro events in the world. And when we mean from scratch, we mean he didn’t even have the car at the three-week mark. He still had to order it!

Luckily, Steven is a die-hard enthusiast and happens to own RDP Motorsport in Ohio, a company he built from the ground up after moving to the United States from Australia in 2008. Essentially starting over, Steven knew he had to make a splash and when the 2010 Camaro came out, he found the perfect platform with which to do it. So, with just three weeks to go, Steven assembled his crew around the brand-new Inferno Orange 2010 Camaro he has just purchased, laid out the build plan, and got to work.

Under the hood, Steven didn’t have much time to make a ton of changes to support big horsepower, so he left the stock LS3 engine in place and traded the stock camshaft for a custom unit cut to his specifications. Otherwise, RDP left the engine as it came from GM, although they did do some work to the exhaust side to help it make a couple hundred additional ponies. Of course, we’re talking about a turbocharger here, and for that duty the RDP crew turned to Turbonetics, ordering and installing one of the company’s T76-based single turbo systems. With twin wastegates and a single blow-off valve, the Turbonetics kit flows almost 9 psi of air through an air-to-air intercooler and into the stock engine, supplying enough air to lay down 675 rwhp and 692 lb-ft of torque, which he deemed “good enough” for the stock engine.

Supporting that power did take quite a bit of fuel, and the RDP crew had to find time in their three-week dash to install three Aeromotive fuel pumps in a Fore Precision hat along with an Aeromotive fuel pressure regulator and a set of 80-lb/hr injectors stuffed in a set of—you guessed it—Aeromotive fuel rails. Mechanically, the RDP crew had to install a new Fidanza clutch and flywheel, which was housed inside the stock TR-6060 transmission that was snugged to the back of the LS3 block, feeding power to a stock IRS rear upgraded with only a set of The Driveshaft Shop 1,400hp axleshafts. With the clock ticking, the RDP crew left the rest of the drivetrain alone, moving their attention on to the suspension, wheels, and exterior.

“I love a car that looks fast just sitting there,” Steven tells us, so it makes sense that him and the crew spent time working on the Camaro’s stance and wheel combination to get everything just perfect for the show. Those 20-inch black rollers are actually a custom RDP Signature wheel, which come in at 9 inches wide in the front and 11 inches in the rear. Wrapped in Vredestein tires and sitting just under the stock Camaro fenders, the Signature wheels look fantastic, offset perfectly by the Hotchkis lowering springs and sway bars. For the full effect, Steven spent the last of his build budget and time on customizing the exterior of the Camaro, teaming up with Jeff’s Garage in Fairport Harbor, Ohio, to add a custom Pro Stock–inspired hood and wing to the Camaro, which they painted with factory IOM paint to match the stock exterior color. While the crew was at it, Steven also had a larger side air duct added to the rear quarter-panel and a set of billet upper and lower grilles to give the Camaro a menacing, no-nonsense look.

Finally, with the car painted, the wheels installed, the engine and turbo kit ready to rock, and the stance perfected, Steven made time for tuning, getting the car off of his in-house Dyno Dynamics dyno just four hours before he and the crew had to leave for Arizona. “We finished building the car at 1 a.m. on Sunday in Ohio and had to drive to Arizona for the Camaro5 Fest.” If you’re paying attention, you might have noticed that Steven said “drive to Arizona” and, he meant it. With a brand-new, show-quality car, he decided to leave the trailer at the shop and drive his new creation all the way there, a journey that works out to be over 5,500 miles round trip. “It drives like a dream and handles awesome,” notes Steven, going on to tell us that it ran an 11.60-second quarter-mile at 128 mph on a less than stellar 2.4-second 60-foot time on the 20-inch street tires, which proves that this custom Camaro is making some serious power. After the show, Steven drove the car back home, averaging 24 miles per gallon and with a permanent smile on his face.

For many, this journey and insane build might have been the end of the road for a project, a three-week thrash and several years of relaxing to enjoy their new car. Naturally, Steven isn’t one of those people and the next phase of the build was soon underway with a stout 427 being assembled for the Camaro. RDP also planned to add another turbocharger to the package along with a 9-inch rear and a two-speed automatic Powerglide in place of the stock TR-6060 manual transmission. The goal? To “hit the dragstrip with the aim on low 9-second to high 8-second quarter-mile timeslips” while retaining driveability and an awesome exterior appearance. For just anyone, we might be skeptical, but with a builder like Steven and a crew like RDP Motorsport, well, we’ll just have to wait and see what the future holds.