Joe Focarino's 1972 Chevrolet Chevelle is the One that Got Away, Come Home 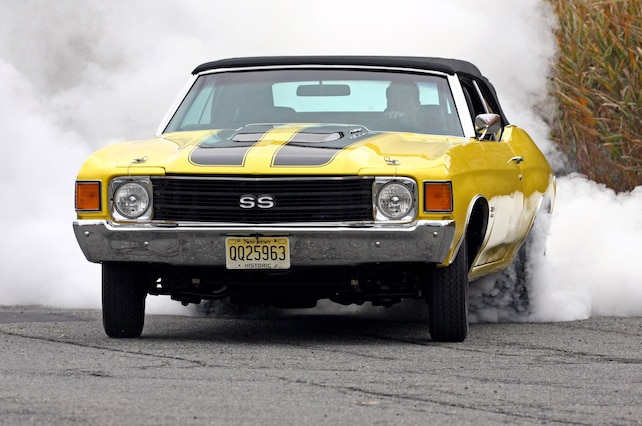 How many of us think back to our first real performance car and wish we still had it? From rebuilding creaky carburetors in shopping mall parking lots and repairing leaky fuel pumps on the side of the highway to the hours and hours spent in the garage dreaming up ways to make them better, a boy’s first muscle car is a rite of passage in the American landscape.

This particular 1972 Chevelle was originally purchased as a gift by Joe Focarino, Sr. for Joe Junior way back in 1988 to be used to fulfill that rite of passage. It was built and assembled by the pair as Junior’s first car. But then, the racing bug bit—and hard—so Junior decided to sell the car.

“I sold it in 1990 when I got my license so I could buy a 1955 Chevy and race it,” says Focarino, Jr. “But I regretted it every day because of the good times and memories I had with my father from the build process.”

Then life took over, and Junior built many more cars in its absence to try to fill the void, along with a marriage to his supportive wife, Dana. Her influence, along with the help of his father, resulted in the Chevelle becoming a part of his life once more.

“We found the car again in 1999 through extensive searches, struck a deal, and bought it back,” he explains. “With the help of my father, and the patience of my wife, we completely disassembled the car, and have rebuilt it back to what it was before—and better.”

The car is raced these days in local index-class events, with 11.20 elapsed times possible while running naturally aspirated. The car strikes deep into the 10-second zone when the giggle gas comes alive.

The 468 cubic-inch big-block engine was balanced and blueprinted, then built and assembled by Nick’s Machine and Focarino himself. On board are a number of stock parts installed to keep build costs down. The stock block has been bored 0.060-inch oversize and filled with a stock crankshaft, using a set of stock-length 6.135-inch connecting rods that have been deemed acceptable for this application. A set of JE 11.0:1-compression forged pistons are used. A Melling oil pump works in conjunction with an 8-quart Milodon pan to ensure adequate oiling.

The induction system is where the performance is built for any engine, and that’s no different with this bullet. A set of 990 OE iron cylinder heads were picked out, with valves actuated by a Lunati solid roller camshaft with healthy 0.680/0.695-inch lift and 267/276-degree duration figures. Lunati solid-roller lifters are used to push the valves up and down via Manley pushrods. A Holley Strip Dominator intake manifold breathes fuel from a Quick Fuel 950-cfm 4150-style carburetor. Focarino says the engine makes 575 horsepower at 6,800 rpm along with 525 lb-ft of torque at 4,300 rpm.

For extra motivation—and bigger smiles at the end of the track—he’s installed an NOS Cheater nitrous oxide system, which puts an additional 200 horsepower at the beck and call of his right foot when the loud pedal is pressed.

Ignition is handled by MSD, including the company’s big-block Pro Billet distributor. The Hooker 2-inch-primary headers have been tuned up by Jet-Hot to keep underhood temperatures down, and the rest of the exhaust was crafted by local shop Mufflex to include 3-inch pipes and turbo mufflers.

The ’72-vintage Turbo 400 transmission, assembled by John Sawicki, has been beefed up internally and is now fronted by an 8-inch, 5,200-stall ATI torque converter. Focarino assembled the spool-equipped 12-bolt rearend himself, outfitting it with a set of 4.56:1 gears in the process.

A set of Greg Weld Track Star wheels helps to lend the car its timeless appearance, measuring 15x3 in the front and 15x8 wide in the rear. The front wheels are wrapped in Mickey Thompson Sportsman 28x7.5x15 skinnies, with the rear wheels covered in sticky Hoosier Drag Radials measuring 295/65/15.

On the inside, the choice was made to retain most of the stock appearance, relying on leather-covered black GM bucket seats and door panels, with black factory GM carpet underfoot. The leather-covered factory console has been augmented with an aftermarket B&M Pro Stick shifter to increase the car’s performance capabilities. Auto Meter Phantom gauges sit front and center in the console to allow for easy monitoring of engine parameters. All of the interior work was done by Focarino himself.

Underneath, the suspension modifications center around a set of four TRZ Motorsports tubular A-arms, Moroso rear springs, and Calvert Racing shocks at all four corners. Focarino enlisted the help of Wise Guyz to install the six-point rollbar that’s equipped with dual swing-outs.

Bob Conier was responsible for handling the bodywork and subsequently the Corvette Yellow paint and graphics scheme that were laid down on top. There are no external modifications. Focarino simply relies on the factory cowl-induction hood and chrome bits to help finish off the car’s show-stopping appearance.

Other help through the build includes—of course—Dana’s love and support and Banana Racing’s assistance whenever necessary. And Joe Junior relied heavily on dear Dad’s support and knowledge—both initially and upon the car’s reappearance into the family—to help turn the car into what it is today.

This always-in-progress build, performed mostly in the backyard, displays craftsmanship not often found in this realm. The technician from New Jersey has an upper hand on fellow enthusiasts as he’s spent a lifetime refining his modification skills. The only thing he says he’d change if he started the build fresh today would be to build more power, an issue which is only limited by the power of the pocketbook—and one we wouldn’t be surprised to see him remedy in the future.

“I built this car with the love and support of my wife, my family, and my friends; we make good memories every time it’s taken out. This time, this love is not slippin’ away,” he says.