Homebuilt Hammer: This 1970 El Camino looks good moving passengers, parts, and whatever else needs to be hauled 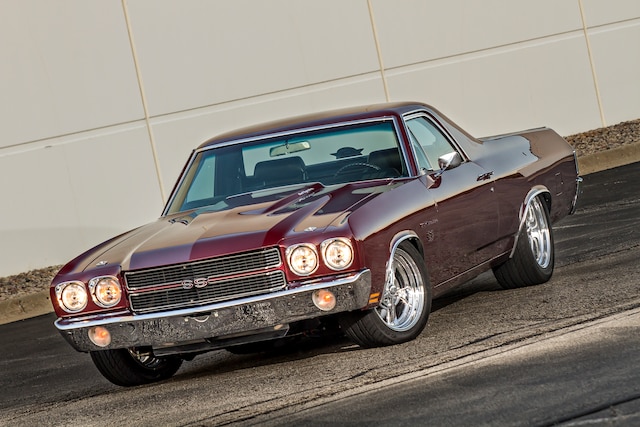 We’ve all heard the stories. The ones where a friend of a friend had a cousin whose brother found their ultimate dream car. Of course it was a completely unmolested, super-clean California car that they got in some uncanny situation. Well, I’m here to introduce you to a guy who is living that real life tale. His name is Bob Pettigrew, and his car is a 1970 El Camino 454 SS backed by a factory-optioned automatic.

In the summer of 1984 while visiting Anaheim, California, from Chicago on a family vacation, Bob was thumbing through the auto ads in the local paper when he spotted an El Camino that piqued his interest.

Not wanting to wait, Bob called the number in the ad, made some small talk with the seller, and not long after made a money transfer, then headed over to go check out his new toy. And instead of flying back home and having the car delivered, he and his son decided to drive the car and travel the backroads of the U.S. and trek the 2,000 plus miles back to their northern Illinois home.

Along the way they hit numerous stops, including Long Beach, California; Grand Junction, Colorado; and Kearney and Lincoln, Nebraska; where they loaded up with some rare factory aluminum intakes, an original Chevelle cowl-induction air cleaner, a host of trim pieces for the El Camino, and a new front clip for his son’s 1965 Impala project. After all, the El Camino has a bed and it’s hard to pass up those killer deals.

The car has gone through a number of phases, from original-style restoration to the Pro Touring-inspired setup it currently sports. The project kicked off when Bob decided it was time for a complete makeover. Hitting the paint booth was the first stop where he slathered it with a Dark Maple Deltron basecoat and topped it with a smooth layer of clear. Advanced Plating gave all the chrome pieces new life and accented the polished 17x8 and 18x10 Billet Specialties rollers wrapped in Goodyear Eagle F1s.

The interior was left fairly stock with deep black shades covering the original GM vinyl buckets, carpet, and auto console. Just under the dash-mounted Kenwood head unit is the only evidence of the performance under the hood. That’s where the engine’s vitals are monitored by a Zeitronix wideband digital display in conjunction with the GM six-gauge dash cluster.

The sounds pumping from the Kenwood speakers and Rockford Fosgate sub, coupled with the Vintage Air A/C system blasting a controlled climate make this one comfortable cruiser.

Inspired by the performance of modern cars, Bob wanted his El Camino to run and ride with the likes of a modern muscle car. To achieve this, Bob boxed the frame and added lateral crossbracing under the whole car. With over 3 inches of drop from the Belltech spindles and QA1 coilovers, the car got down to the right height over the Global West tubular A-arms and Currectrac rear control arms. Paired with 12 inches of Bendix stopping power in front and 11-inch PBR rotors in the rear, this Elco has no problem controlling the power when necessary.

The real key to the project, though was the LS5 454ci block punched to 468 inches. Bob had Rhyne Competition Engine out of Gary, Indiana, put the new powerplant together. In the heart of it lies a Cola crankshaft, pump-gas friendly 9.5:1 Wiseco pistons, and a mild pavement pounder 0.586/0.610-inch lift Crane cam.

Topped with aluminum GM oval-port heads and an Edelbrock Victor EFI intake, the Holley multiport EFI system allows the big-block plenty of air and fuel. On the other end, the Jet-Hot-coated Hooker Super Comp headers and Stainless Works exhaust allow a more free-flowing exhalation with a deep rumble. A COMP Cams beltdrive system and a Delphi coil-on-plug setup with a fabricated billet cam sync distributor by Bob help the Holley ECU keep everything in check.

To keep with the street cruiser motif, the big-block is backed by a 4L70E built by Finish Line Transmissions in Wood Dale, Illinois, and stuffed with a Hughes Street Fighter valvebody and Coan 3,000-stall converter. Out back, the 12-bolt rear has 3.73:1 gears, limited-slip diff, and Strange Engineering axles with C-clip eliminators.

Bob would like to thank his family for always being there and lending a hand, and Mike Schlesinger at Street Machines Inc. out of Bensenville, Illinois, for the use of his shop and tools. Larry Mass at Area One Motorsports (Franklin Park, Illinois) did his magic with the EFI system for a smooth-running ride.

Nowadays, Bob, like many gearheads, just likes to get out in his hot rod and hit the local cruise nights and shows with his buddies. Unsure if there is another change in setups for this car in the future, Bob does want to take the old paint down and show it some new love, but for now he’s just enjoying his homebuilt hot rod.

The unusual and iconic Chevrolet El Camino was introduced 56 years ago today, in production for nearly 30 years.