Earth Mover: The past is gone. The future may never see a car like this. It is one of the brutes, and all it needs is a way of staying in contact with terra firma 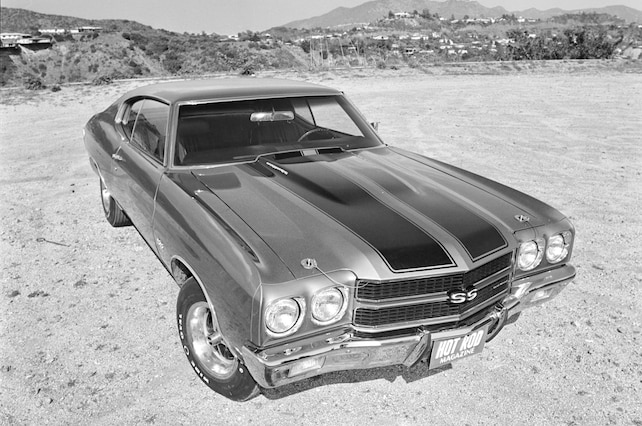 Editor’s note: A prophesy of the 1970 LS6 Chevelle’s place in muscle car history, this road test originally appeared in the May 1970 issue of Hot Rod.

That first supercar Chevelle, back in 1965, was some kind of a strong machine. It had a 375-horse 396, and while it lacked a few of the refinements that occur with aging, it began life as the hottest Chevrolet, except for Corvettes, ever to run off the end of an assembly line.

The 350-horsepower 327 V8 Chevy II was a fair equal, but the lengths to which it could be taken weren’t as far-reaching as the inaugural issue of the SS396. The first model was a brute, and the last model of the Chevelle muscle car is the epitome of parts-gathering from existing bins for adaptability to something that can and will perform. And last in the line of supercar products by Chevrolet may well be this one: a 454-cubic-inch, 460-horsepower, V8-driven SS Malibu. It could be the last because, even though buyers might still be available after 1971, strict legislation concerning emission outputs, coupled with ascending insurance rates, will render this car - or this type of car - worthless. Non-leaded gasoline will be mandatory in California late in 1971, and one year later, the entire U.S. will follow. Unless some other way of using this kind of fuel is found, compression ratios of 8.5 to 9.0:1 will be the order of engine operation. When insurance rates reach one-third of a car’s value, and that’s the direction in which they’re headed, it is usually not economically feasible to own this kind of thrasher. We savored every moment of this car, for the memory may have to last a long time. I hope this experience can be related well enough for all of us to enjoy.

This particular Malibu is a hard one to trace through normal specification sheets and pricing literature. In a sense, it doesn’t exist. Chevrolet doesn’t emphasize that an LS6 454-cubic-inch V8 option is available in anything other than a Corvette. But Chevelles can have it too, along with a cowl induction hood ($147.75), M-22 Muncie four-speed close-ratio gearbox ($221.90), and a limited-slip-equipped 4.10:1 rear axle ($25.30, special order). That’s just some of the equipment our earth mover came with, plus the SS package that retails for $503. The LS6 is an additional $263.00, and although it shows as 450-horse when applied to Chevelle models, everything about it is identical to the 460. Chevrolet offers another 454-inch option, the LS5 engine (or Z15 option), and it is rated at 360 horsepower; but here again is an identical powerplant to the 390-horse variety fitted to big Chevys. The LS5 has a hydraulic lifter valve train, one point lower compression (10.25:1), Quadrajet carburetor, lower price and less startling performance. The $263 price difference is less than building up a 360/390- to a 450/460-horse version.

The M-22 Muncie transmission is perfectly suited to this engine, but its linkage isn’t. This one was probably the smoothest we’ve had, but the stick angle is such that it is easier to go from third to second than from third to fourth. All of us were leary of pulling the stick hard, because the top mast is angled toward the driver, and unless he consciously pulls straight rearward, chances are good of the shifter catching on the neutral gate. It never went to second, except during low-speed tryouts to get the knack. The close-ratio box is noisy, and it has finer clutch drive gear splines than the regular production option M-22, as well as larger and heavier mainshaft rear splines and a pressed-on speedo drive gear. It is not directly interchangeable with the RPO M-22. Its heavier construction ensures a greater amount of reliability.

The best quarter-mile time was accomplished at Irwindale Raceway by John Dianna, who has a definite knack for this sort of thing. His low time of 13.44 seconds was followed by two other runs of 13.48 and 13.52, showing a consistent pattern. Shift points proved best at 6100-6200 rpm, and the maximum engine speed for coming off the line was 900 rpm. After some shock changes, the initial engine speed still couldn’t be higher than 900, which is idle speed. There is so much bottom end on this car that it is impossible to use all of it effectively with street tires. These happened to be F70-14 Firestone Wide Ovals, with best pressure settings at 30 psi on the left rear and 28 psi on the right. Any throttle stabbing off the line would cause the tires to go up in smoke, and the car generally wanted to get sideways as a result. A decent set of drag slicks would naturally get more bite to the ground, but the immense amount of torque going through the drive line would just as naturally start breaking parts. Better to cool it and not have to walk home. If this were our car, we’d invest in a big 9 3/4-inch ring gear carrier and housing, with a good traction bar setup. Traction bars are a good recommendation for stock rear steups. The 10.5-inch-diameter, bent-finger, single-disc clutch didn’t even hint at giving up, even after thirty runs. We did get rid of some of the disc facing, increasing free-board length, but that’s merely an adjustment job. The pilot bearing got a little noisy after many back-to-back runs, and while an owner of such a car as this has the gearbox out to install a formidable scattershield, it will pay him to replace the throwout if the car has already logged a few thousand miles. The installation of a blast shield is mandatory for this car.

Don’t even think about not doing it. Chevrolet would’ve been smart in doing it on the line. Ours received a Lakewood shield.

Back view kind of reminds us of a GTO, and that’s a compliment. Dark section in rear bumper is a shock-absorbing, synthetic-material filler. Rear fender clearance is adequate for stock-class slicks and wide wheels.

Underhood is filled with plumbing and horsepower. The 454 wants to run warm, but that doesn’t hurt performance when below the 200° mark.

Short-stack atop Holley 4150 gets filter pan against cowl induction hood and air stream from flapper scoop.

There’s been some good planning on the inside. It’s comfortable, and the panel arrangement is the best Chevy has ever done in this series. Thicker wheel rim and straighter shift lever are needed. Add an oil gauge and the system would be great.

Our better quarter-mile times were made when the air-filter element was removed and the engine was fairly warm, just a shade under the 195° mark. The warm motor killed a bit of the bottom end, making it easier to get the car moving. After a full cool-down, low-end torque was so tremendous that there was no way the car would leave smoothly. It either bogged or it cranked the rear wheels into the outer limits. Torque isn’t a passing phase in this 454. No matter what the shift point, the rear tires always spun off a bit of elapsed time with each upshift.

We can’t vouch for the effectiveness of the cowl induction air inlet, but it seems that it would work better if it were both wider and farther to the rear. A plenum chamber using the domed section of the hood and fed from an opening very near to the windshield offers more force-feeding action. The opening and closing action of the present door is actuated by manifold vacuum.

If you can afford this car, you also have to feed its appetite, and this might result in a cost equal to monthly payments. An 11.25:1 compression ratio demands the best of leaded gasoline. Our poorest mileage figure was 7.30 miles per gallon, and the best was 10.006. The average consumption turned out at 8.414. A full tank of fuel won’t last 200 miles at this rate. And this 4150 series Holley was lean on the primary side, which has to be done to make engines like this pass emission tests. The lean condition causes minor surging in 60-70-mph traffic.

Driving for the fun of it is a pleasant pastime. The 454 operates smoothly in congested traffic, and its handling is as good as other GM intermediates. We changed shock absorbers, adding Hurst/Gabriel Dual-Duty units – which, incidentally, will be the subject of a technical feature in next month’s Hot Rod as a result of our testing them on this car. The stock Delco shocks have a 1.00-inch-diameter piston, and they really don’t offer any drawbacks. The Hurst/Gabriels, with their 1 3/16-inch piston, combined with other refinements, simply made handling better. Power front disc/rear drum brakes are a part of the SS option, and so are seven-inch-wide wheels. The variable ratio power steering and front and rear stabilizer bars, worked in with everything else, contributed to an overall good handler and a pleasant and very predictable road and highway car.

It’s a quiet car too, even with the windows rolled down. Road and operational noise is well isolated. The interior treatment shows signs of approaching GTO and Olds 4-4-2 in both sophistication and quality. The optional instruments require $84.30 extra investment, but you can see them all and they all work. An oil pressure light is used, and there should be a pressure gauge available, working in conjunction with the warning light.

There were a lot more things we liked about this car than we found not to our liking. It’s obvious the SS Malibu 454/450 isn’t meant for paper routes, or drivers who don’t like being able to go quick and corner flat. An expensive proposition is what it is, and speed costs money, so it’s a matter of how fast you care to go. It isn’t charitable to throw stones at a dying breed; and while we all hope this isn’t going to be the case, we’ll just keep our five smooth stones waiting for some Goliath that says it can do as well, then doesn’t.