Not Feeling It: When fast cars don’t feel fast, the result is 952 rear-wheel horsepower of blown and sprayed insanity 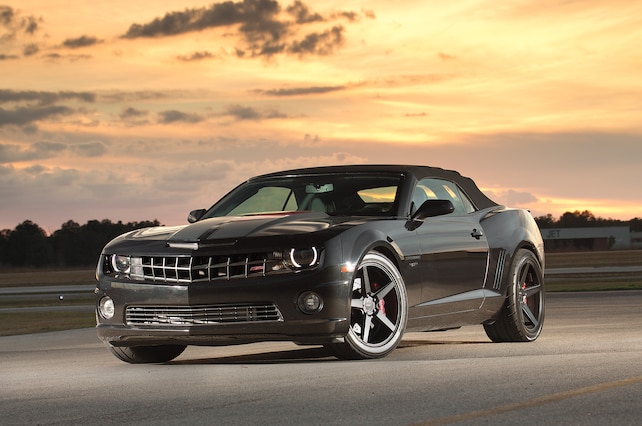 Hot rodders call it a butt-o-meter. It refers to how accurately human nerve endings and hormones can correlate the sensation of speed with actual speed. Evidently, Bobby Chabrier doesn’t have one, or it’s hopelessly defective. While many owners report that their stock fifth-gen Camaro SS feels slower than the high-12-second timeslips indicate, it’s somewhat understandable given how smoothly and quietly these cars go about their business. However, Bobby’s 2012 model isn’t exactly stock. After more than doubling the car’s output to 766 rear-wheel horsepower with a built 440ci long-block and a ProCharger F-1A supercharger, then stomping the gas for the first time, he still wasn’t satisfied. This is a man that needs help, and Bobby’s self-help program involves throwing as much horsepower at the problem as necessary until he can actually feel it.

Of course, Bobby isn’t the first hot rodder whose butt-o-meter needs recalibration, but what makes his affliction particularly unusual is a lack of any desensitizing stimuli. While someone this immune to the sensation of horsepower is often a hard-core drag racer accustomed to yanking the front tires five feet into the air, that’s not the case with Bobby. It turns out that numbness to horsepower might run in the family. “My first car was a big-block 1969 Camaro that I modified with headers, a high-rise intake manifold, and a big carburetor. It was quick for a kid in high school, but I didn’t race it that much and I didn’t really have any fast cars between then and now,” he recalls. “My dad is a big-time drag racer, and he has a 1970 Corvette that puts out 700 horsepower. It’s a sleeper that looks completely stock. I just wanted to build a car that could beat my dad’s Corvette.”

As a former first-gen Camaro owner, the retro styling of the fifth-gen brought back fond memories for Bobby and inspired him to get back into the hobby. That hankering only grew deeper when he caught a glimpse of the 45th Anniversary models, so in 2012 he ordered one up and took delivery shortly thereafter. In hindsight, he realizes that dumping one mod after the next onto a limited-production model wasn’t the smartest thing to do, but he couldn’t help himself. “I didn’t want to devalue the car by modifying it, but I ended up doing exactly that. After I drove it I thought ‘Man, this thing’s not fast enough,’” he explains. “I decided that if I was going to modify the car, I needed to do it right the first time. Right away, I planned on dropping in a built motor based on an LSX block, then putting a big blower on it. After putting it off for a few months, I called up Late Model Racecraft one day to put the plan into motion.”

Upon arriving in Houston, the LMR crew yanked the stock LS3 small-block and got to work. To prep the fifth-gen for boost, the new engine combo was designed around an all-new Chevrolet Performance LSX block. It has been bored to 4.185 inches and fitted with a Callies 4.000-inch crank and rods along with Wiseco 9.5:1 pistons. The net product is 440 hungry cubic inches. The trump card in the mix is a massive ProCharger F-1A blower that routes pressurized air molecules into Trick Flow rectangle-port cylinder heads and a factory LS3 intake manifold. LMR’s custom, triple in-tank pump provides the fuel supply, while exhaust exits through American Racing 1 7/8-inch headers and dual 3-inch MagnaFlow mufflers. On the chassis dyno, the Camaro registers an impressive 766 rear-wheel horsepower.

To bring the rest of the driveline and chassis up to snuff in the wake of doubling the Camaro’s factory hp output, LMR fortified the Tremec six-speed manual trans and mated it to a McLeod RXT twin-disc clutch and aluminum flywheel. Since the supercharged LSX would have snapped the factory halfshafts in no time, the entire factory independent rear suspension assembly has been replaced with much beefier hardware out of a factory Camaro ZL1. This includes a cast-iron pumpkin with a massive 9.9-inch ring gear, and asymmetrical axles that reduce wheelhop. BMR lower control arms and bushings hold the new IRS in place, while a BMR tandem of subframe connectors and sway bars stiffen up the unibody while keeping it flat in the corners. Sticking it all to the pavement are gooey Nitto NT05R tires wrapped around 20-inch KMC wheels.

Surely, more than doubling the power output of a stock Camaro SS should satisfy even the most defective butt-o-meter, but that wasn’t the case. “After I got the car back, I still wasn’t that impressed with the power of the new supercharged combo. It just didn’t feel that overpowering,” Bobby recalls. Almost immediately after taking delivery of the car, Bobby called up LMR and ordered up a Nitrous Outlet fogger system. Shortly thereafter, the Camaro laid down 952 horsepower on the rollers, and as this story is being written, Bobby hasn’t sampled the extra 200 ponies just yet. If that doesn’t satisfy him, who knows how far his hopelessly defective butt-o-meter will take him, but it’s going to be fun to watch. That’s for sure.