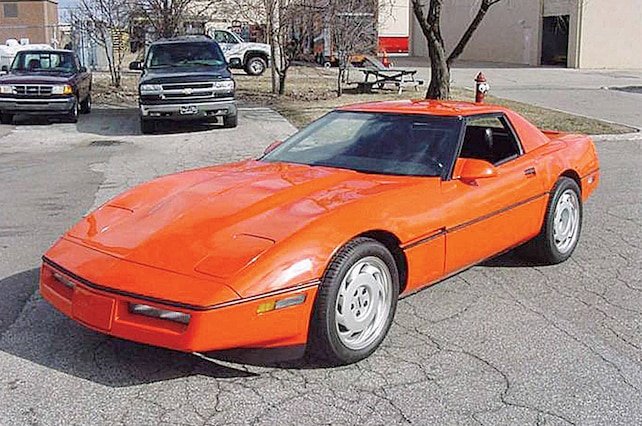 There must have been something in the office water cooler in the late ’80s that inspired engineers to want to put seriously big engines back into Corvettes. Scott Leon was a project coordinator at the GM Proving Ground in Arizona. And although the Corvette was being hailed as “The Best Vette Yet!,” hammering the competition in the SCCA Showroom Stock series, and had won several magazine new car top speed competitions and was crowned “The Fastest Car In America!,” there were some that longed for the days of big-block horsepower and torque. So, Scott Leon cooked up a plan.

One night after work, Leon and his crew decided to see if a big-block engine would fit between the framerails of a C4 Corvette. Using an old ’84 mule car, the crew was surprised to find that the big Rat fit into the frame with only a few minor chassis modifications. It was definitely a squeeze, but it fit. Since new Corvettes now used electronic fuel injection, Scott wanted the big-block to be “modern,” so they cobbled together a tuned-port fuel-injection unit with a modified aftermarket tunnel-ram manifold. After a little welding and a set of Buick Grand National fuel injectors, the rigged system worked.

This crude engineering study was enough for Leon to get management to agree to build a 454 prototype using an ’86 coupe with an automatic transmission. Later, another prototype was built, this time using an ’89 roadster with the Z51 performance suspension, and a six-speed manual transmission. Things were beginning to get interesting because the big-block C4 could deliver ZR-1 performance at a fraction of the cost! Consideration was seriously given to the possibility of offering a Chevrolet-designed, big-block engine swap kit, available through the Chevrolet Performance Parts catalog.

The final version of the ZR-2, aka “Big Doggie,” was very impressive. Scott Leon chose to use one of Chevy’s marine 454 short-block engines and added a set of L88 aluminum heads. The ZR-2 had become a feasibility study, so the engine assembly was modified so that all production accessories would easily bolt on. The only modifications to the car were to the floorpan and the right side of the framerail, forward of the firewall. Aside from the slightly raised hood dome, the completed car looked like a production Corvette.

Big Doggie’s fuel-injected, L88 aluminum headed 454 was never dyno tested, but engineers estimated the power around 385 hp (net), on par with the ZR-1’s new LT5 engine, but with a big difference—torque, that “other” horsepower. The 454 big-block had much more low-end torque (big-block fans rejoice!) than the ZR-1’s LT5. The privileged few automotive journalists that got to drive the car confirmed the development engineers’ experience, reporting that the big-block C4 pulled like a freight train. To save weight and slightly stiffen up the structure, Scott Leon had the convertible top mechanism removed and the hardtop bolted into place. And with the Z51 suspension and six-speed manual transmission, the car was a hoot to drive.

While not nearly as extreme as the V-12 Falconer, Big Doggie’s chances of making it into production were zero. Since Chevrolet had not only bought Lotus to be used as an engineering and development satellite, and had so much had invested in the ZR-1/LT5 program, there was no way management was going to let a big-block option back into the Corvette lineup. And getting a big-block to pass emissions and fuel mileage requirements were beyond doable. The engine swap kit didn’t even make it into the Chevrolet Performance Parts book. No, ZR-1 performance at a fraction of the cost wasn’t what GM was interested in.

In this feature article VETTE takes a look at Les Kernya's 1991 Chevrolet Corvette, which is a custom C4 coupe from Down Under with a righthand drive (RHD) cockpit layout - Vette Magazine

This Metallic Burnt Orange 1991 Chevy Corvette C4 Coupe is 17 years old but is on its way to full restoration. So far it has had some bolt-on performance mods done to the eninge. The rest is yet to come. Check it out at Vette Magazine.

Nobody can touch this 10-second, nitrous-fed, 1991 Corvette ZR1 monster