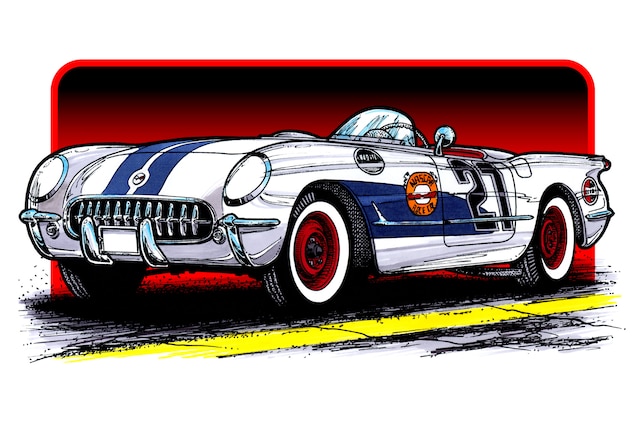 There isn’t another car in Detroit history that has been so consistently involved in racing as the Corvette. Today, the base model C7 is more racecar than ever. But it all had to start somewhere and the generally accepted break-out racing event for the Corvette was Sebring 1956 when a factory-prepared 265 4-speed Corvette won 1st place in the Sports 8000 Class at the 12-hour race event. Chevrolet marketing ran print ads declaring the Corvette as “The Real McCoy.” But, we have to roll the clock back to 1955 to get to the very first factory-built Corvette racecar, and it wasn’t a road racer, it was a NASCAR racer. A “NASCAR”, Corvette? Yes!

By 1953/1954 sports cars and sports car racing in America was still in the larva stage – not quite fully formed. The SCCA was launched in 1944 as an “enthusiasts’ group” for foreign sports cars. NASCAR was started in 1948 by mechanic William France, Sr., and NASCAR meant: big, high-powered America cars with roots to the days of prohibition and moonshine. As NASCAR developed in its early days, more and more European sports cars were being imported into America. Harley Earl’s 2-seater fiberglass Chevy was designed to grab a piece of the burgeoning sports car market. It was very advanced thinking on Earl’s part. NASCAR was doing the same with their events by creating an “International Class” (sports cars) that raced before the big events – sort of a warm-up act.

1955 saw a major advancement for the fledgling Corvette – the all-new 265cid Chevy small-block engine. Of the 700 1955 Corvettes, all but seven had the new engine. Before we get into the story about the Chevrolet Work Order that created the first factory-built Corvettes, there’s a back-story. In the summer of 1955, two stock, production Corvettes started showing up at short oval tracks in the Carolinas and Virginia. The cars were raced by future NASCAR legends, Herb and Don Thomas (the Thomas brothers) and Junior Johnson, as well as Jim Massey, Johnny Dodson, Ralph Liguori and Gwyn Staley.

These were regional tracks and the cars didn’t score any big wins, but these were out on the track, mixing it up in the street fighter-like world of NASCAR. The unregistered cars were essentially “on loan” from Chevrolet. So when plans were made for a serious Corvette racing effort, masterminded and overseen by three-time Indy 500 winner Mauri Rose (1941, 1947 and 1948), the loaned cars were called home. Rose knew all about wind resistance, streamlining, and the proper location of important gauges. Chevrolet chief engineer, Ed Cole, knew whom to call upon to make a racecar out of the Corvette. Duntov was not yet in a position of authority to drive this project.

On November 3, 1955, just less than two months before the rebodied 1956 Corvette was to start production, Chevrolet Engineering Department Build Order #17395-1 was sent to the Chevrolet “Experimental Shop.” 1953 Corvette #211 and 1955 Corvette #399 were to be retrofitted with high performance, dual four-barrel 265 V-8 engines with 2-1/4-inch side-exit exhaust, small driver-only windscreens, and a plastic tonneau cover over the passenger side. The engine had machined reliefs in the pistons, streamlined lighter valves, and bored .30-over. The drivetrain used a 3-speed close-ratio manual transmission and a 3.27-ratio heavy-duty rear axle. Fresh wheel bearings were installed on the new shot-peened front spindles, while springs and hubs on the car were stock.

Early 1956 was the breakout period for the Corvette. The Speed Week at Daytona in February and then the 12 Hours at Sebring were a big deal for Chevrolet. After the basic work was completed, the cars were sent to Smokey Yunick’s shop in Daytona Beach for their final preparation. But the cars that got the media attention were the three, specially prepared ’55 Corvettes, dressed with ’56 bodies that were driven by John Fitch, Betty Skelton, and Zora Arkus-Duntov. With new ’56 Corvettes rolling off the assembly line, these cars were the media darlings – the C7.R cars of their day. With racing stripes, cut-down windshields, and other racing details, they were very serious-looking cars that set class speed records.

The following month when one of the “’56” cars took 1st place in the Sports 8000 Class at the Sebring 12 hour race, Chevrolet marketing and advertising ran a photo that was worth a thousand words, showing the racer in the pits, wearing battle dirt and a driver dashing out of the car. The headline simply said, “The Real McCoy.” The impression was just what the Corvette needed, but what about the 1953 car #211 and the 1955 car #399?

After the big splash at Daytona and Sebring, the ’53 and ’55 racecars were sent back to the short oval NASCAR tracks in the Carolinas and Virginia – out to pasture so-to-speak. Through the summer of ’56 the older Corvettes were driven by: Pee Wee Jones, Bobby Meyers, Gwyn Staley, Junior Johnson, Jimmy Massey, and others. For a brief time that summer there was a rivalry between the modified Corvettes and racing versions of Ford’s new Thunderbird, referred to as “Battlebirds.” Corvettes were taking it on the chin in sales against the Thunderbird, but by the time the ’57 Fuelie and RPO-684 arrived, the 2-seater T-Bird was about to be phased out, giving Chevrolet the entire American-made sports car market.

No one imagined that 60 years later anyone would be talking about #211 and #399, so documentation is very sketchy. Curiously, the cars had not yet been titled, but in 1958 Leslie Gray Tuttle bought 1953 #211 from NASCAR and became the first official titled owner. Even though the car was only five years old, it was seriously outdated. What were once purpose-built racecars were not worth the effort to make competitive, so they were turned back into street Corvettes – which turned out to be a good thing. When racecars are sold and raced over and over, they tend to end up in the junkyard.

It seems that for a time, the 1953 #211 car got to keep its 265 small-block and received a few minor upgrades to improve its street worthiness. Several owners and paint jobs later, the car was returned to its original stock, 1953 Blue Flame Six configuration. When Terry Michaelis ProTeam Corvette bought the car it looked like any other white 1953 Corvette, but the VIN #211 made all the difference. There were only two factory-built Corvette NASCAR racers, so Terry simply had to restore the car back to its racing build. The Lingenfelter Collection currently owns the sister NASCAR 1955 Corvette #399.

On January 17, 2015 the car went on the block at the Barrett-Jackson Scottsdale Auction as part of their Salon Select 5000 collection. Cars selling for big prices at auctions are always fun. The 1953 Corvette NASCAR racer has a totally unique pedigree as being the one-and-only “first” Chevrolet-built, Corvette racecar. The documentation is extensive, considering how ignored the cars were. Hopes were high that possibly NASCAR team owner and Corvette collector Rick Hendrick might buy the car for his collection. Bidding worked its way up to $2 million, when the auctioneer stopped and carefully explained the importance of this car in Corvette history. It was a nice review, but didn’t help. The bidding stalled at $2 million and the reserve was not met, so it was a “No Sale.”

So, the next time you read a rave review of the C7 or watch coverage of the Corvette Racing team, remember, it all goes back to this car.