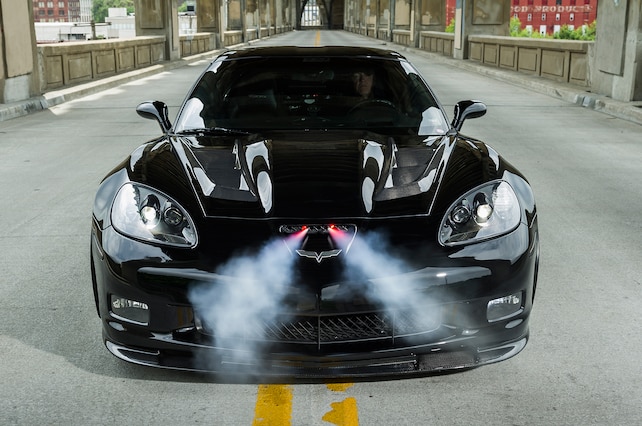 Mike Fisher has spent over 60 years on this spinning ball of dirt and in those many years he’s figured out one truth about himself, he likes stuff that’s fast. Fast boats, fast bikes, and most of all fast cars. Which brings us to his current ride: a 2008 C6 Z06. Mike has wanted a Z06 since he first spied a C5 version, so it didn’t take much persuading from his son Brandon to talk him into buying the ’08. “He pushed me to build the Punisher into what it is today. He went to all of the car events and drag races; he was my team and he also helped with a lot of the custom installs, from the chassis to the ground effects,” recalled Mike. The Corvette was found on Craigslist in May 2011 and it had a scant 1,826 miles on the clock. The Corvette didn’t have a scratch and was so pristine that the owner wouldn’t even let Mike sit in it or take it for a test drive. Mike relayed, “I made an offer and he wouldn’t bite, so I left my phone number and walked away. Two days later he called and accepted my offer. That’s when it all started.”

Brandon brought some of his friends into the project and before long the Vette began to get rolling. As Mike told us, “A friend of my son, Tanner Popp, helped with a lot of mechanical changes such as differentials and engine components, while Bobby Oberlander and Jak Welch were brought in to lend a hand on other aspects. We lost Brandon in 2013 and I credit these men for helping me back to my love of hot rods. I don’t know if I will ever part with this car since it has my son’s fingerprints, and his love, all over it.”

The plan called for fast, so the area that got the most attention was the engine. The 427 LS7 was pulled and while the short-block was left stock, it was topped with a set of high-flowing Mast Motorsports Black Label 12-degree LS7 heads. MC Racing in Overland Park, Kansas, slid in an aggressive 243/259-deg. duration (at 0.050), 0.691/0.702-in. lift, 112-LSA camshaft that really upped the LS7’s power output and gave it an especially gnarly exhaust note. Other changes to the engine included upgraded COMP trunnions for the 1.8 ratio GM rockers, a FAST LSXr 102mm intake, Nick Williams 102mm throttle body, MSD wires, and Dynatech headers with off-road X-pipes. But more air and a big cam can only take you so far, so Mike had Terry Murphy Race Cars in Blue Springs, Missouri, add a little something extra, a hefty shot of nitrous. A Nitrous Express system centered around twin 10-pound bottles sends a 150-horsepower shot of go to the worked-over LS7 at the touch of a button. The nitrous system has its own dedicated fuel system and when the switch is flipped it will add to the 594 rwhp the LS7 makes on motor alone. The fastest quarter-mile to date is 10.28 at 134 mph without nitrous, so we can’t wait to see what it does with the extra motivation.

Other key mods to the Vette include LG Motorsports drag spindles as well as smaller Baer rotors and C5 calipers to clear the Weld Racing V-Series 15x10 rear wheels. This helps stuff a meaty 325/50R15 Mickey Thompson ET Street Radial in the wheelwells with matching Weld 17x4.5 and MT skinnies up front. The Tremec TR-6060 six-speed is stock, and benefits from the addition of a Centerforce DYAD clutch to help hold all the newfound power. As a street/strip setup, the stock Z06 suspension has so far served Mike well. Though some modification was required to the lower rear A-arms for wheel clearance.

Lots of body mods can be found, like the ground effects kit and the carbon-fiber hood with the ghosted Punisher logo. It makes for an ominous looking ride that’s as good looking as it is fast. Visual Imagination in Missouri did the black paintwork, which included three coats of clear over the black base and graphics. The interior was upgrade with NRG carbon-fiber seats, quick-release steering wheel, and a five-point harness system secured to the custom RPM rollcage. There’s also a trio of A-pillar-mounted auxiliary gauges to track the LS7’s vitals. It’s all business with enough style to stand out from the other rides at the track.

In the end, the Z06 fits with what Mike envisioned when he started the project with his son. Mike remarked, “It’s exactly what we wanted and it never would have happened without the help of my son and the support of my wife, Robin. It’s stupid fast and with the cutouts open has the sickest sound around. I might try to get it up to 1,000 rwhp, but for now it’s truly a dream machine and the late-model hot rod I’ve always wanted.”