Oxygen: Bo knows how to make it glow 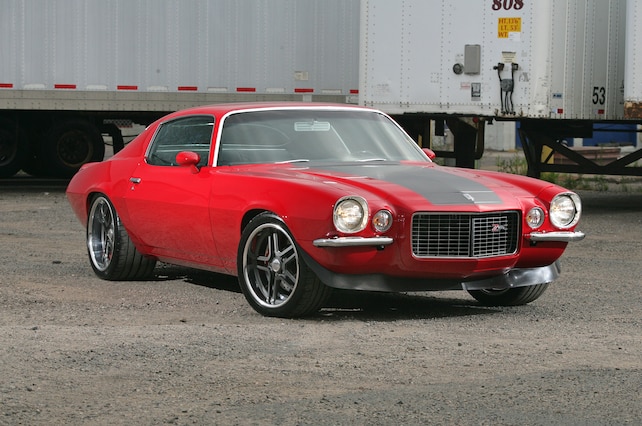 Since his formative years up there by the North Woods of Minnesota, Bryan Everett has always wanted this car. From then until now, he’s done diligence with a 1966 C10 and 1967 and ’69 Camaros. He liked them all right, but they weren’t his heart’s desire, so he set his crosshairs on that sleek second-gen floating in his mind’s eye and grew up in the meantime.

He’s 41 now, a retail management executive who developed strategies and assembled teams to enact them, and planned two steps into the future. He approached the Camaro build with exactly the same mentality and by making careful decisions. Bryan and his wife, Pam; son Caleb, and daughter Rylee hail from Plymouth, a bedroom of the Twin Cities. Happily, the territory is liquid with top-notch craftsmen of all persuasions so he didn’t have to part it out to parts unknown, then wait by the phone, leak sweat for months, and hope for the best. He could visit whenever he liked to chart the transformation … and squawk if he felt the need. All of it made for a better night’s sleep.

Bryan dragged a clean carcass away from some west Texas dry spot and, yippee, it was straight and solid. As the shell sat, he got busy with his wife and the kids and decided how it should look. To crank up the bonfire, he handed the pile over to Vescio’s Customizing & Restoration in Rogers, Minnesota. Bo Vescio would build the chassis, then do the bodywork, the assembly, and apply the scarlet overcoat. Bo would translate the Everett’s desire and design into practical application.

First, Vescio stripped it down to nothing to see what that landscape really was. He shaved and smoothed the firewall, then anchored a complete N.O.S. clip and followed up with perfect GM original doors. The straightness included perfect lines, seams, and gaps, critical manifestations of the anal-retentive everywhere. To stiffen the thing up better than week-old road kill, he put in frame connectors, torched in the mini-tubs, and fixed the shock absorber mounting bar in place. Bo invaded the car. He sprayed the floor and the bottom of the Camaro with Lizard Skin sound killer and sowed a field of FatMat noise deadener everywhere else. He revitalized the infrastructure with an 18-circuit Painless harness. While in the cave, he erected the simple, elegant console replete with aluminum cup holders and two power ports.

With the smoky, dirty work complete, Bo regarded the suspension; he wouldn’t be on a blitz, just the basics for style and ease: new leaf bundles at the rear, adjustable dampers and a hefty drop all around and fatter antisway bars at both ends. He stepped up with the brakes, though, incorporating 14-inch rotors at front and rear. He checked the clearance on the 18- and 19-inch wheels and the mondo 325/30-series back skins.

About this time, Chris Skoog at TSI up in Brooklyn Park was completing the LS6 from a 2006 Corvette. Skoog knocked the whole thing down, got a brand-new cylinder block, fitted it with a bumpier camshaft, ported and flowed cylinder heads but reused the original rotating components; certainly not a blood storm annihilator, but more than enough moxie for stoplight skirmishes. With the engine, six-speed, and 12-bolt in place, the Texas Twister was officially a roller ... and it rolled straight back to Vescio’s so Bo could linger over the coating candy.

Just as the Camaro comports with a subdued exterior vibe, its mild manner is offset by an understated though sumptuous interior treatment. Choosing shades of stubborn gray carpeting and mats serve to elevate the dusky seats and separate them from the floor, almost as if they were hovering.

So Bryan started the clock on Brian Thompson at Premier Upholstery in Rogers, Minnesota. Aside from the complete gut renovation, Thompson integrated the audio system, which included Bluetooth. He stitched the leather on the custom-built seats, extending the theme with matching door panels and back to the package tray. He went on to highlight the doors, suede headliner, and the console with tasteful red LED accent lighting. In the middle of it all, a Billet Specialties 14-inch Formula steering wheel and Billet Specialties pedal covers winking from the depths. Brian carried the theme to the trunk and finished it off.

For the exterior details, Vescio hogged-out on the brightwork. He had the bumpers rechromed. He posed a chrome surround on the new grille. He laid in new rubber, seals, and window felt; and so Bryan could see where he was going and where he had been, he replaced all the glass with sparkly new stuff.

So 20 years on, the prize Camaro came home. In the scheme of things in the land of car building, the project went from planning to reality in about a year … and compromised Bryan’s funds by nearly $100K. Its beauty is in its simplicity. It doesn’t shriek “here I am!” No, it waits. The more you unfold it, the more it reveals.