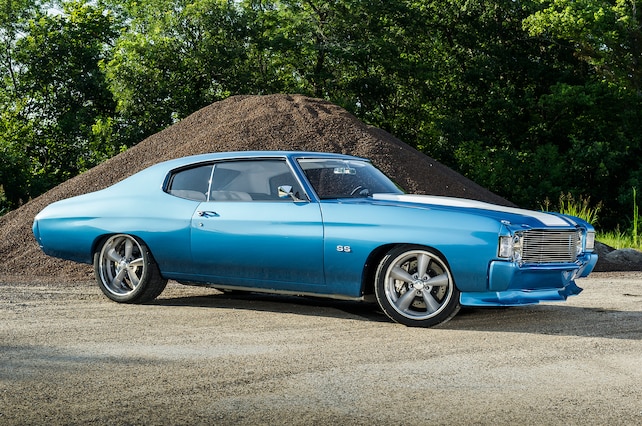 No one does four-eyed freaks better than Chevy. For some reason or another, Bow Ties always seem to look better with an extra pair of eyes. Every nerd stuck at home playing video games on prom night would like to know why, but there’s really no good explanation for this bizarre paradigm shift. Whether it’s an early vs. late C1 Corvette, a 1970 vs. ’71-and-up Chevelle, or an LT1 vs. LS1 fourth-gen Camaro, four eyes are better than two. Nowhere is this more obvious than in the world of second-gen Chevelles where it’s often cheaper to swap a four-eyed front end onto a 1971-’72 model than it is to pay a stiff upfront premium for the highly coveted 1970 body style. However, not everyone agrees with this silliness. Gary Fish actually prefers the ’71-and-up Chevelles that got Lasik and never looked back. By refusing to pay a premium on a four-eyed freak, he used the savings to drop a 720hp supercharged LS3, an overdrive trans, and a full Detroit Speed Inc. suspension into the ’72 Chevelle of his dreams.

Just like every kid that grew up around project cars, Gary has more than a few targets on his wish list. Although his dream car in high school was a ’72 Chevelle, he has many fond memories of the ’71 ’Cuda his dad owned. As such, he went to an auction intending to buy a ’Cuda, but a certain A-body caught his attention instead. “The ’72 Chevelle SS is the car I wanted in high school, but couldn’t ever afford. I looked at this Chevelle while walking around before the auction and liked what I saw, but I didn’t seriously think of buying it at the time,” Gary recalls. “When it came down the block, it wasn’t bringing in much so I decided to bid on it. Of course, the price ran up as soon as I started bidding on it, but I was still happy to bring it home.”

The good news was that the Chevelle packed a 396 big-block, a TH400, and disc brakes. The bad news was that it didn’t exactly perform as advertised. “It had been billed as a Pro Touring car, but it really wasn’t up to my standards. When we drove it home, the transmission was slipping and you had to stand on the brakes to make it stop,” Gary recalls. “I took it down to Vintage Fabrication (vintagefabrication.com) and told them to build it to my standards. It turns out that the body was very clean, but mechanically the car needed a lot of work, so we decided to just start over from scratch. We originally planned on putting a 454 big-block in it, but decided later to go with an Edelbrock supercharged LS3 instead.”

Cosmetically, the Chevelle didn’t need much work at all. It just needed some fine-tuning. “The car was a good 50-footer. Gary wanted us to tuck in the bumpers and clean up the lines of the car without straying too far from the stock appearance,” Bobby Schumacher of Vintage Fabrication explains. “We pulled off the body, powdercoated the frame, and built a custom front spoiler. The engine compartment was one area where we could get more creative without taking away from the essence of the car. We built custom inner fenders and a custom radiator cover to clean everything up, then topped off the look with a set of EMS billet hood hinges. The paint was in decent shape, but we ended up respraying the car to freshen it up.”

While the Chevelle’s exterior had to remain close to stock, Bobby and his crew were given free rein to go buck wild inside the cabin. “Gary pulled up to the shop in a Bentley and told us to re-create the Bentley’s interior in the Chevelle. We spent two to three months on the interior alone,” says Bobby. “There’s absolutely nothing stock in the interior anymore. The all-steel dash is completely custom, as are the custom-molded door panels. The custom center console is blended into the dash as well. I’d estimate that 90 percent of the time that went into building this car was spent on the interior.”

Backing up the Chevelle’s good looks is an Edelbrock supercharged LS3 crate engine kicking out 720 horsepower and a pavement-ripping 695 lb-ft of torque. It’s mated to a TCI Automotive 4L80E overdrive, which shoots torque rearward to a GM 12-bolt rearend fitted with 3.55:1 gears. Helping the chassis manage all that newfound power is a complete Detroit Speed Inc. suspension package. Up front are DSE control arms, spindles, and sway bar. Out back are a DSE four-link system, Panhard bar, and a sway bar. JRi coilovers at every corner help keep the body flat in corners, while six-piston Baer brakes bring the A-body to a halt.

When it comes down to it, the huge price premiums that ’70 Chevelles command are a bit ridiculous considering that they’re no different than 1971-’72 models beneath the skin. If more people like Gary built cool two-eyed Chevelles, maybe those with less imagination would realize what they’re missing out on. That’s probably wishful thinking, but who says four-eyed freaks should have all the fun?