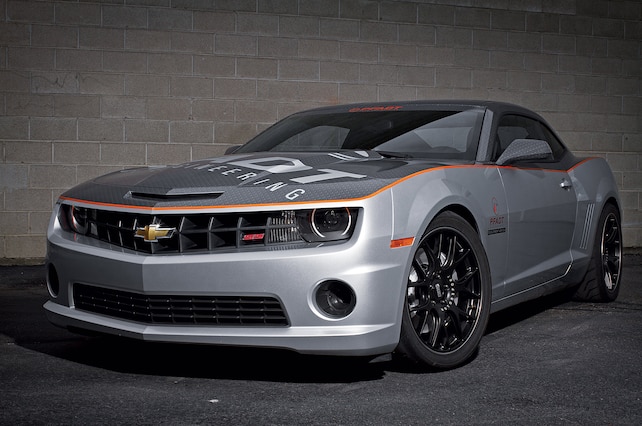 Anyone who is familiar with Pfadt Race Engineering or its products knows that whenever the company builds something it is done with precision. From its anodized billet aluminum work-of-art engine and differential mounts to the finely crafted TR-6060 shifter or its space-age looking trailing arms. Though Pfadt is based in Utah and dedicated to American vehicles such as the Corvette and Camaro, it is safe to say that its style is decidedly German—no surprise that they actually have a facility in Germany as well. Taking that one step further, Pfadt’s Camaro was clearly built with the German Autobahn and Nürburgring in mind—two pieces of asphalt on which it would feel equally at home, driving to and from the track like so many a Porsche or BMW.

Like any company vehicle, CEO Aaron Pfadt purchased the 2010 Camaro for the expressed intent of product development. The Silver Ice Metallic SS came from a Pfadt installer and Chevy dealer in Michigan and went under the knife in Salt Lake City, Utah, almost immediately. In between many miles of street driving and track testing at Miller Motorsports Park, Pfadt began its most typical upgrades such as the springs, sway bars, and polyurethane bushings. The next phase of development traded the stock dampers for double-adjustable coilovers with remote reservoirs, which combine with the adjustable Race sway bars to provide a neutral balance that is easily fine-tuned. The front and rear trailing arms were also replaced to reduce mass and increase strength. Meanwhile, Pfadt’s spherical control-arm bushings reduce binding and deflection. Last but not least, anodized 6061-T6 aluminum solid subframe bushings reduce wheelhop on launch while also becoming more stable and predictable in corners. The solid bushings work in concert with Pfadt’s adjustable rear tie rods, which more effectively lock the toe angle than factory, to make the Camaro more precise and reactive to steering inputs.

With these modifications alone, Pfadt’s Camaro endured many hard miles proving how much its components could do for the fifth-gen chassis. But eventually the time came when Pfadt decided to step up its development vehicle in search of street and track domination. The stock wheels and Pirellis were tossed aside in favor of lightweight BBS CHR 20x9.5 and 20x10.5 wheels to house sticky Toyo Proxes R888 rubber. To complement the substantial upgrade in grip, the front brakes were swapped for Brembo six-piston calipers and 15-inch rotors from the Cadillac CTS-V to better dissipate heat. Pfadt then designed a special cross-chassis brace to add rigidity and mount Sabelt six-point harnesses to keep Aaron firmly planted in the custom Alcantara seats.

Next, Pfadt commissioned Mast Motorsports to build a reliable LS7 that would provide plenty of high-end power and gobs of torque. Mast prepped the LS7 block and put together the bottom end using a Callies rotating assembly with Mahle pistons. A combination of LS7 and LS9 components were used for the dry-sump oiling system, and the short-block was finished off with a GM Performance Parts “World Challenge” cam that specs out to 239/251-degrees duration, 0.600-inch lift, and 106 LSA. The engine was sealed up with the factory CNC-ported LS7 heads and composite intake manifold for a pump-gas-friendly, stock 11.0:1 compression. Once dropped onto Pfadt’s solid engine mounts, Kooks 1-7/8-inch long-tube headers and 3-inch exhaust relieved backpressure appropriately for the 625hp bullet. Using the factory computer, Paul Meister at Torq used EFI Live to dial in the custom tune.

To accommodate the bullet, Pfadt made a few other key modifications. The first of which was to lower the engine an inch for a better center of gravity, an old road-racing trick. The second was to mount the custom oil tank for the dry-sump system in the trunk, since the front end was so short on real estate. Reconciling the LS7 pump and accessory drive system was a bit tricky as well, ultimately a few transitional pieces were needed to maintain as many stock components as possible—the main piece being the balancer/crank drive. While this may have been made easier in a full-on race car, maintaining comforts like air conditioning was necessary in keeping it a legit street car. At the same time, converting would keep the LS7 from oil starvation during the intense lateral g-forces it was destined to see. An LS9 oil cooler was also used to maintain oil integrity during track sessions. Last but not least, a heavy-duty clutch was needed to withstand all 580 lb-ft of torque. Since the Pfadt Camaro is all about street reliability and durability, an OEM-based clutch was the natural choice. Katech’s LS9X clutch kit uses the ZR1 pressure plate and twin clutch discs as well as its own six-bolt aluminum flywheel. The light pedal effort combined with the Pfadt shifter, intact (though relocated) air conditioning, and powerful-yet-tame engine combo make the Camaro a joy to drive on the street.

Despite plenty of abuse, the stock transmission and rearend have held up fine, and the Camaro has several accomplishments under its belt already. In 2011, the Pfadt Camaro won the Camaro5 Fest autocross and took 8th in one of the most dangerous and thrilling races in the country—the Spectre 341 Challenge—against full-on race cars and supercars. The 22-turn, 5.2-mile race up a Virginia City, Nevada, road has been called the Nürburgring of Nevada—a fitting test for what has been dubbed the “Ring Spec Camaro.” There is one crucial difference, though, between the “Ring” and this particular piece of asphalt, there are 500-foot drop-offs and no guardrails, hay bales, or other safety measurements that might keep you from driving off the edge of a cliff. This fact Aaron Pfadt knows all too well after having the scare of his life during the final run of the event. In no time at all the crew had the car back into form, though, and ready for the next hill to climb.