A 1965 Chevrolet Corvette Set Up to Annihilate the Cone Competition

Project Management: The Hobaugh’s 1965 Vette is a Wolf in Wolf’s Clothing 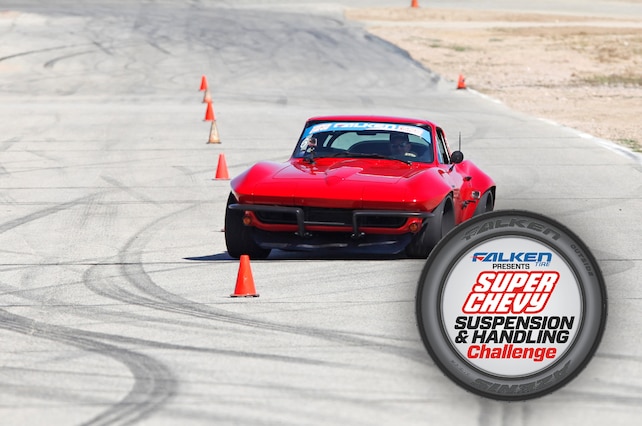 Let’s be honest, classic Corvettes in stock form look a whole lot faster than they actually are. But, in reality, they’re just victims of the technology of their era. And, for the most part, were designed more for slicing through a mountain canyon on a Sunday cruise than being wheeled around a road course. But, like any classic, they can be worked over into something that can handle as good as anything being churned out by Chevrolet today.

A great example of this is the 1965 C2 Corvette driven by Brian and Stephen Hobaugh that was brought out to the Super Chevy Suspension & Handling Challenge, presented by Falken Tires.

This Corvette has been campaigned by the father-son-duo for over 30 years. From the day it left the showroom floor in 1965 it was raced on autocross tracks. Yep, this one-of-771 fuel-injected ’65 Corvette was driven off the lot by the original owner, Ron Christianson, and immediately given fender flares for wider tires. In the ’70s Larry Park enlarged the rear flares and continued fine-tuning the mostly original suspension. That means around 50 years has been spent sorting this car out—and it shows every time it hits a track. It was even the car Brian learned to drive a manual transmission in. But unlike many Corvettes that have been worked over and given new C5/C6/C7 underpinnings, this one still runs many of the original Chevrolet parts.

The aftermarket parts it does have, such as the Van Steel upper control arms and JRi shocks, were carefully chosen and validated as “working” by installing them and hitting the track. Over time this has created a car that flat out handles. In terms of the exterior, Brian is the general manager of a body shop and was able to further work over the fenders to house the massive 315/30/18 Falken tires mounted on each corner. The larger rollers also let him replace the problematic stock binders with Wilwood six-piston front and four-piston rear calipers paired with 11.75-inch Spec-37 Wilwood rotors. The only other exterior mod is a large Lexan rear spoiler to help tame the Corvette’s speed-induced aerodynamic issues.

While many Corvettes like this get modern LS engines, this one is running a vintage 1970 Chevy small-block (don’t worry, the original fuel-injected engine is safely tucked away in storage). Worked over to 364 inches, this mill was built by S&S Automotive in San Leandro, California, to hold up to the punishment Brian knew he would inflict. Filled with a 3.625-inch SCAT crank, Crower rods, and Mahle pistons, the V-8 generates a premium-gas-fueled 11.1:1 compression ratio. The short-block was mated to a set of Brodix heads and topped with a TPiS intake along with a fuel-injection system, while MSD provides the spark and a pair of Hooker headers evacuates the exhaust. The snotty sounding solid-roller small-block puts out 525 hp at 6,400 rpm and 500 lb-ft of twist at 4,700 rpm—more than enough to motivate the 3,170-pound Corvette down the road. Backing this up is an equally “vintage” 1965 M21 trans fitted with a McLeod clutch. It makes for a car that shows how even a few parts, properly installed and tweaked, can really make a difference. Brian, and his dad, Steve, have really managed to craft this project into a force to be reckoned with.

Mary Pozzi From The Driver’s Seat

I must admit I delayed my drive until I couldn’t avoid it any longer as this is “The Car” and has huge notoriety. It’s been featured in many publications. It’s won hugely and is, in many ways, larger than life if you’ve got even a glint of octane in your veins. And, I knew that Steve and Brian Hobaugh rarely, if ever, let anyone get behind the wheel of their car. I let them know I wasn’t going to go goofy or get the red mist, and would take every precaution to ensure that their “forever car” would be returned in the same condition it was given to me. I did this like I did with every other car I tested this day, by simply working the car on the corners yet not hauling the mail on the straights.

Driving the Corvette was an amazing experience as the car was well-sorted and able to be presented to any corner with confidence. When pushed hard, I found the limit a few times as the rear stepped out but was easily brought back with steering. When overdriven, and yes, I was guilty of this a couple of times, I thought I was saddling an eel. Overall, the Corvette drove like it was … lightweight and nimble with reactions to driver input immediate.

This car works great under rotation and for an autocross, this appears to be the best way to get around smooth and fast. For the track, however, my trepidation took hold and there was no way I was going to test those limits with some big ol’ hairy slides. The Wilwoods did their job superbly and after a couple of laps, I found I didn’t have to brake very hard to slow the car down. The brakes were very easy to modulate and provided a smooth, linear response to pedal pressure. Lateral weight transfer was minimal and the chassis felt somewhat stiff, but then this is a performance car driven in competition for the majority of its use. Longitudinally, and under power, weight transfer was amazing and the Corvette had a wonderful ability to put down power smoothly.

I asked Stephen Hobaugh about that “one thing” that is special about the Corvette and the family relationship with it. It was at the 2013 OUSCI and he was walking the paddock area listening to the chatter. “I heard people talking that they thought Brian had won, and it was at that time I realized just how far we’d come, the history, the fantastic drives, and successes, the close bond between father and son, and it got pretty emotional. I’ll never, ever forget it,” Stephen said.

We put Brian Hobaugh’s 1965 Corvette through the wringer on the 420-foot slalom course, the Streets of Willow Springs road course, and the skidpad. And, because some of those numbers are a little ambiguous for those not familiar with the slalom or road course, we paired the car against a 2015 Camaro SS 1LE (which is their Track Pack) for comparison. The Camaro had all the modern technology, but the Corvette was lighter, smaller, and made more power. The 1LE Camaro was edged out by the Corvette on the skidpad and slightly bested in the slalom, but it was trounced on the road course, which says a lot about how sorted Brian’s Corvette is.