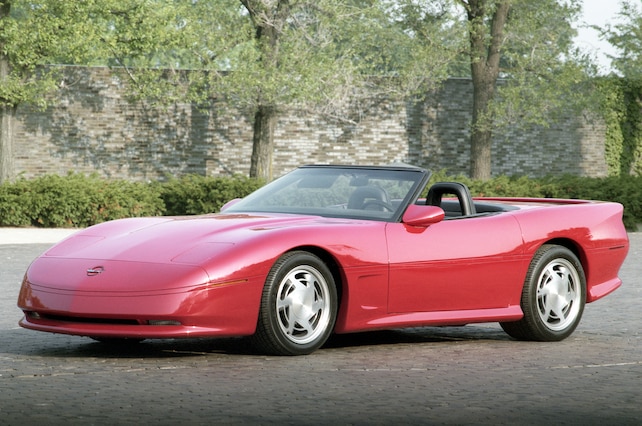 Aside from the Corvette Indy concept car and the CERV III, there weren’t many Corvette show cars during the ’80s. Cars had become astonishingly complex since the heyday of the ’60s when there was a constant flow of Corvette concept cars and show cars. Designers and engineers had enough to do just keeping up with the latest crash and emissions standards. Besides, for the first three years of the C4, sales were pretty good. In 1984, 51,547 Corvettes were sold—the second best sales year ever. Sales dropped to 39,729 in 1985—still not bad, and in 1986 the convertible was back, although sales dropped to 35,109 units. So, there wasn’t a burning desire for a mid-cycle refresh for the Corvette. But deep inside the design studios of Chevrolet, new ideas were being fleshed out around the clock. The 1988 Geneve show car was one of only a few ideas got out the door for public viewing.

ASC (American Sunroof Corporation) of Southgate, Michigan, was founded in 1963 by Heinz Prechter and specialized in sunroof and convertible conversions, lift-out roof panels and custom interiors. The company also designed all of the parts, mechanisms and electrical components for its various conversion projects. Prechter performed R&D work for all of the Detroit car companies, many European car manufacturers and even did work on a few of George Barris’ custom cars. ASC launched a Corvette convertible development program in 1984 that eventually arrived in Chevrolet showrooms as the ’86 Corvette convertible.

As an R&D developer for Chevrolet, the ASC team was aware of the Corvette Indy project. Armed with this knowledge, ASC created its own styling analysis of what a “Corvette Indy-inspired C4” might look like. Design VP Chuck Jordan and Sr. Designer John Cafaro both blessed the concept art, and ASC was given the green light to build a prototype.

Concept cars are always “far-out.” Prototype and show cars are much closer to real cars. ASC looked at the Corvette Indy and asked, “What would this styling look like on an existing Corvette?” This means that the basic structure must be the same as the production car, but bolt-on body parts are free game for alteration. The Corvette Indy had wild proportions and applying those styling cues to an existing Corvette would be quite a challenge. When ASC’s version of an Indy-style C4 was finally completed, it had subtle hints from the Corvette Indy concept car, but it looked like a real production car.

ASC began the Geneve project early in 1987 with a stock, 230hp Corvette that would serve as an armature for the new body parts. This wasn’t an add-on body kit; it was a re-skin of the existing C4. The Corvette Indy could be characterized as “smooth and sleek.” The ASC team set out to emulate that aspect of the Corvette Indy. Why ASC never offered a body kit for sale to the public is a bit of a mystery, probably wrapped up in legal agreements with GM.

The front auxiliary lights were mounted under the bumper and integrated with the new front spoiler. The hood dome was simplified with a single bulge instead of the twin bulges of the stock design. Front and rear wheel openings were reshaped to incorporate new side sills that flared out and were integrated with the rest of the body, with front fender vents that looked somewhat like those used on the C5. The rear end design had a low top deck spoiler that jutted out, as well as a lower valance spoiler. LED taillight lenses were flush mounted, and the side marker lights were integrated into the body side molding. Side-view mirrors were faired into the A-pillars.

The interior featured custom seats with open headrests, charcoal suede leather inserts and black leather trim. With the blood red paint and new 17-inch, 12-slot wheels that came with the Z51 and Z52 suspension packages, the car looked fantastic, like a contender for 1990 production Corvette.

At the 1988 Geneva Car Show, Jordan and Cafaro were very impressed and ordered new exterior, interior, and power top styling studies. The ASC Geneve was a hit. Before the car went to Geneva, spy photos showed up in the magazines as the “The Next Corvette!” So, an inquiring mind wonders, “So what happened? Why did the Geneve concept go nowhere?”

Storm clouds were definitely building inside GM in the very late ’80s and early ’90s and once again, the Corvette’s very survival was in question. The prevailing attitude seemed to be to stay the course with incremental changes in details and overall engineering improvements, while GM’s brass and bean counters decided if there would even be a replacement for the C4.

About as close as the consumer public got to the “Geneve look” was the Mears-Shinoda full body kit. Legendary Corvette designer Larry Shinoda designed the body kit and four-time Indy 500 winner Rick Mears was the front man. “Specialty cars” such as the Mears-Shinoda Corvette tend to be very expensive because of the intense labor that goes into the body and coachwork. Consequently, only 11 units were built. Interestingly, one of the body kits was wind tunnel tested by GM and it was found to have a drag coefficient of 0.30 versus 0.34 for a production Corvette. Good-eye, Larry!

For what its worth (27 years later!), I believe the Geneve look would have been a stunning refresh, not unlike the jumps between the ’72 and ’74 Corvettes, then the ’79 and ’80 Corvettes. Still “Corvette” evolved, a little. The automotive press is always been hungry for Corvette appetizers, and the Geneve Corvette show car was a very tasty treat.

Don Herbal's 88 Callaway has avoided two dangerously near misses with fire to survive today as a tire shredding racer.

Check out this custom 1988 Chevrolet Corvette Convertible, brought to you by the experts at Corvette Fever Magazine.

Check out this 1988 Chevrolet Corvette Coupe, brought to you by the experts at Corvette Fever Magazine.

In this feature article VETTE profiles Laurie Schwab, for whom the Chevrolet Corvette is the fulfillment of a dream, a way of life - Vette Magazine