A Silver 1960 Chevrolet Corvette Mined from a Barn in Vermont

Silver Mined: Digging out a barn find Gen One 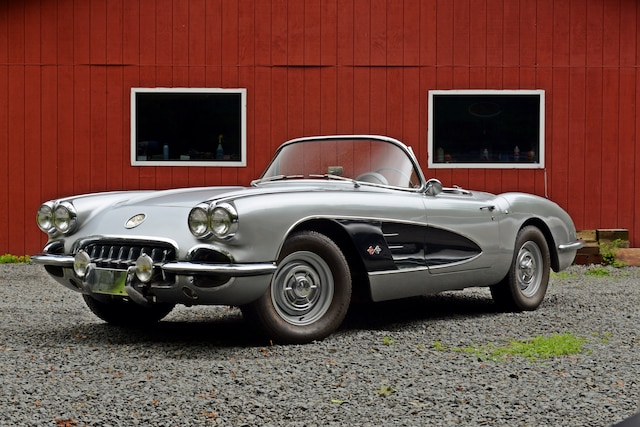 Gary Clairmont needed to sell his car. The South Burlington, Vermont, resident decided the time was right to pass on his 1960 Corvette – a car that had languished in his garage silently for the better part of four decades. He received the stylish ride as a gift from his parents in the late ’60s; a present that any young man would surely cherish. And now his longtime daily driver was ready for a new home.

Not knowing how to go about selling his ’glass Chevy, he called a good friend with more knowledge than he. He in turn called another friend who was getting work done on his own Corvette over at The Early Vette Shop in Shohola, Pennsylvania. Mike Walsh, the proprietor of the shop, was interested from the get-go in Gary’s Gen I, as he’s been restoring and collecting these early models since his road-ragin’ teenage years.

Mike got in touch with Gary’s friend who in turn supplied him with some photos and basic information on the car while it sat in its barn fresh state. Being locked away for 40 years on four flats didn’t deter Mike at all, as he negotiated a deal with Gary, and then immediately (the next day) headed up to New England to claim the car.

When Mike arrived, he quickly spied his prize; a well-preserved ’60, built-up with touches of someone’s personal vision of what the Corvette should look like. Since it was covered most of those years, the car had minimal dirt and dust on its flanks, and looking all the part of a car that had a relatively safe slumber for the last four decades. There was one glaring issue that presented itself right away; the tires were shot! No problem here as Mike thought ahead, grabbing four good wheels and tires from his shop before making the trip north.

However, that wasn’t the only issue that lay ahead, and luckily Mike was more than ready. He figured the wheels and brakes would be seized, so appropriate tools were brought along for the ride. First off, the wheels needed some coaxing to get off of the hubs. No problem there. After that, the brakes were found to be seized-up and immobile. A big hammer helped free the drums and get the Corvette moving again. Once the wheels and tires were replaced the ’60 was loaded onto Mike’s box trailer for the ride back to Pennsy.

Once home, more issues arose. The shifter seized up … stuck in Park. Not a problem for Mike, who’s had years of experience pulling dead Corvettes out of long-term parking! He removed the shifter from the equation and once again got the car rolling.

Could he get this dormant car started? The engine appeared stuck a bit. A dose of Marvels Mystery oil was poured into the intake. Mike and his brother Joe lightly rocked the car back and forth. A fresh battery was put in, and then some gas and oil mix was put down the carburetor’s throat. The oil helps to seal around the pistons. With a little prayer first, the car soon jumped to life.

Not only did it run, but it ran well. And amazingly, there were no issues whatsoever. All gauges sprung to life, lights popped on, and even the horns sounded crisp. The added foglights up front worked perfectly. It’s an amazingly original car; even the wheel cylinders had the correct ’59 date-coded parts still intact.

Cosmetically, the paint was in great shape. The last owner stated that he touched up the outside silver sometime during his tenure, and decided to keep and clean up the cool custom black paint as well. The accents were done before Gary received the car in the mid-’60s. The bumpers needed very little to get them to shine, and are basically pit free. Overall, there was only one real issue with the car; a repaired framerail on the passenger side, that Mike decided he would do something about at a later date.

Mike inspected the drivetrain thoroughly. In the engine bay sat a good running 283 four-barrel engine. He had reason to believe that this was not the original engine, due to many of the accessories that looked original to the car. First off, the generator had the correct numbers for a factory dual-quad car. Next, this Vette’s distributor was only used on the dual-quad cars. The five-blade fan and clutch, along with the 6,500 redline, generator-driven tach once again backed up the concept that a dual-quad setup came with this particular ’60 Vette.

Mike was stoked about his finds. The 270hp dual-quad 283 was the highest horsepower engine you could get in ’60 without fuel injection. He decided then and there that he would source out a correct date-coded block for future installment. And amazingly, in his stash of parts he’s collected over the last 30 years, he had the correct intake for the 270hp car. He sourced the OEM carbs and had them rebuilt. In the future this engine will be built up to spec, to return the original “born with” powertrain back to this Vette’s engine bay.

In 1966, Gary Clairmont was a 17-year old graduating high school in South Burlington, Vermont. He decided to stay local, enrolling at the University of Vermont in nearby bustling Burlington. His parents decided to reward his hard work in school with the gift of motorized freedom, a way to easily commute the few miles back and forth to college. Gary’s dad had a friend with a cool custom Vette that he was ready to part with. With that notion, a deal was struck between the parties, and the hot Corvette exchanged hands.

Gary wasn’t a car guy per se, but he loved his new ride. Hell, who wouldn’t? He travelled the few miles to college all year long in the sleek Chevy, even coming home for lunch on occasion when time allowed. Gary vividly remembers a day when he jumped in the Vette at lunch and was just “enamored” with how great the car sounded that day. It was just so deep and throaty. After a brief run home, he headed back to school, and noticed that the same particular parking space he had left from prior was still open.

Well, there was for good reason for that. You see, Gary left a calling card there on the ground that day; one of his Cherry Bomb mufflers and tailpipe were still there in the parking stall, the exhaust piece rotting off the bottom of the car while it was parked. It was a reminder of how harsh the salt-laden winters of Vermont could be on your particular means of transportation.

After college, Gary scored a job nearby at IBM. The ’60 was still his daily driver, and it got him to and from work on a daily basis. He also met his wife during this time, and had his first of many dates in the car. But by the mid ’70s Gary decided to put the car up on blocks and retire it from the daily grind. He went on to purchase another car, well, another Corvette to be exact – a ’71 T-top – which would pull its daily weight for the next 7 years.

So now Mike is in the process of returning the Corvette to its original OEM state. Due to damage on the chassis, he’s decided to replace the original frame with a correct piece he’s had stored over the years. The date-correct block will go into the car along with the proper intake manifold and dual-carb setup. But that sweet running 283 will not go to waste, it will find its way into another Corvette in Mike’s field of needy glass-bodied Chevys.

So in the near future, this beautiful Corvette will once again roar the way it did straight from the factory. Another car saved, and soon once again another sweet dual-quad Corvette will run wild on the streets.