Motorama 1954: A Look Back at Chevrolet’s “Other” Corvair 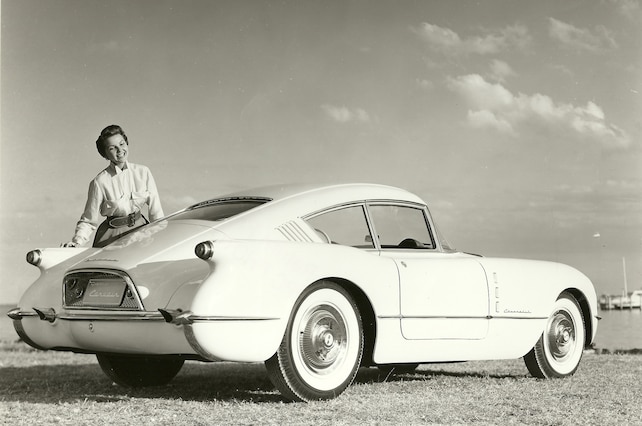 The Corvair was essentially a Corvette wearing a fastback roof. The powertrain was shared with the production car, as was the interior, save for some chrome trim accents and custom-made seats.

But really, when a car is on a show turntable, the interior and engine aren’t as important as the exterior design. In this case, GM’s stylists got the proportions just right, with the 51-inch-high aerodynamic roof slanting back into what looked like a jet’s exhaust port (but was just home to the rear license plate and backup lights). Vents were set into the front fenders and the hood to let hot engine air out, while C-pillar vents could be opened and closed by the driver for fresh airflow into the interior.

Opinions vary as to how many Corvairs were made. The car debuted in January 1954 at the Motorama in New York wearing jewel-like red paint, but when it was displayed in Los Angeles in March, it was painted Seafoam Green, as seen in this GM publicity photo. Does that mean there were two, or was the one repainted? One of our resources, David W. Temple’s excellent book GM’s Motorama, says “almost certainly two examples were built.” But according to the GM Heritage Center, no paperwork exists to verify a second car.

It would take nearly a decade for GM to revisit putting a fastback roof on a Corvette, but most would agree the split-window 1963 Sting Ray was worth the wait. As for the other Chevrolet product to wear the Corvair name, well, let’s just say opinions are a little more mixed.