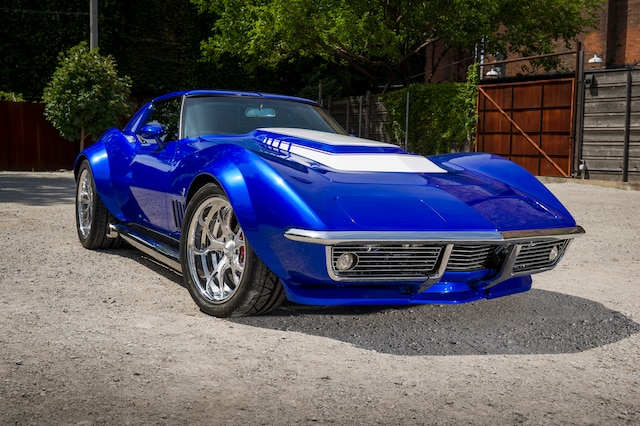 After you read enough stories about what inspires gearheads to buy and build classic cars it often involves exposure at an early age. This is exactly how Wayne Sanchez Jr. got the Corvette bug. As he told us, “I’ve always been an avid Corvette fan. No, not the numbers-matching kind, but I do appreciate those as well. When I was 4 or 5 years old my dad, Wayne Senior, bought a blue 1972 Corvette with a Targa top with aftermarket side pipes. That was my first exposure to Corvettes and was fascinated with how Vette drivers wave to one another, which seems to be a lost art these days.” Wayne grew up, but he never outgrew his attraction to C3 Corvettes and would often pester his wife, Karen, about buying his own to fix up, but he was often shot down in flames. “I had found a 1969 Vette at a local body shop that was done up like my dad’s and kept driving by to check it out. One day I noticed a ‘For Sale’ sign on it and immediately went home to ask ‘the accountant,’ but the answer was once again a firm ‘no.’ A few months went by and I noticed the car was no longer at the shop,” recalled Wayne.

About a month later Wayne’s wife greenlit getting a Corvette, but the car that really caught his attention was gone and nothing else got his pulse racing. Then one day on his way home from work he spied the Corvette sitting in front of the same body shop with a For Sale sign back in the window. Wayne went on to say, “I stopped in and talked with the owner about the car and its history. The car had a recent paintjob, but needed the clutch fixed. It wasn’t numbers-matching and was far from original. I drove the car and even with a shaky clutch it was still a blast. So, in September 1995, I paid $10,500 and finally had my Corvette! Over the next 19 years I rebuilt nearly the whole car, but in the end it still drove like an old car.” This is the point where Wayne’s wife, Karen, made up for shooting down his plans so many times. You see, Wayne was considering ditching the Corvette for something that drove better. “Well, she asked if I was tired of my Corvette and I explained that I loved the car, but that I was tired of how it drove. Karen then went on to ask me what it would take to make the Corvette right. To be honest I hadn’t thought about making this car fit my vision instead of finding a new car.” So, with his wife’s support Wayne went looking for a shop to breathe life into his Vette. It took a while, but he eventually hooked up with The Restomod Store in Independence, Missouri. After working out a build plan with the shop owner, Mike Mclin, Wayne and his dad delivered the Corvette from Illinois for a complete makeover.

The Corvette was completely blown apart and Mike, along with his two sons Michael and Chris, started working over the body. A custom-built steel air dam, retro fender flares, and an L88 hood gives the Corvette tons of attitude, while the stunning House of Kolor blue paint and white graphics ratchets up the aesthetics even more. The frame was powdercoated and fitted with a complete Stage VI Shark Bite suspension system from Speed Direct along with QA1 coilovers on all four corners. GM C6 Corvette brakes, with 13-inch rotors take care of the braking duties and are nestled in 18x9 front and 19x12 rear Boze Clutch billet rollers.

The old 350-inch small-block was ditched in favor of something considerably more modern: a 6.2L Chevrolet Performance LS3 crate engine. The Restomod Store slid in a new camshaft along with better pushrods and topped off the LS3 with a Top Street Performance fabricated intake manifold. The LS vents through a set of Stainless Works long-tubes mated to a Hooker exhaust system with Vette side pipes. The combination sounds bitchin and puts 458 hp to the rear wheels. A Be Cool radiator sheds engine heat while a Classic Auto Air Sure Fit system modifies the cabin temps. For functional good looks there’s a complete Concept One pulley system and the engine is dressed in a set of coil covers from Clayton Machine Works. Backing up the LS is a Tremec T-56 six-speed, fitted with an LS7 clutch, which spins power back to the 3.73-geared posi rearend.

With the drivetrain and suspension modernized it was time to give the interior equal attention. Black and grey Procar seats were added by The Restomod Shop along with yards of Ultra Leather on the dash, doors, seats, and custom-fabricated center console. Dakota Digital gauges track the vitals while a Billet Specialties steering wheel keeps the Corvette pointed down the road. A fresh set of window glass from Zip Corvette gives the passengers a sweet view of the scenery rushing by.

This Corvette has been a 20-year journey that actually started long before the car was even purchased. And now it’s even come around full circle as Wayne has gotten to give his kids rides and teach his oldest how to drive a manual in it. With a bit of luck they will someday be inspired to build a car like dad had.