Be Your Dog: One man’s path to auto eroticism 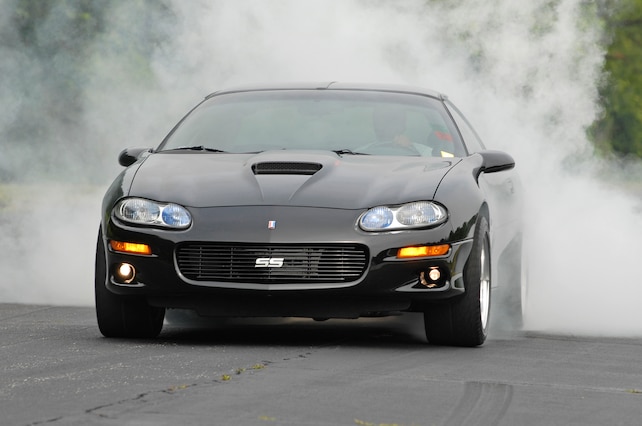 Shooting a feature for a magazine, a local law enforcement officer witnesses us in the peak of a smokey burnout. He’s somewhat irate … at first: The cop says, “If I see this kind of behavior again, I’ll escort you out of here.” We explain to him our motives for the tire-shredding exhibition. His tune suddenly changes. “Oh, cool. Is this your car?” I’m like, “Yeah.” He says, “Will you take me for a ride?” I’m like, “Yeah, if you apologize!”—Nick Harrison.

It wasn’t made from sticks and mud. It wasn’t custom-built. It wasn’t conceived in the back seat of a 1960 Rambler wagon. In the grand scheme of things, this is the story of a remarkable car, but one that thousands of you already own and enjoy. And it used to be you could get an SS Camaro at any participating Chevrolet store.

Then it went away just like they said it would, SS and all. It was 2002 and Chevrolet was already on its way to becoming the prime purveyor of family oriented cars and trucks, not performance cars.

It forgot all about “win on Sunday, sell on Monday.” Years prior, it tried to get some sack with a lively, delightful C6 Corvette advert that depicted a 10-year-old kid (the quintessential you and me) grabbing gears and literally flying all over the place, including over other cars. Clearly, the truant driver was thrilled by his new pastime. What a ride!

After concerned mothers righteously stormed the castle yapping irresponsible oversight, Chevy shrunk up tight and x-ed the clip forever. It didn’t make it past a couple of days. Think a head or two rolled over that one? As a matter of fact, the Bow Tie Boys haven’t been very helpful or encouraging to the die-hard legions since the mid-’80s and were it not for aftermarket outfits like SLP Engineering, you wouldn’t be looking at this SS, either.

Lanky Nick Harrison’s 2002 is one of 1,994 black coupes built that final year and one of 1,349 equipped with a six-speed manual. He and his contemporaries have a real factory hot rod. He and others tend to drive their real factory hot rods a couple of hundred miles a week (or month) almost as if it were their sole mode of transportation—just like it might have been back in the day. As such, Nick has touched lightly but firmly on several important areas of the car, concentrating on all stance and appearance, enhanced throttle response, handling and braking power, and insisting that he have a hand in every bit of it.

“I made every modification myself, top to bottom. I don’t trust anybody touching my car. I love to try things and to learn on my own.” This is what Nick did, top to bottom.

He bought the car in November 2004 and has been modifying it since. The first order was to stiffen up the chassis with Kenny Brown double-diamond subframe connectors. Knowing that the car would soon have a proper-sized exhaust system, he pulled the muffler and put a MagnaFlow in its place. A scant six weeks later, his habit began to gnaw.

Jet-Hot ceramic-coated long-tube headers with 1 3/4-inch primary pipes channel into a custom 3-inch Kooks ORY pipe in a system built by Ray Pless (Bowman, Georgia). Noxious gases pass through a Rumbler cat-back assembly from Texas Speed. It is integral with a Power Stick chambered muffler. The tailpipes are finished off with Corsa look-alike double-wall tips. For a measurable increase in throttle meat and for style, it needed a livelier camshaft. The effects of long-tube headers, a free-flowing exhaust, and some minor bolt-ons in a stock displacement LS1 engine are positively magnified by a hairier camshaft—a phenomenon we’ve witnessed many times in the dyno cell. To prepare for this, Nick included COMP chromemoly pushrods and installed Patriot Performance Gold dual valvesprings.

“For months I looked, I searched, and asked many questions trying to choose the right one,” said Nick. “I narrowed it down to three and then chose a COMP Cams custom grind. It has 232/240 degrees of duration at 0.050-inch, but the lift stays a secret.” Let’s follow the power progression as outlined by three sessions on the chassis dyno. Nick skipped the baseline and went right for the modified curriculum: SLP air lid and K&N filter, TB bypass, and the MagnaFlow muffler produced 336 hp and 349 lb-ft of torque. Round two included all the exhaust upgrades (including solenoid-controlled cutouts) and brought the output to 350 hp and 360 lb-ft of grunt (open cutouts allowed no increase in horsepower but added 4 lb-ft to the torque total). The third dyno session revealed the efficacy of the COMP camshaft that helped the 346-incher generate 415 hp and 396 lb-ft of torque to those big back wheels.

Though the fourth-gen represents the epitome of Camaro handling, there’s always room for more. Readying the SS for its influx of power, Nick installed a UMI adjustable Panhard rod, lower control arms, and the relocation brackets for them. Eibach coils especially prepared for GMMG settled the body at the preferred ride height, and the Kenny Brown subframe connectors brought the whole package together. KYB shock absorbers stifle wheel movement, and a shock tower brace provides an extra measure of rigidity to the chassis.

As for the big friction factor, OE calipers carrying Hawk HPS pads clamp down on honkin’ Brembo rotors. Nick made the big visual statement with polished American Racing 200S rims, 9.5 inches and 11 inches wide, respectively, and combined them with Falken 275/40-17 ZE 502s and BFG 315/35-17 G-Force Drag Radial 2s. So far so good. Nick didn’t relate any sticky tire-related tribulations with the 10-bolt axle that’s fitted with a Torsen differential, 4.10:1 gears, and Moser axleshafts. The LS6 stock clutch still works plenty good with the T-56 transmission, but according to Nick, tends to slip a tad when it’s hot.

Black cars have a distinct psychological advantage. They appear sinister and tend to intimidate. Though Nick’s Camaro assumes a regal bearing, it does a poor job of shading its aura of ruthlessness. It elicits the fight-or-flight response that can put certain people over the edge. Considering that, Nick made an important change to the car’s exterior appearance. For the final cohesive step, he brought in a billet grille and had it powdercoated dusky. On the inside there are few clues as to what this car’s avocation might be. A combination of Stewart-Warner and Auto Meter gauges coexist with the stock arrangement that has been spiffed up immeasurably with Macewen Motorsports silver overlays.

“My car has won numerous First Place awards at car shows and cruise-ins. I enjoy showing it, but the awards don’t mean anything to me. I’d rather 10 people come up and ask me a question about my car or say that they really like something on the car, than to win an award. At the end of the day, that award will be somewhere collecting dust. I reached my goal with this car, and that was to be featured in a national magazine. So now I can put this aside for a while and get started on the next project. I haven’t forgotten about my first love, my 1989 Camaro. I plan to restore it. I plan to go with some bad crate engine and the rest will be a surprise.”