Here is the Coolest Camaro from SEMA 2015 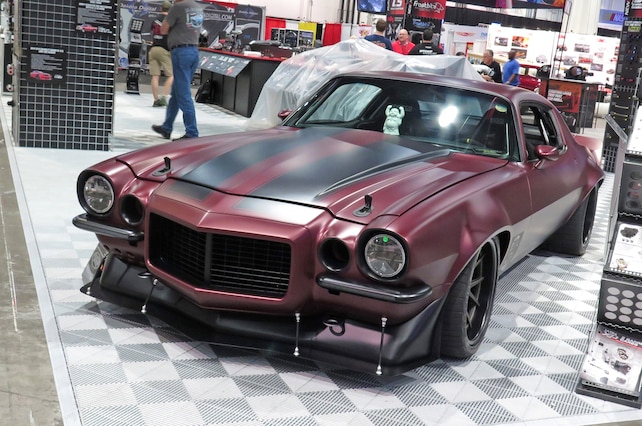 Heading into SEMA, there is no doubt you are going to run into a car that will cause a huge stir among just about every automotive journalist in attendance. That was exactly the case when we came across Paul Van Nus’ 1971 Camaro. Now, Pro Touring second-gen’s aren't groundbreaking by default, but Paul, his Father Joe and the crew at Dutch Boys Hot Rods in Kalamazoo, Michigan, built one with a personality all its own – not an easy task among the sea of corner-hugging, LS-powered F-body’s that roll across this great nation.

We’ll be doing a full feature on this car in Chevy High Performance magazine and on chevyhiperformance.com in the very near future, but for now we wanted to give you a glimpse of this killer LS7-powered Camaro from the 2015 SEMA show.

Paul informs us that once the SEMA show is over; it’s on to track days for testing followed up by a full schedule of events in 2016. By the looks of it, this car will be a contender wherever it shows up as it’s got plenty of game in the horsepower department (700 hp) and plays host to Detroit Speed Inc. suspension components front and rear adorned with JRi shocks all around. Baer 6S Brakes with 14-inch plates on all four corners bring this burley beast to a stop in quick fashion. Forgeline GA3C Concave wheels (18x11.5 front, 18x12.5 rear) wrapped in BFG rubber (315/30-18 front, 335/35-18 out back) provide the adhesion compound for maximum grip.

The aforementioned LS power plant honors a host of Holley goodies including a Dominator EFI system and Hooker Headers just to start, while a Tremec Magnum six-speed trans sends twist to a 9-inch rearend.

With all the excitement under the hood and within the chassis, the exterior offers a unique satin finish that we are calling out as the latest trend to take shape in the Pro Touring muscle car world. The PPG Checkered Past pigment looks ideal covering the Carbon Kustom carbon-fiber hood and requisite sheetmetal, which altogether make this one of the coolest Chevy muscle rides we’ve come across at the 2015 SEMA Show.

With that said, we are looking forward to checking out this sweet second-gen tear up some tarmac in 2016, and if Paul Van Nus has his way, the Dutch Boys Camaro has a good chance of leaving the latest crop of competition in the dust.