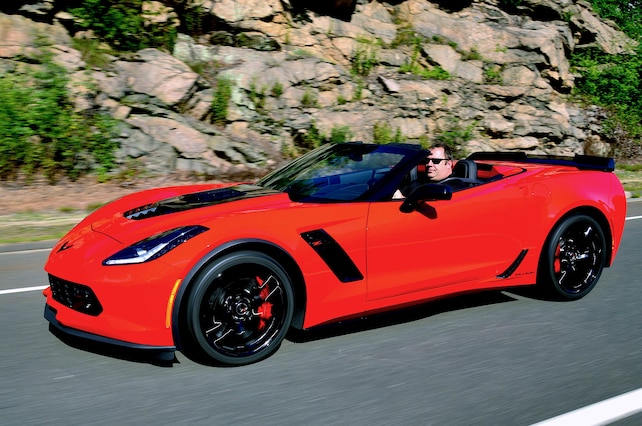 Can the awesome C7 Z06 be improved? Engineers at Callaway Cars have done the impossible. In April 2015, Callaway’s Program Manager Chris Chessnoe unveiled the company’s prototype Z06 engine package at the National Corvette Museum’s Birthday Bash. At the time, Callaway had not finalized the power figures, but Chris said it would produce over 750 hp. He was correct, shortly before Corvettes at Carlisle the power ratings were announced. The $16,995 package bumps the Z06 from 650 to 757 hp at 6,200 rpm. Torque climbs from 650 to 777 lb-ft at 4,500 rpm (SAE). This change makes the Z06 leap to 60 mph in 2.8 seconds and runs a sizzling 10.5 quarter-mile at 131 mph (on OEM tires!).

We were anxious to drive this new Callaway, especially one equipped with the eight-speed automatic transmission. We have driven a stock Z06 with that transmission and we wanted to feel the difference. The company does not currently have any test cars available to loan us for a test drive but Chris invited us to Old Lyme, Connecticut, to drive one of its development Z06s. Rather than flying to Connecticut he asked us to drive their 2014 Stingray-based SC627 from Florida to Old Lyme. It seems that the car had to be left in Florida by his brother Mike after a dealer meeting. So he offered us the key fob to the Night Race Blue C7 and we gladly accepted his invitation. Our reward (Yes, I know driving the SC627 C7 should be reward enough.) was the opportunity to take a first drive in an SC757. Our trip north was uneventful, the SC627 had endured over 27,000 hard miles and it was quiet and comfortable. We averaged 27.4 mpg and drove through a variety of road conditions, including very heavy rainstorms.

Once we arrived at Callaway in Old Lyme we toured its conversion facility (they also have ones in Santa Ana, California, and Leingarten, Germany). Four new Z06s were sitting outside the shop waiting for conversion. Three new LT1s were also waiting to get their SC627 package installed. Inside, technicians were working on a Torch Red and a Shark Gray Z06, as well as a Jet Black Tahoe. The whole conversion process takes two to four weeks, depending on the backlog of orders. We witnessed two labor-intensive activities in the shop. Both are performed by hand. The first was the handcrafted stainless steel exhaust, and the second was the cutting of the factory hood to make room for the supercharger. After our shop tour we spent some time with Mike Zoner, Managing Director at Callaway Cars in Old Lyme. We asked him what additional challenges they faced developing the Z06 package compared to the Stingray. He told us: “There are mechanical constraints between the two engines. The cylinder heads are different, but the construction of our supercharger is modular, so it is adaptable. Both applications have triple intercoolers, but the Z06 requires more air because of our larger unit (2300cc vs 1740cc). We designed different runners that are bolted to the cylinder heads. We made sure to condition the air the best way possible by matching the heads to the runners to be as flow-friendly as possible. We also increased the manifold pressure over the standard Z06, which helps us make more power.” Chris let us know it was time to take our drive. We thanked Mike for his time and followed Chris to the parking lot.

There, waiting for us was a Torch Red Z06 convertible equipped with the Z07 package (carbon brakes, spoiler, side skirts and front splitter). However, it was a seven-speed manual not an eight-speed automatic, but we were not complaining. On the road our Z06 was quiet and had no bad manners. The only inkling that this was a tuner car was looking at the top of the supercharger poking out of the hood. Chris directed us to a private test road that would give some room to exercise the beast. When we arrived he grabbed onto the handle on the dash and gripped it tightly. We rolled out at 25 mph and the 500 lb-ft of torque immediately took hold. The throttle was not explosive, but acted like a turbo coming onto boost. The higher the tach climbed the harder we were pushed into the seat. It seemed like a nanosecond until we had to pull another gear. This car has amazing power that just keeps pulling. It would be fun to drive this package on the Autobahn. We are confident it would push past 200 mph if it were installed into the more aerodynamic coupe. This Corvette drives like a mild-mannered Clark Kent until you push the loud pedal and then it becomes a supercar. Driving this Corvette was an amazing experience and we thank Chris for the opportunity.

We wanted to drive the automatic and asked Chris to keep us in mind if an opportunity arose, and he agreed. Shortly after our Old Lyme trip we were attending the 21st National Corvette Museum Anniversary event when Chessnoe called us. One of his customers, Ivan Schrodt from Wisconsin, had taken delivery of his eight-speed automatic Laguna Blue Z06 that we saw in the parking lot at Old Lyme. Chris asked Ivan if he would allow a crazy journalist to drive his new car. He immediately said OK! We quickly found a place where we could exercise his 1,500-mile Laguna Blue beast. All I can say is you better hold onto your shorts! This car is a rocket, the eight-speed selects the right gear instantly and the engine is always in its sweet spot. In a recent interview with Corvette’s new plant manager Kai Spande, he told us that eight-speed automatic Corvette orders are approaching 80 percent of the total C7s that are built. It’s no wonder why. As we returned to the NCM, Ivan looked over at me and said, “That is the biggest grin that I have ever seen on someone! You must have been impressed?” Ivan, thanks for giving us the ride of a lifetime in your SC757 Callaway Corvette.

In closing, this may not be the fastest Corvette in the world. However, when you purchase one through a Callaway dealer, it comes with a 3-year, 36,000-mile warranty. This warranty covers all Callaway installed components. The remainder of the factory GM warranty also remains in effect. The best news is you can climb into this Corvette, take it shopping or cruise cross-country comfortably without any bad manners. Visit www.callawaycars.com for more information.

Callaway Cars has three locations where its vehicle upgrades take place: Old Lyme, Connecticut (in the photo); Santa Ana, California; and Leingarten, Germany. The 757hp Z06 is the company’s latest offering. The blue LT1 C7 in the background is fitted with a 627hp upgrade.

Instead of flying to Old Lyme, Connecticut, Chris Chessnoe invited Team Vette to transport its 2014 SC627 from Florida to Connecticut. We covered a lot of pleasant miles in the 2014 C7 prototype. It showed 28,672 miles on its clock during our drive through a heavy rainstorm in Virginia.

When we arrived in Old Lyme, Chris gave the Night Race Blue SC627 a much-needed bath before our photo shoot. We received a lot of positive comments on this car as we made our journey to Connecticut.

The three new Z06s in the foreground are awaiting conversion to the 757hp upgrade. The Torch Red seven-speed manual convertible in the background was recently completed and served as one of our evaluation cars. The Laguna Blue eight-speed automatic coupe we drove at the NCM belongs to Ivan Schrodt.

The Callaway Gen Three supercharger is 32 percent larger than the unit fitted to the Z06 (2300cc vs 1740cc). It has a Callaway-designed casting that surrounds two additional longitudinal intercoolers for added cooling. This improves the effectiveness of the standard intercooler that is built on the top of the unit.

Callaway selected the Eaton 2300cc TVS supercharger because it is OEM certified and has a proven service reliability history. Inlet air temperatures increased less than 10 percent during multiple runs at the dragstrip.

This is what the completed installation looks like in the car, the price is $16,995 (this includes a $2,500 credit for the OEM supercharger). It is a very neat and tidy installation.

When the conversion begins, the factory hood is removed and a template is attached. An opening is carefully cut out in the middle of the hood to make room for the supercharger. Callaway technician Eric Perkins carefully finishes the opening in the hood.

This is how the finished hood opening looks. The top of the supercharger is exposed to outside ambient airflow that provides convective cooling to the intercoolers. We never experienced any performance difference, even when the outside temperature was 92 degrees.

Each car gets this custom Stingray shown on the right that has the supercharger imbedded into it. The round Callaway medallion is attached to the Corvette’s key fob.

The optional ($2,890) Callaway Double “D” exhaust is handcrafted at Callaway’s facility. It produces a robust rumble at idle and is aggressive sounding when you lean into the throttle. However, at cruise it is quieter than the OEM exhaust. The factory NPP butterfly electric controlled feature is not available with this option.

Callaway’s Program Manager Chris Chessnoe drove this seven-speed manual Z06 ’vert for our photo shoot. It is very difficult to notice the supercharger poking through the hood with the black hood insert. This really makes it a great sleeper. With 757 hp on tap, watch out!

Callaway customer Ivan Schrodt brought his 1,500-mile, eight-speed automatic Z06 to the National Corvette Museum. He invited Team Vette to compare his eight-speed automatic to the red seven-speed manual convertible that we drove the previous week. All we can say is this car takes your breath away. The automatic is a perfect fit with this car.

Ivan is a true Corvette and Callaway enthusiast and we really appreciate him giving Team Vette the opportunity to exercise his beautiful Laguna Blue Callaway.

An anonymous source reports a lap time at the famous German road course that will put the 2015 Corvette Z06 in the pantheon of production supercars.